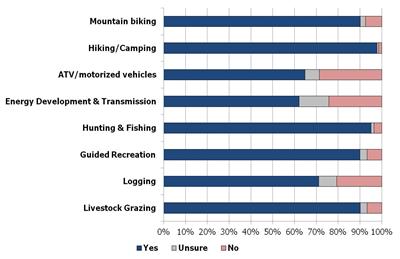 The new survey conducted by the University of Idaho Social Science Research Unit for the Idaho Rangeland Resource Commission (IRRC) was based on 585 telephone surveys with Idaho residents. The poll was completed in December 2014. More than half of the survey participants have lived in Idaho for more than 30 years, and participants represent a diverse cross-section of political ideology, UI officials said.

Public support for livestock grazing was approximately 20 percent higher than it was for logging, which had a 71 percent approval rating. Using public lands for energy development and transmission lines received the lowest level of support at 62 percent. Public approval of livestock grazing on public lands went up 1 percent since 2010, and 10 points since 2001, according to previous polls conducted for IRRC by the University of  Idaho.

“We’re pleased to see public support for livestock grazing on public lands increasing,” said Chris Black, IRRC board chairman and a Bruneau Rancher who has received a BLM national stewardship award for exemplary livestock management on public lands. “We think Idahoans are seeing improved range management when they’re out recreating on rangelands and forests. And over the last five years, we’ve highlighted more than 30 stories of ranchers engaged in rangeland stewardship through the Commission’s “Life on the Range” web site and video series.

IRRC officials said they commissioned the poll to understand the overall perception of Idaho residents about grazing, and how those perceptions might be evolving due to changes in Idaho’s population demographics and the emergence of the “New West.”

In a wildlife-related question, the poll found that 84 percent of the respondents recognize that private ranchlands provide important wildlife habitat. On a scale of 1-7, 68 percent of the  respondents rated the value of private farms and ranches for wildlife as being a 5 or higher.

The poll is statistically valid, sampling a broad cross-section of Idaho’s rural and urban residents, an equal number of males and females, and mobile phone users as well as landline users, UI officials said. Click here to download the full report.

About the Idaho Rangeland Resource Commission: The Idaho Rangeland Resource Commission is an Idaho state agency that seeks to increase public understanding about the balanced management of public rangelands. The commission sponsors the award-winning web site, www.lifeontherange.org, and it provides information and educational materials to Idaho’s school children. For more information, see www.idrange.org.