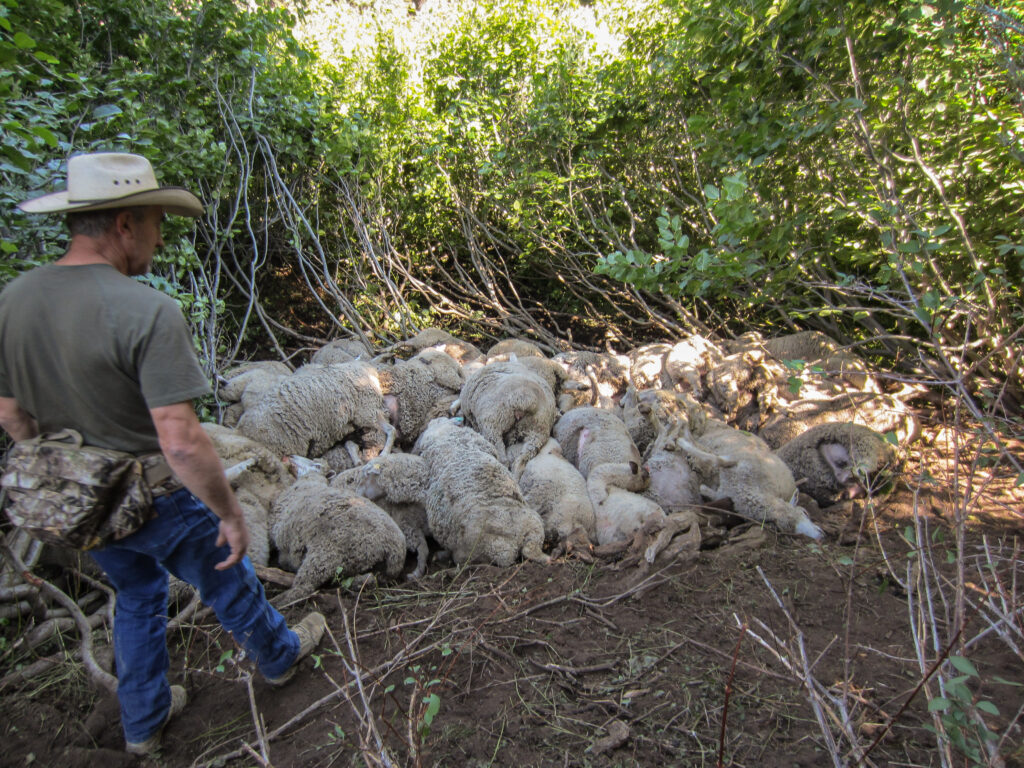 BOISE – (June 2, 2022) – Two adult wolves trying to attack a band of sheep grazing on the backside of Shaw Mountain caused a sheep pile-up in a steep gully, killing 143 ewes and lambs, state and federal officials confirmed this week.

The sheep were owned by Wilder sheep rancher Frank Shirts. In an interview with the Idaho Rangeland Resources Commission, Shirts said the wolf attack occurred during the daylight hours, a rarity. His sheep herders saw the two wolves running into the band of sheep and watched as the animals fell into the steep gully to their death, he said.

It’s the largest and worst incident of wolf predation that Shirts has experienced since gray wolves were imported from Canada and released into Central Idaho in 1995, he said. The sheep were among a band of about 2,500 ewes and lambs that crossed Idaho State Highway 55 in Eagle in mid-March and grazed through the Boise Foothills, following the green up to higher pastures.

“The wolves scared the hell out of them and pushed them into that little canyon and piled them in there,” Shirts said. “They didn’t consume anything. The sheep just suffocated in the pileup and died. We work to make things good for those sheep every day, so it’s a shame to lose them.”

Shirts said he would apply for compensation funds to cover the cost of the sheep predation.

Idaho Department of Fish and Game officials confirmed that they authorized Wildlife Services to take control action in the Boise River Wildlife Management Area (including Shaw Mountain) through the end of May. That order has expired.

“We know that wolves are present on the Boise Front,” said Brian Pearson, regional communication manager for the Idaho Department of Fish and Game. “This occurred in Game Management Unit #39, which is an area in which we have chronic livestock depredation events. To that end, we have expanded seasons and methods of take in Unit #39, and often have to address depredations using control actions.”

Two of Shirts’ sheep herders who stay with the sheep 24/7 managed to chase off the two wolves, officials said. Two Great Pyrenees guard dogs that were watching over the sheep herd ran for cover and were not injured, Shirts said. The herders and the guard dogs are two methods that Shirts uses to protect the sheep from predators.

USDA APHIS Wildlife Services sent a Wildlife Specialist to the site to confirm the kill, said Jared Hedelius, Idaho State Director. A helicopter surveyed the area the following day to look for wolves, he said. The Wildlife Specialist spent several days monitoring the situation, and the wolves did not seem to return to the area, Hedelius said.

Idaho Department of Fish and Game officials said they are unsure whether the wolves were dispersing from a pack or whether a wolf pack is operating in the Shaw Mountain area.

“We just felt that public needs to know these kinds of things are happening up there in the Boise Front,” said Emmett sheep rancher John Peterson, board president of the Idaho Wool Growers Association.

“This isn’t more than a few miles from Table Rock,” added Shirts.

The Idaho Wolf Depredation Control Board works cooperatively with IDFG and USDA APHIS Wildlife Services to address wolf/livestock conflicts where they are occurring on a chronic basis. The Board also works with IDFG and Wildlife Services to address unacceptable levels of gray wolf predation in elk management zones with predation management plans or where ungulate populations are below objectives.

The state of Idaho has the most wolves in the Rocky Mountain West, with a population of about 1,500 animals.