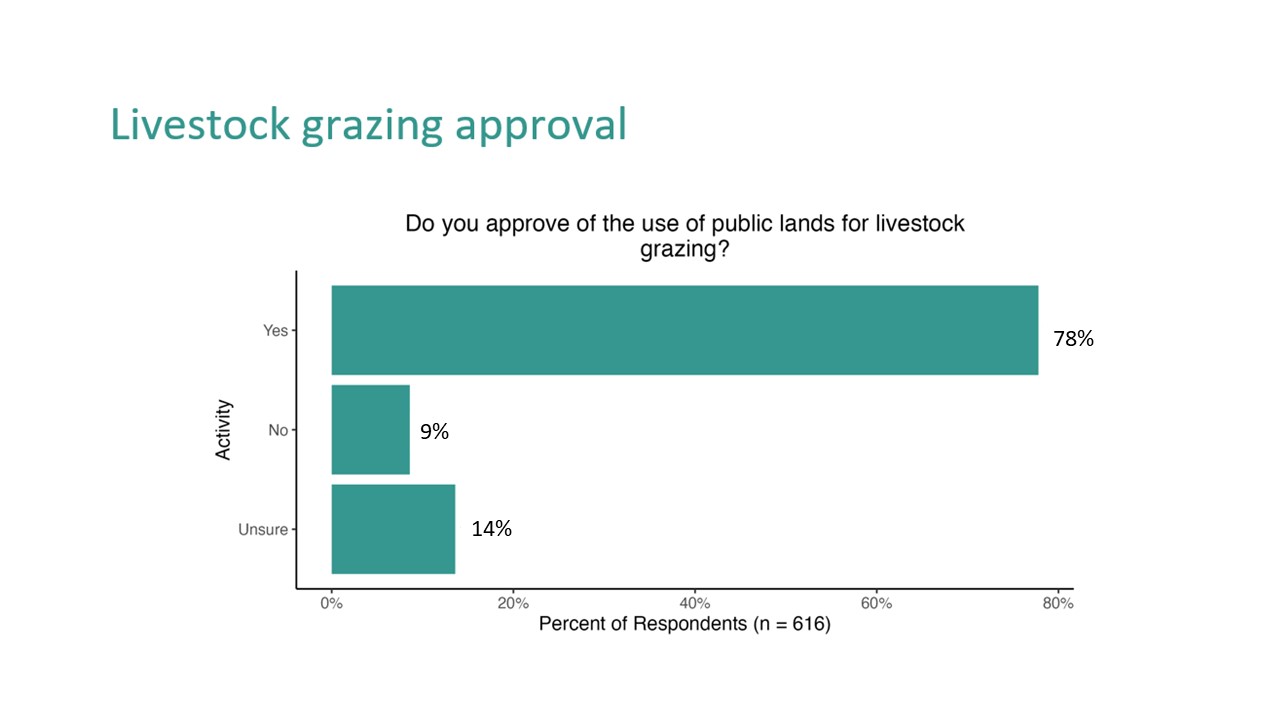 The poll also had a new recreation section showing greater concern about the impact of increased recreation use on public lands, and hinted at preferred solutions to deal with resource impacts and overcrowding.

A total of 1,048 residents responded to the survey, including 786 web-based responses and 262 phone-based responses. The survey showed representative views of both urban and rural residents, poll officials said.

See the full report on the IRRC Public Opinion Poll.

The initial survey data was compiled in October and November 2021. An additional question was re-surveyed in the summer of 2022, with 616 Idahoans responding.

The re-survey question was, “Do you approve of the use of public lands for livestock grazing?” Seventy-eight percent said yes, 9% said no, and 14% were unsure.

Upon learning about the wording change by the pollsters on this question, the IRRC Board of Directors asked them to re-survey the question so it was consistent with the question asked in previous polls. IRRC staff and board members thought perhaps people were responding to feedlots when asked about “livestock production.”

The re-survey increased the result to 78%, but that still raised questions, seeing that the “Don’t Know” answer went up significantly. Overall, survey respondents were overwhelmingly female (61%), compared to male (36%). In general, the number of “Don’t Know” or “Unsure” answers went up considerably compared to previous polls, indicating that IRRC has more work to do on the education front, which is our primary mission. The poll also found that males were certain about their answers, while females were more uncertain about various topics.

The most common ways survey respondents used sagebrush landscapes was by hiking (62%), camping (53%), and wildlife and bird watching (46%).

A majority of respondents (51%) stated that the condition of Idaho’s rangelands is “good” or “very good”.

In 2021, pollsters asked a new question about how various factors should be prioritized when making decisions about public rangelands.

“Reducing the risk of wildfire to communities” was ranked as a high priority by the highest percentage of respondents (70%), followed by “maintaining wildlife habitat” (66% high priority) and “preventing the spread of invasive species, such as cheatgrass” (60% high priority).

Respondents were split in considering “the economic well-being of local communities” as a high priority (44%) or a medium priority (42%).

“Recreational opportunities and access” received the lowest priority ranking overall, with 31% of respondents considering this a high priority and 47% a medium priority in decision-making about public rangelands.

Conclusion: The most important findings from this study indicate that Idahoans use and derive economic benefits from these landscapes in a multitude of ways, believe livestock grazing should be kept as part of public rangelands management, and view the maintenance of wildlife habitat and prevention of wildfires to be high priorities for Idaho’s rangelands. A majority of respondents believe that cattle and sheep producers manage rangelands in a responsible manner and that Idaho’s rangelands are in “fair” to “good” condition.

IRRC Board members and staff also assume that the large influx of new people moving into Idaho from out of state over the last 5 to 10 years may have led to an increase in “don’t know” responses.