DONNELLY, Idaho — (Jan. 7, 2011) — Ranchers have a saying that it often takes “a big snowstorm” to drive stray cattle back to the home ranch in the late fall when it’s time to round up cattle herds from public lands before the onset of winter.

But this year, winter came in with such a fury in November that one of the calves owned by the SS Cattle Co. in Cambridge got stranded by deep snow on top of West Mountain near No Business Saddle, west of Donnelly. The 9-month-old, 400-pound red angus calf was discovered — alive — by Greg Clovis when he was snowmobiling in the area with his son, Collin, on Dec. 27. They rescued it the next day. 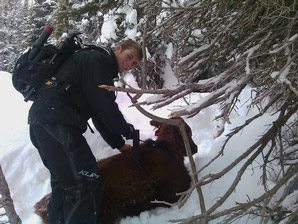 “At first, I thought it was either a cow or an elk. All I could see was its brown ear sticking out of the pine trees,” said Clovis of Boise, a member of the Donnelly Snowmobile Club. “Then I got closer and realized it was a cow.”

Collin Clovis managed to subdue the calf in a cluster of pine trees, tie a tow strap around its head, and read the ear tag to determine its owner. “It was quite humorous,” Greg Clovis said. “From a distance, you could hear Collin hollering at the calf like it was a 10-year-old kid. Finally, Collin wrestled the calf down and pinned it against a tree in the hole where the heifer had been sleeping. He tied the strap around the calf’s neck and got her calmed down enough to read the ear tag.”

They discovered the calf was owned by SS Cattle Co., and notified the Adams County Sheriff. The sheriff’s office notified ranch owner Royce Schwenkfelder, who called Clovis right away, and offered to help with the rescue. “We really appreciated how quickly they notified authorities because often we don’t hear about these situations until it’s too late,” Schwenkfelder said. “The calf is going to live because of their swift action.”

It’s very helpful for hunters and snowmobilers to report missing livestock in open range areas, he said. The best thing to do is to call the local sheriff’s office and report the identity of the animal. Ranchers do everything they can to find stray animals, but sometimes, they have been killed by predators, a cost of doing business on public lands. “Sometimes there’s just no way of knowing what happened,” Schwenkfelder said.

It was late afternoon when the Clovises discovered the calf, so they went down to their cabin in Donnelly, and made plans to rescue the calf the next day. They left the calf an apple to eat. “It had been surviving on tree bark and pine needles,” Greg Clovis said.

Clovis called his friend Ron Platt, another member of the Donnelly Snowmobile Club, who lives in Caldwell and has experience handling livestock. Schwenkfelder sent his ranch employee, John Devries, to assist with the rescue. Platt brought a rope and a sled that was large enough to carry the calf over more than 6 feet of snow.

Clovis said the rescue took several hours. Another 1.5 feet of snow had fallen overnight. They put the calf in the sled, wrapped it in canvas, and placed rope around the sled to make sure the calf stayed put during the topsy-turvy ride to No Business Saddle. But it all went smooth.

Devries said the calf was located in an area where they had gathered cattle by horseback multiple times in the late fall. For some reason, that animal got lost. Its mother came home with the rest of the herd a month before.

Interestingly, this was the third rescue that Clovis has been involved in on West Mountain. In 2006, he rescued a couple of skiers from Tamarack Resort who had skied out of bounds and were skiing the wrong way on Forest Road 186 toward Council. Last year, Clovis and his son ran into a young couple who got their snowmobiles stuck and had no emergency supplies. “They had no food or water or matches or anything,” he said. “They would have spent a miserable night out there on the mountain.”

Being involved in rescuing the calf was a novelty for everyone involved, Clovis said. “Everyone wanted to see the calf,” he said. “We ran into three other members from our club the day we brought it out because they rode up there just to see it. But we don’t mind helping out. It’s the right thing to do.”

Schwenkfelder said it would have been interesting to know what the calf went through in the 30+ plus days it had been separated from its mother with no food to eat. “That calf had stars in its eyes after it came home,” he said. “She had to be completely scared to death.”