Everyone loves dogs. But some dogs aren’t pets.

Idaho sheep ranchers use special dog breeds to protect their flocks from predators. These are livestock guardian dogs that have been bred to fend off coyotes, wolves, bears and mountain lions from killing sheep.

The dogs are a non-lethal method of protecting sheep – it’s a long-standing best practice used widely by sheep ranchers in Idaho and across the West.

World-wide, livestock guardian dogs have been used to ward off predators for over 2,000 years.

“Coyotes and wolves are the No. 1 cause of mortality in our herds,” explains John Noh, a Kimberly based sheep rancher. “The white dogs, Great Pyrenees, Akbash, they have shown, it’s been proven that they decrease predation that we have in our herds and keep our livestock safe.”

“Without the dogs, the coyotes would have a heyday with our sheep and drag off our livestock one by one, wolves, bears, lions,” said Cory Peavey, a sheep rancher with the Flat Top Sheep Company in Carey. “Livestock guard dogs and sheep have been going hand in hand for many, many generations. There’s good reason for that.” 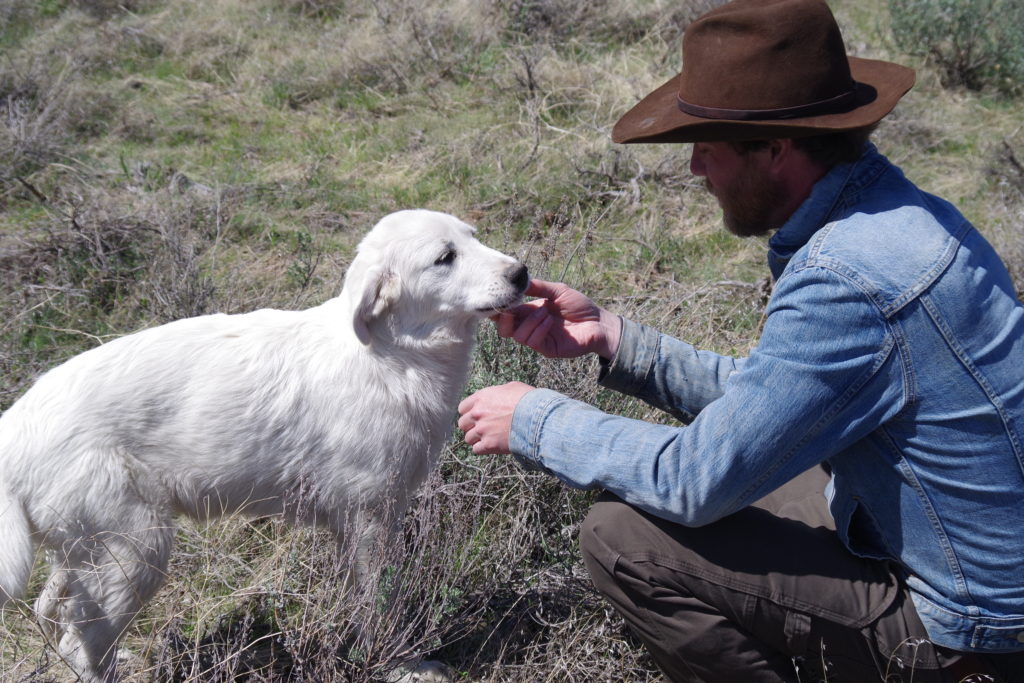 Cory Peavey of the Flat Top Sheep Company with a Great Pyrenees puppy in the Pioneer Mountains.

In the last year, a number of guard dogs were picked up by people on BLM or National Forest lands, thinking the dogs were pets that were lost or abandoned.

But in fact, the dogs were not lost. They were out in the field, protecting the sheep.

“We usually get a call or two about dogs wandering around in the forest, but this year, they were actually taken,” said Renee Kehler, a range specialist with the Sawtooth National Forest. “From what I understand, by the time we were able to get ahold of the livestock producers, the dogs were going to Montana.”

Some people have good intentions. They’re dog lovers and want to make sure the dogs are OK. But in the last year in Idaho, several guard dogs have been stolen, transported out of state, and presumably sold for cash.

Under Idaho law, it’s a felony to remove livestock guard dogs from the range. 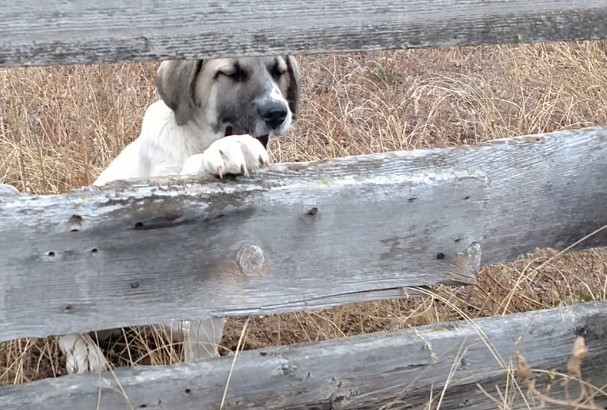 One of the Soulen guard dog puppies that was stolen last winter.

Last winter, a Washington man picked up three guard dog puppies at the Soulen Ranch near Emmett and took them home to Western Washington, some 450 miles away.

A neighbor tipped off Harry Soulen that he had the man’s name and phone number. Soulen called the man and asked him to return the dogs immediately. He refused.

When guard dogs are puppies, they’re released into the sheep herds to bond with the sheep. Any interruption in that routine could ruin the bonding and training.

Overall, sheep ranchers want people to know that guard dogs are out on the range for a specific purpose – to protect the sheep. They aren’t lost. Please leave them be.

The advice is similar to finding a deer fawn in the woods. Please leave it be.

“If the dog is not injured, I’d leave it alone,” says Joanna Djaden, a rangeland specialist for the BLM in the Shoshone Field Office. “More often than not, they know where the band is. These dogs have an amazing sense of direction. They can smell and hear a lot more than humans can. It’s pretty amazing. They know exactly where they’re at in this country, this is not their first rodeo.”

In 2020, with the Covid-19 pandemic, a sharp increase in outdoor recreation occurred.  Many of them were newbies.

“People don’t understand because they haven’t been in the woods that much,” Noh says. “This year with the pandemic, we’ve seen more people in the South Hills where our sheep are than we’ve ever seen before. With a little education, if sheep producers can put a collar and a nameplate on the dogs, then it will alleviate a lot of these problems.” 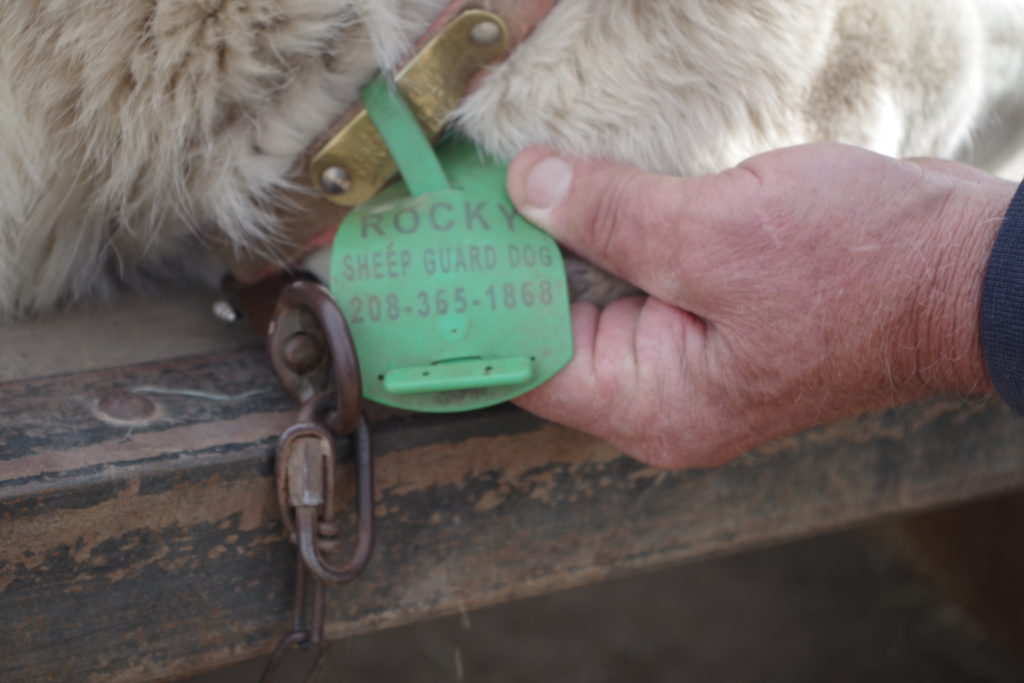 Guard dog collars typically include the name of the dog and a phone number to call.

“For me, I’d appreciate a phone call over taking my dog,” Peavey says. “Because then I might have to go 2.5 hours out of my way to acquire the dog, and then return it back to where he was going in the first place.”

“It’s like a cow tag, but it says I am a sheep guard dog, what his name is, and then a phone number. You’re hoping when people see that, they know that he’s where he’s supposed to be,” Peterson says.

An increasing number of guard dogs are getting picked up by mistake in the Wood River Valley and the Sun Valley area, a region with high tourism traffic.

Last summer, Peavey read on Facebook that someone had picked up his guard dog puppies at a corral on private land, thinking they had been abandoned. In fact, Peavey had left them there on purpose while he want grocery shopping in Hailey.

“By the time, I was heading back, I saw a post on Facebook about this rancher who had abandoned his puppies,” Peavey says. “And that they were starving and didn’t have any water. And that nobody was there to look after them. It was a complete, extreme portrayal of what the situation actually was.”

Peavey connected with the people via social media and got his dogs back. “It can get out of hand pretty quick,” he says.

A quick phone call can avoid a situation where guard dogs are taken away and exposed to a domestic situation that could damage years of training, Peavey says. 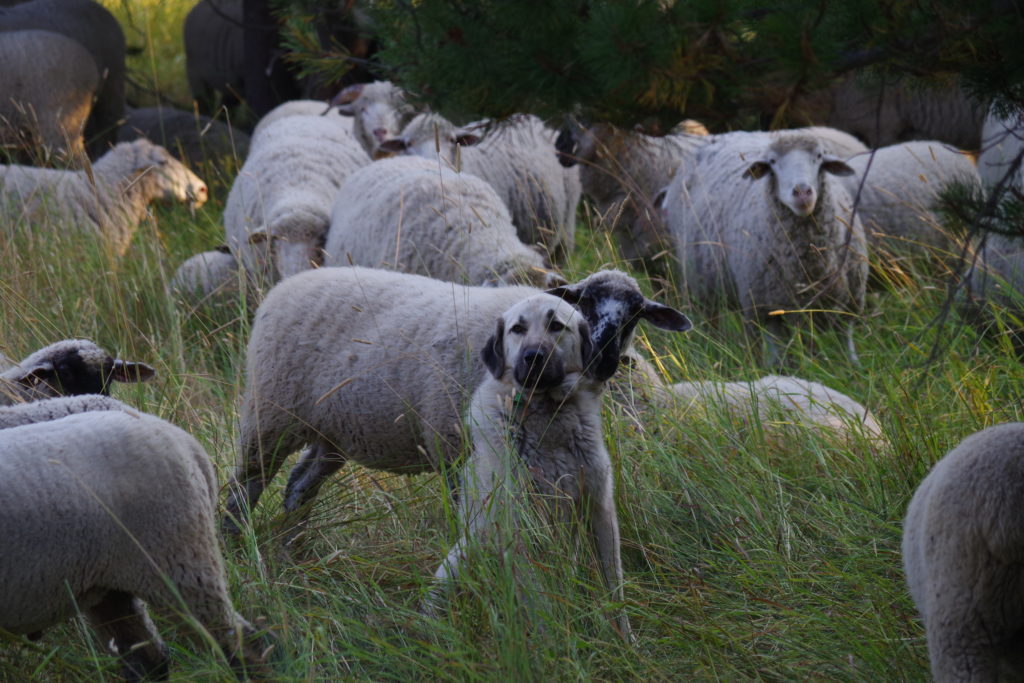 Sheep ranchers say they’d much rather get a phone call if people have questions about whether a guard dog is lost or has been “abandoned” … a quick call saves time and money.

“You shouldn’t be taking the dog out of its environment, bringing it home, causing undue stress, and exposing it to unnecessary domestication and kind of reversing my process.”

“If you see a lean and healthy guard dog, even 4 miles from where the sheep are, they should leave it be … because it may be in the process of just catching up with the herd,” Djaden says. “They do know their way.”

Some of the most common breeds used in Idaho include Great Pyrenees, Akbash and Anatolian Shepherds.

Ranchers invest a lot of time into training the dogs. There’s a fine art to training them so they bond with the sheep, but also obey their human handlers, ranchers say.

“You don’t just stick a dog with a band of sheep,” explains John Peterson. “We’ve had good luck putting the pups with lambs. The dogs imprint with the sheep. You don’t want to handle them a whole lot at that time in their lives.”

“I grew up out here on the ranch, grew up with the dogs, like any young boy, fascinated with the puppies, just always been close to the dogs on the ranch,” Peavey says. “But if I got caught petting a puppy in the corral, I’d get harped on by the sheep foreman or my grandfather, don’t touch those dogs, they’ll love people more than they’ll love sheep and they won’t do their job. But of course I’d still pet them when they weren’t looking.”

“I learned I could make friends with some of these dogs, they can learn to appreciate people, and do their job just fine. The trouble is, if these dogs don’t receive any affection from people at a young age, and periodically throughout their lives, then they grow up wild, they grow up feral, and when you need to catch a dog, especially when it’s wounded or needs medical attention, you can’t! It’s next to impossible.”

There’s also a fine line in training when it comes to a guard dog’s temperament around outdoor recreationists, Peterson says.

Typically, the guard dogs will be raised to about one year old before they join the sheep on the range. Prior to going into the field, the dogs  get wormed and vaccinated by a veterinarian.

It’s imperative to get the dogs neutered or spayed to ensure they don’t get side-tracked on the range, trying to find a female dog in heat.

In the spring, when it’s time for the sheep to follow the green-up into the mountains, the guard dogs are bonded with the sheep and the sheep herders, and they’re ready to do their job. 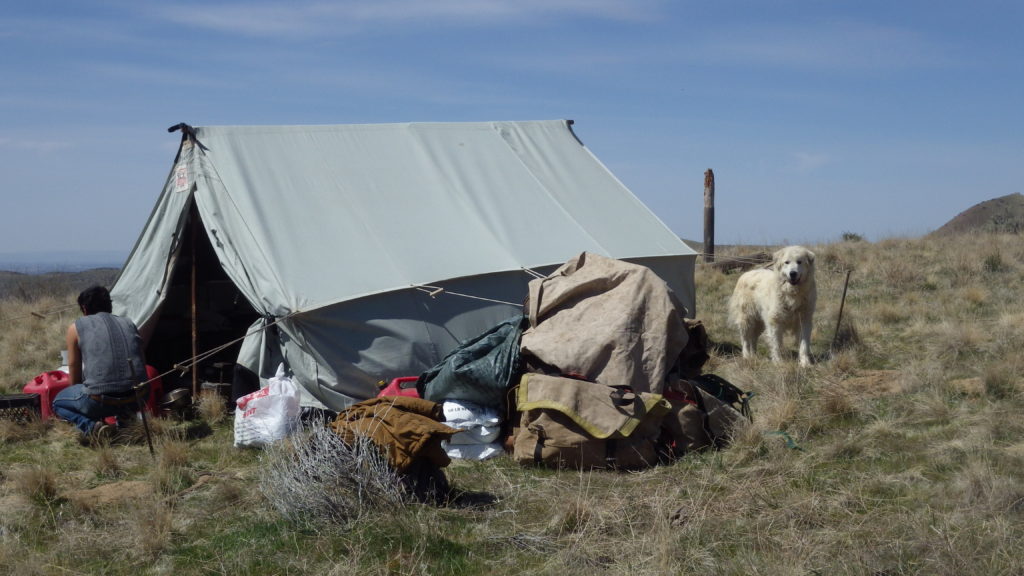 Great Pyrenees by a sheep camp in the Boise Foothills.

Sheep ranchers typically use at least two guard dogs for each band of sheep, and sometimes more.

In the field, guard dogs fend off predators in several ways:

Confronting a predator directly. Sometimes more than one guard dog will approach a threat and work together.

It’s great when all of the training and care leads to a good set of guard dogs that work together to protect the sheep, Peterson says.

“Last year, we had the best group of dogs we ever had,” Peterson says. “We had wolves all around us on our summer range, and we had no confirmed kills.”

That’s the ideal situation. Some years, however, predator kills can be bad, and even the guard dogs can get mauled or killed by wolves.

“Last year, I lost one guard dog, and another night, we had one that got tore up really bad. Had to take her to a vet. That really pulled at my heart strings, wow, these dogs are willing to give their lives to protecting these sheep,” said Tom Peavey, Cory’s dad.

Idaho range sheep operations cover huge swaths of country from spring to summer range. The dogs hike hundreds of miles with the sheep, guard them and sleep with them 24/7.

Often times, they can hear coyotes or wolves howl in the dark of night.

In late August, early September, when lambs are shipped to the market, the guard dogs hang out nearby. They lie quietly in the frosty meadow while the lambs get loaded on stock trucks.

In the coming days, it’s time to start the long journey back home with the ewes.

This is a time when guard dogs can get temporarily separated from the sheep. In a place like the Wood River Valley, ranchers trail the sheep through a number of subdivisions on their way to Muldoon Canyon and the Flat Top Ranch.

“The dogs have to leap-frog larger areas of civilization before they can get where the sheep need to go,” Cory Peavey says. “The problem occurs when we’re coming home. We have to cover vast distances, we have to go through subdivisions, alongside towns, the dogs get distracted … “ 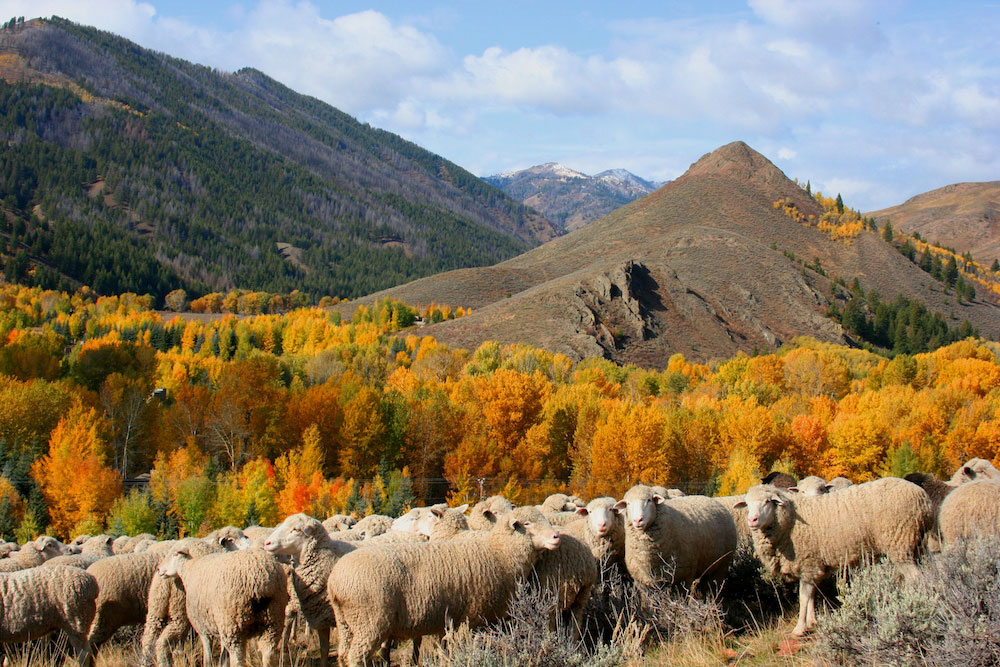 Sometimes guard dogs and sheep can get separated when sheep ranchers trail sheep through subdivisions in the Wood River Valley. (LOTR file photo)

“I’ve established relationships with as many people as I possibly can in the Wood River Valley so that when I’m looking for a dog, I can learn about it from word of mouth. Then it’s really easy to load ‘em up and take ‘em home.”

If people see a dog that may have been separated from the sheep herd, check for a number on the dog’s collar to call.

Or, contact the nearest BLM or Forest Service office. But please! Leave the dog in the field.

“The Shoshone District has 36 bands of sheep they’re tracking, from the Snake River to Galena Summit, we track them every day. We know where they’re at. Contact us,” Tjaden says.