The Bureau of Land Management is increasingly moving toward the use of large fire breaks in strategic areas to help control range fires in Idaho and the Great Basin.

Fire breaks are often created next to existing roads to provide an anchor point for slowing down or stopping fires. The idea is to keep range fires smaller to preserve native sage-steppe habitat. 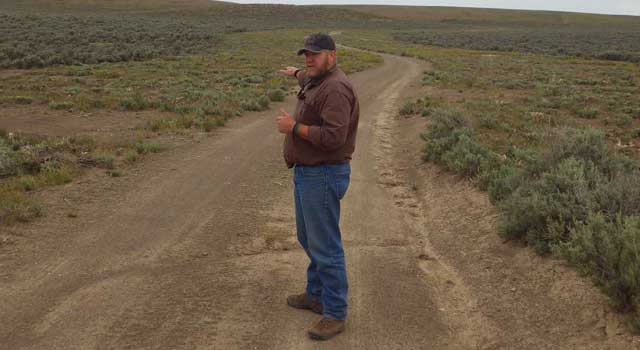 Lance Okeson of the BLM Boise District shows a typical fire break using a large mower to trim vegetation on both sides of a BLM dirt road, south of Bruneau. The concept is to reduce the height of the vegetation so fire crews can control fires in fire break areas and prevent blazes from growing into large-scale disasters.

In recent years, the trend has been growing toward large, destructive range fires in Southern Idaho. In low-precipitation areas of the Snake River Plain, range fires are growing in size, and in some cases, they’ve burned the same ground repeatedly over time. When that occurs, native shrub-steppe habitat gets destroyed, and cheat- grass and invasive weeds take over.

That’s why the BLM is working on creating more fire breaks and anchor points to stop range fires dead in their tracks. “As fires move into these fuel breaks, they not only break apart but the flame length gets reduced quite a bit,” says Lance Okeson, assistant fire management officer for the BLM Boise District. “The land management agencies control over it is the fuel.” 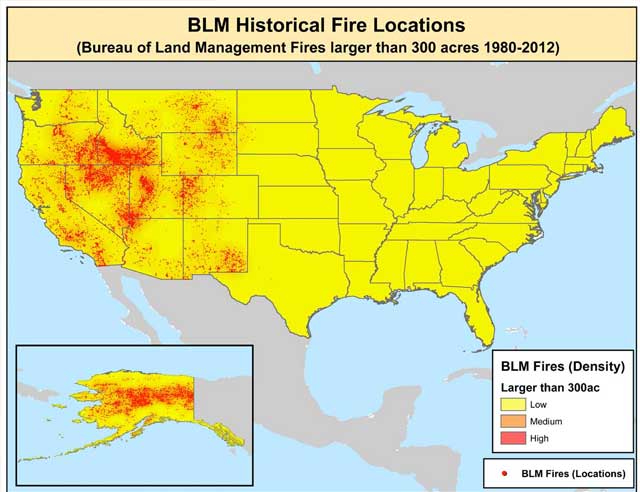 The BLM is trying to reverse the trend of huge range fires that are destrying native shrub-steppe habitat in the Great Basin.

Fire breaks can be made by mowing vegetation next to dirt roads, planting green strips with hardy perennials, and using targeted grazing with livestock.

“Targeted grazing is a fairly new concept,” says Karen Launchbaugh, professor of rangeland ecology and Director of the Rangeland Center at the University of Idaho. “A lot of work has been done with sheep and goats to manage invasive plants. Now we’re seeing more use by cattle be- cause cattle eat grass, and grass is the fuel we’re concerned about with wildfires.” 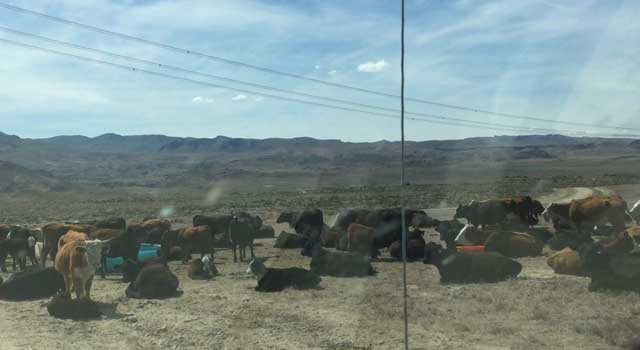 Rancher Daniel Richards used water troughs, protein supplements (orange buckets), salt and temporary fencing to keep the cattle focused on 200 feet either side of a dirt road to create the fire break. They kept the cattle on the move to create fire breaks along both sides of the road for a distance of one mile.

As the BLM works on range rehabilitation in the Soda fire area in the Owyhee Mountains, they used targeted grazing to reduce the fuels – highly flammable cheatgrass – on about 300 acres near Hemingway Butte.

To keep the cattle focused on the project area, the BLM and grazing permittee used temporary fencing, protein supplements, salt and water.

“It worked extremely well. I was very pleased with the results,” said Daniel Richards, the rancher who provided 130 cattle for the targeted grazing project.

The BLM carefully monitored the project on a daily basis to make sure the objectives were being met.

Long term, the BLM hopes to set up a major fuel break along a powerline road in the Owyhee Front to help pre- vent the land from burning up. Cheatgrass, an invasive weed that’s highly flammable in the summer, dominates the front range in low-elevation sites. 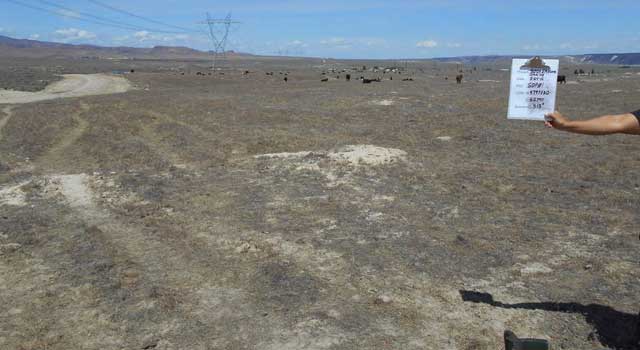 The BLM carefully monitoring the targeted grazing project on a daily basis to track the results.

The agency is currently working on an environmental analysis to gain approval for the fuel break.

Daniel Richards ranches in the Owyhee Mountains with his wife, Bailey. He thinks that more targeted grazing with cattle would work well for the powerline fire break corridor.

“Goats and sheep are extremely good at taking care of weeds,” he said. “In Owyhee County, there’s an awful lot of cheatgrass in the Owyhee Front, and you’d have to have a massive amount of goats, and they still wouldn’t do that good of a job. But we do have a lot of cows in Owyhee County. And it’s an extremely useful tool that we haven’t been utilizing. Hopefully, we can keep it going.”

Goats are being rented by counties, cities and other entities to control noxious weeds and create fire breaks next to subdivisions. These goats are working on leafy spurge, a noxious weed, next to the Weiser River.

Professor Launchbaugh has been doing research on cattle grazing as a targeted grazing tool in Owyhee County for a number of years. “What my research looked at is, can we slow the fire, reduce the flame length? And even at moderate levels of grazing, we were able to accomplish that,” she said.

As the BLM continues to create more fire breaks, Launchbaugh sees merit in all kinds of treatments.

“Well there are several ways to create fire breaks. Right behind us here, you can see an area that was mowed,” she says. “Bringing the herbaceous material down to the ground. So that’s one tool Roads, trails, those are brown areas that can be effective. Slowing the fire as it comes across grazed area … I think the key is to combine all of these tools. There’s no one right tool, but all of these are good in different places. I think grazing is important as part of the mix.”

Cattle could be effective in “mowing” fire breaks in areas where cheatgrass or other types of grass are the target species since they are grass-eaters, experts say.

How to compensate ranchers for targeted grazing projects has yet to be determined. Richards felt it would be valuable to participate in the experimental project in the Soda Creek fire zone, and see how things worked. “It’s still in the experimental stage,” he said. “I’m experimenting with it, and so is the BLM.”