Big wildfires are burning up crucial wildlife habitat in Idaho and the Great Basin.

“Back when I got here in 1981, a big fire was 100,000 acres,” says Mike Pellant, a recently retired rangeland ecologist for the Bureau of Land Management. “Fast forward to 2007, the Murphy complex fire, from Twin Falls to Nevada, 650,000 acres. Then, two fires in Oregon, total fire footprint 1 million acres. So what we’re seeing is these mega fires, these huge landscape-scale fires.” 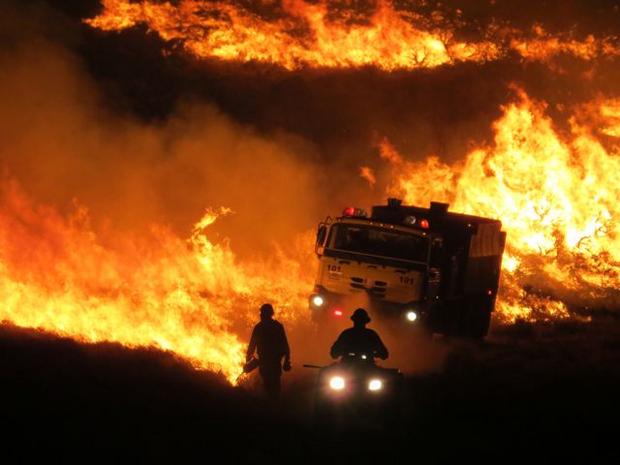 The Holloway Fire in Oregon and Nevada (2012)

The big wildfires are burning up some of the best wildlife habitat that’s left in the Great Basin – primo sage-steppe habitat for sage grouse and many other wildlife species such as songbirds, pronghorn and mule deer.

To give firefighters a better chance to stop wildfires when they’re small, the Bureau of Land Management is working to create a series of strategically located fire breaks. Grass, weeds and shrubs are the “fuel” for wildfires on rangeland. 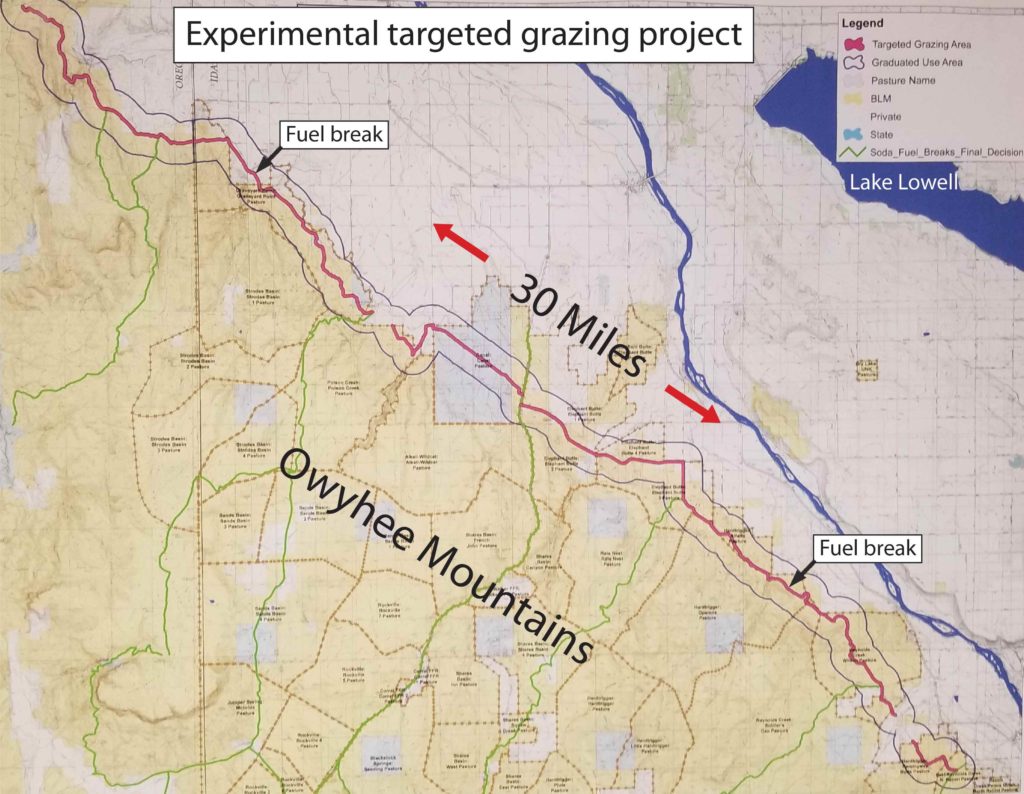 The objective is for the cattle to mow cheatgrass down to a 2-3 inch stubble height for 30 miles across the Owyhee Front by June 30.

At the foot of the Owyhee Mountains, the BLM is partnering with six ranchers to create fire breaks with targeted livestock grazing.

The objective is to use livestock to reduce highly flammable cheatgrass vegetation in the spring when it’s green and palatable to eat. The goal is to create a fire break 200 feet wide on either side of a road that runs for 30 miles along the front side of the Owyhee Mountains.

“The goal is to reduce vegetation there to give firefighters a safe place to operate,” says Ben Sitz, BLM field program manager. “And hopefully stop any fires. We’re using cows to try to get to that end point.”

“Fuels management is a large part of the solution,” adds Pellant. “But the only ubiquitous fuel managers on this land are the livestock that graze it. So the challenge is, can we marshal the livestock into strategically doing fuel work that’s going to be a huge impact with the fires that we’re having occurring out here now. I think there’s a lot of promise.”

In the Owyhee Front, the objective is for the cattle to graze cheatgrass and grasslands down to a 2-3 inch standard by June 30. 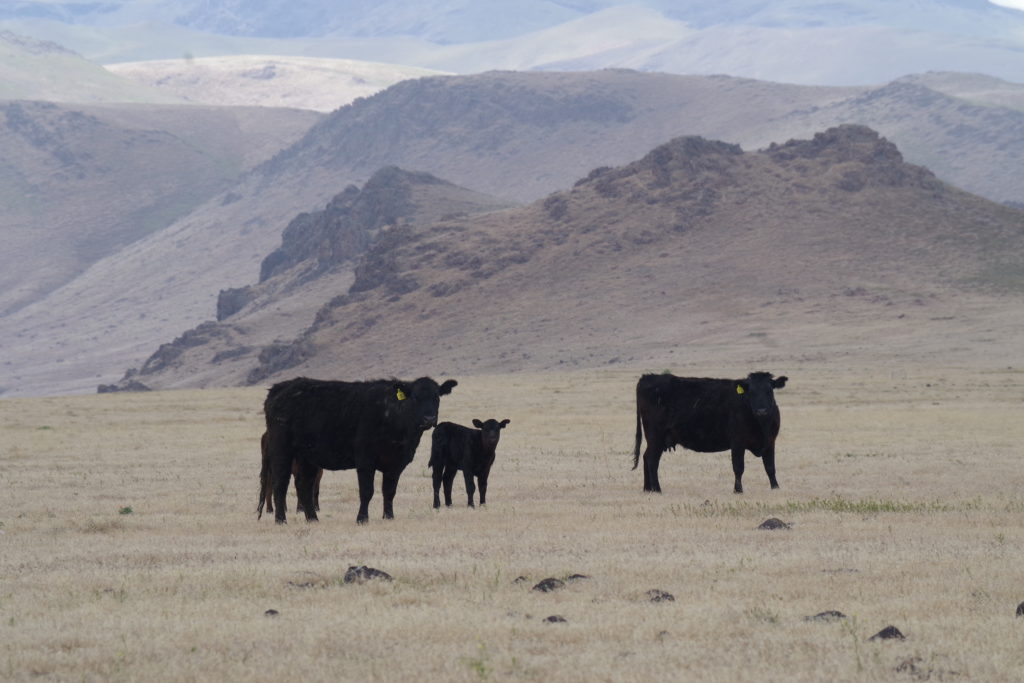 Angus cattle grazing on cheatgrass near the Wilson Creek recreation trailheads in the Owyhee Front in late May.

By the end of the spring season in 2020, the cattle were hitting that standard to create fire breaks and safe zones for firefighters. A continuous carpet of short cheatgrass, “mowed” by cattle, could be seen at the base of the  Owyhee Front.

“It’s going really well this year. This is the third year of full implementation,” says Lance Okeson, Assistant Fire Management Officer for the BLM Boise District. “I think we’ve reached our objectives in a big portion of that fuel break.”

“Yeah, I think it’s good program to keep going,” says Daniel Richards, who runs an Owyhee County ranch with his wife, Bailey. “We’re still in the experimental stage, kinda new to everybody. But I think it’s going in a good direction.

“We just had the Soda fire not too long ago. That kind of fire is not very good for anybody, anything you can do to slow those catastrophic fires down and helps the firefighters out, that’s good in my book.”

“We’ve learned a lot,” adds Owyhee County rancher Ted Blackstock. “We’ve tried different classes of cattle to see what would work the best, trying to hold cattle in certain areas has been kind of tough, have to ride every day and keep water where you want them.”

Rancher Ted Blackstock uses an active cattle-herding approach to mow down the cheatgrass … Here, his herder, Howard, keeps the cattle focused on areas 200 feet on either side of the main road.

Under the BLM targeted grazing program, the ranchers bear the cost of herding, water-hauling and managing livestock to create the fire breaks, and the BLM provides the public range at no cost as an incentive for ranchers to participate. The alternatives are mechanical mowing, blading, seeding or spraying herbicides to control vegetation – all of which cost taxpayers more money.

Ranchers say the benefits outweigh the costs so far.

Richards says his cattle have shown good weight gains, even on dry cheatgrass. “Yes, they’re doing pretty good. Even the year that we did it in May on dry feed, the cattle did very well on it,” he says.

Pellant is working together with Pat Clark, a rangeland scientist and research team leader for the USDA Agricultural Research Service, on a multi-regional research study to see how experimental targeted grazing projects are working in Idaho, Arco, Nev., Lakeview, Ore., and other forthcoming sites. 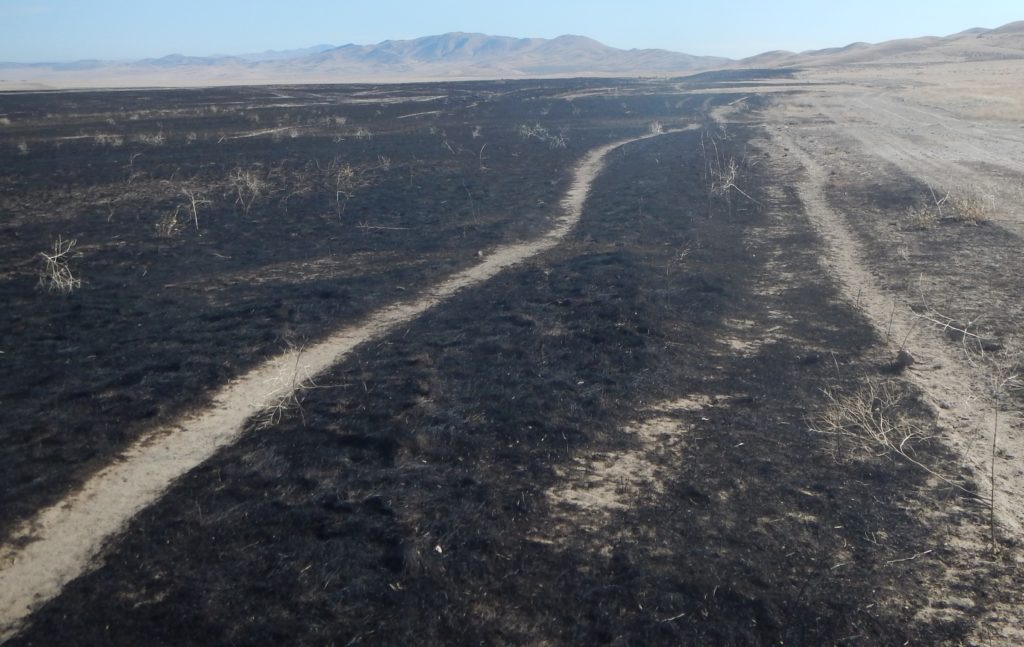 The research is tracking how much fuel is reduced by targeted grazing, changes in plant composition in targeted grazing areas, and what methods seem to work best to keep cattle focused on fire break areas next to existing roads.

In the second year of the study in Elko, the grazed firebreak helped snuff out a grass fire. The Boulder Creek fire started on a Monday, and it was 100 percent contained at 1,030 acres in 48 hours.

The research site, west of Elko, is tracking the effectiveness of targeted grazing in a 21-mile-long pasture. The pasture is fenced on both sides of the fire break.

It’s been grazed by up to 2,400 cow-calf pairs from March – May. Stocking rates have varied. Using permanent fence to focus cattle on fire break areas is highly effective, but expensive.

“The first year we did it with fencing. That was later in May, and the whole thing was dry. Still got good results, but you have to put a fence in to keep them there.”

Since then, Richards has used herding, water, minerals, salt and protein supplements to keep his cattle focused on the firebreak area. 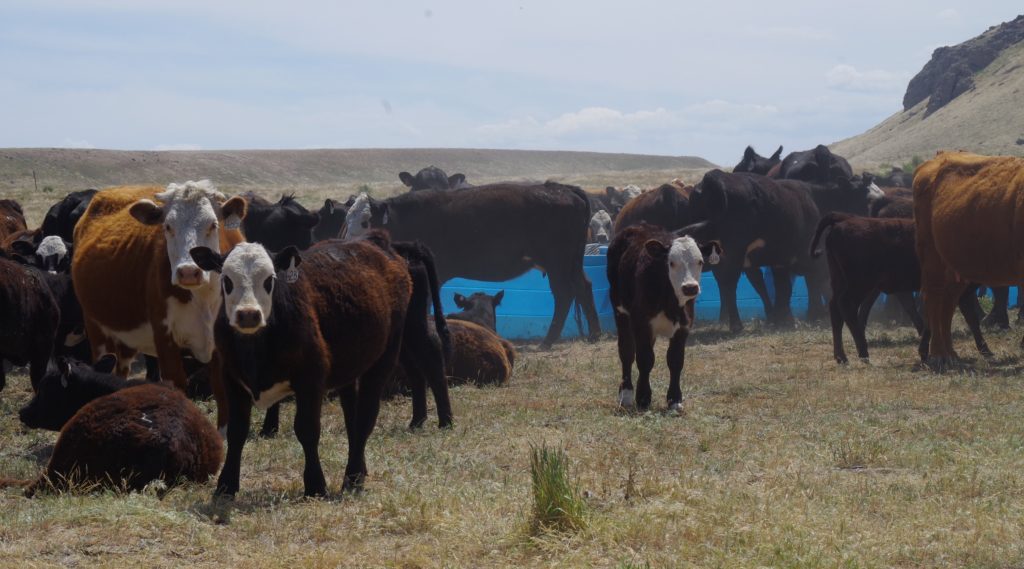 Nearly all of the ranchers used strategically placed water troughs to keep the cattle focused on the 200-foot fire break areas next to the road.

“We’re trying to keep the cows right here as much as possible without having to put in miles and miles of fence,” he says. “And cows do what cows do. When it’s cool, they tend to fan out and spread out, they have their favorite spots in this allotment that they’ve had for years. So it’s trying to train my cows to stay here during a certain time. It can be tricky. Very labor-intensive.”

Overall, the grazing management side of the project is challenging because ranchers raise their cattle to spread out and disperse on the range.

“Before we started doing this, we tried to train our cows to spread out throughout the allotment, so we’re not hammering on one spot vs. another spot. Now we’re trying to train them the other way,” Richards says.

“Well, yeah, to hold them in an area, that’s the tough part,” Blackstock adds. “Keep them focused on eating the grass along the road.”

Blackstock uses a range rider to keep his cows focused on the firebreak areas.

“I’ve been really lucky to have Howard. He’s been really good about taking on this project. He really enjoys riding his horses, and it works really good for us,” he says.

The ranchers do like being able to graze livestock on the cheatgrass when it’s ripe and palatable, starting about March 1.

The BLM is planning on using a variety of techniques to create firebreaks next to existing road systems in the Great Basin to help stop range fires from becoming “mega” fires. Targeted grazing will be one way to create and maintain the fire breaks.

“This year, things are working a lot better,” says Jason Miller, who runs an Owyhee County ranch with his father, Tim. “We got to come out here quite a bit earlier. We got the cows on the cheatgrass while it was nice and green. They were happy. We kept them where they were happy with the water … and the salt and minerals. That’s been key.”

“We have one operator who’s using herding, he’s got cowboys out there every day, and he’s moving the animals where they need to be,” he says. “Others are using the supplements and the water, and we’ve got another one that’s using temporary electric fencing.”

At a bigger-scale, the BLM is rolling out ambitious plans to create about 990 miles of fire breaks along existing roads on 3.6 million acres of public lands under the Tri-State Fuel Breaks project in Idaho, Nevada and Oregon.

The BLM plans to use a mix of mowing, seeding and blading to create hundreds of miles of fire breaks per year. Targeted grazing will be used as one method of maintaining those fire breaks.

“You’re trying to modify fuels, and then that modifies your fire behavior right?” he says. “As the fire burns into one of these fire break areas, let’s take the targeted grazing area, the flame lengths will be reduced, and the rate of spread is going to go way down, and that’s going to make your fire community more successful on that fire break.” 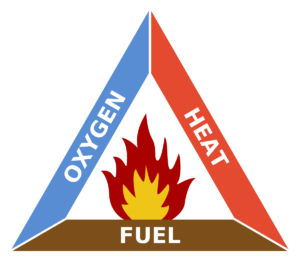 Wildfires need all three legs of the fire triangle to survive. Reducing fuels is the one thing that land managers can control.

Okeson reminds us about the fire triangle – oxygen, heat and fuel.

“You take any one of those legs away, it can’t burn right? So the land management agency’s control over it, is the fuel.”

Lessons learned from the targeted grazing project in the Owyhee Front, plus findings from the ARS research project on targeted grazing, will provide guidance on how best to create fire breaks in the future, Okeson says.

“Can we do this at a landscale level, can we graze on an annual basis in a strategic manner, and reach our objectives? So far we’re showing good results. “I’m really excited. I really like the project.”

“Everybody’s been bouncing off ideas about what’s working and what’s not working, I think we’re kind of coming along with it,” Richards says. “For a fuel break, yes, it makes a lot of sense to me.”

Steve Stuebner is the writer and producer of Life on the Range, an educational project sponsored by the Idaho Rangeland Resources Commission.