Royce and Pam Schwenkfelder run the SS Cattle Company with Royce’s brother, Bob, and his wife, Bonnie, in the Little Weiser River Valley near Cambridge, Idaho. The broad valley is framed by snow-streaked mountain peaks, and from their back porch, they can see the whole panorama of the mountains, the valley, and their ranch.

“We’ve been coming up here for quite a few years on horseback or 4-wheelers or whatever, since we got married, and this has kind of always been our spot,” says Pam Schwenkfelder. “We’ve always looked out over the country, and thought that if we could ever build a house someday, this is where we’d build it.”

Says Royce Schwenkfelder, “It gives you good perspective. It’s beautiful country. You get to look out at the crops and the cattle, and it’s just a pretty place to be on earth. We love it.”

Royce and Bob are the fourth generation of the Schwenkfelder family to work the family ranch in the Little Weiser River Valley, near Cambridge.  Their grandfather from Switzerland homesteaded the place in 1889. They’ve expanded the ranch to 850 acres of irrigated base property, approximately 4,000 acres of rangeland and private lease ground. During the summer, they raise hay and other crops on the base property and graze cattle on about 130,000 acres of land in the Payette National Forest, on West Mountain and Indian Mountain near Indian Valley.

The Schwenkfelders’ base property is in the Little Weiser River Valley near Cambridge, Idaho.

Royce and Pam planned on different careers. He was working on a marketing degree from Boise State University and Pam was in the nursing program, but after spending a summer on the family ranch and much deliberation, they decided to go back to the ranch instead. “We both left our degrees on the table to come back and do this,” Royce said, smiling. “It was an opportunity that we didn’t understand the true significance of at the time. Now, later in life, when we understand our kid’s appreciation of growing up here and how ranching shaped them, it really hits home as an even more positive thing.”

An overarching theme at the Schwenkfelder Ranch is sustainability. They raise Red Angus cattle; a breed they feel is best-suited to the climate and capacity of their land. The cattle co-exist with a wide variety of wildlife, including mule deer, waterfowl, sage grouse, a candidate species, and Rocky Mountain wolves.

The Schwenkfelders pay close attention to the water quality in the Little Weiser River, a stream that contains bull trout in its headwaters, a threatened species. All of this diverse wildlife and the issues associated with them provide interesting “wrinkles” and challenges to the management of the ranch, Royce says.

“It’s been a great place to raise kids. They get out and get their hands dirty and understand where their food comes from,” he says. “They learn how to ride a horse. They appreciate some of the basics in life. There’s a lot of value in what you do in life and things you hold sacred that you learn from a piece of dirt.” 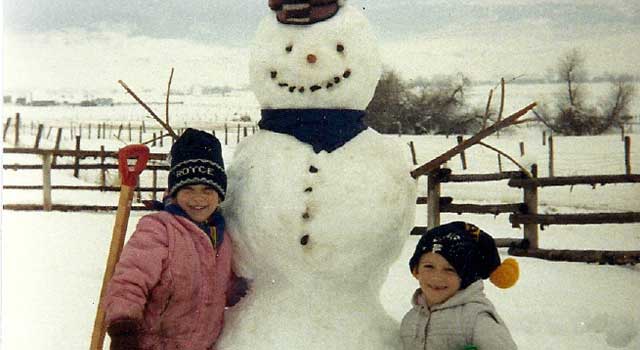 Cody, left, and Kayla as youngsters.

The Schwenkfelders raised two daughters on the ranch, Kayla and Cody.  Cody, their oldest daughter, worked on the ranch through high school, and graduated from the University of Idaho. She’s married now and has a son of her own, named Wyatt. “She’s done a great job of introducing him to ranch life and all the outdoor activities from calving cows in the spring to feeding the horses with “Grandma Pam” every day,” Schwenkfelder says.

Kayla, who lives in Genesee now with her husband, left her mark on the ranch with a wildlife-enhancement project that earned a national award from the FFA.  A pair of sandhill cranes flushed from near a pond when we approached.

“This was a piece of ground that didn’t have a high value from an agricultural perspective.  It was pretty rocky. So we hired a construction outfit to build a pond and then Kayla designed where the wildlife enhancements could be,” Schwenkfelder says.

“Being in FFA wasn’t just about having cows for her (Kayla). It was about finding a balance on the ranch between wildlife and cattle. So that started the ball rolling and we try to continue that effort.”

Kayla and her FFA partners used to plant 600 to 800 trees a year on the ranch. They looked for areas to set up wildlife ponds — areas that weren’t actively being used by the ranch, and designed the ponds, allowing waterfowl and wildlife to move in. They fenced off some of the ponds to protect the trees and new wetlands and leave the areas for the wildlife.

Schwenkfelder enjoys seeing the wildlife that Kayla’s project has brought to the ranch.  He motions to snow geese flying overhead that he saw swimming in the wildlife pond earlier in the day. “We never used to see snow geese like we see them now,” he says. “If you have the privilege of running a ranch, it’s your responsibility to make it better.” 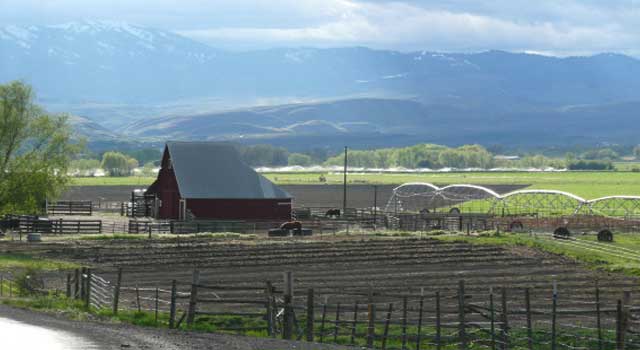 The SS Cattle Co. barn and corrals, with Sturgill Peak in the background.

Schwenkfelder picked up a strong land ethic from his father.  “My dad was always one of those guys who took good care of the ground he worked with. He was always really conscientious of the cattle and the land. So it was always instilled in us kids that the land here was pretty sacred,” Schwenkfelder says.

The Schwenkfelders switched to Red Angus cattle in the late 1980s after running Simmental cattle in the 1970s and Herefords for decades before that.

“We’ve transformed our whole business to red cattle now, and we love it,” he says. “I wish I’d started there 20 years ago.”

Red Angus fit the environment in the Little Weiser Valley and on West Mountain better than the other breeds they worked with. “You have to adapt the cattle to the environment, not the other way around,” he says. “In every end of the country, from Florida to northern Canada, there’s a cow that will blend in with a different environment. So we had to find an animal — and a style of animal — that would fit here. Safe, healthy beef from a well-balanced management style of the ranch is our goal.” 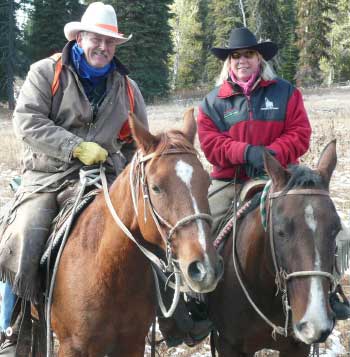 Royce and Pam Schwenkfelder up on West Mountain.

Schwenkfelder is proud of the things his family has done to improve their deeded ground and the public range on West Mountain. He and Pam will continue to do that as long as they run the ranch. “There are a lot of things that we do on that ground that is a stewardship type of thing,” he said. “Because we want it to be good next year and beyond, we want to do it right. This range is a renewable resource, and with proper balanced management, we can be sustainable.”