Kids, families learn all about wool, lamb and herding at Sheep in the Foothills event 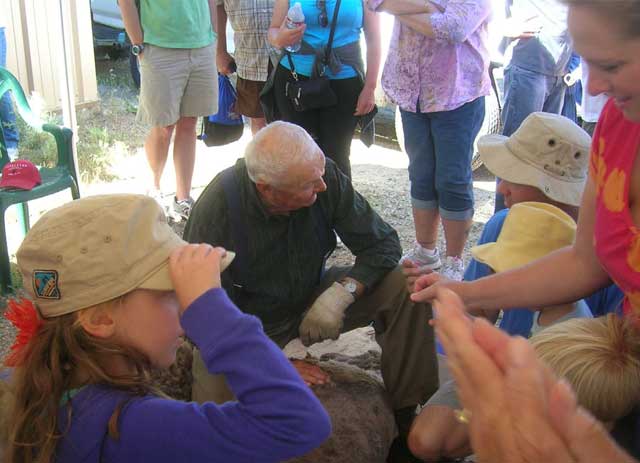 Duane Gallinger takes a break from shearing to talk about his trade.

“There’s a lot of people here, and they’re enjoying themselves,” observes John Noh, a Kimberly sheep rancher who doubled as a BBQ cook for the day. “I hear the sheep dog work down there is fabulous. I think this is wonderful. All of these people interested in sheep and agriculture.  One little boy just ran by saying, “Where are the sheep! Where are the sheep!” 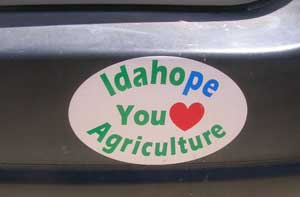 The event featured vendors, live music, sheep-shearing and sheep-herding demonstrations, and a delicious lamb lunch. The kids seemed to be enjoying themselves. There were lots of opportunities for hands-on learning.

“The sheep are funny,” a boy in a cowboy hat said. “They’re cutting the fur off, so they don’t get hot.”

The kids liked the food too. A group of young kids were sitting around on some rocks, eating snacks.  What do you like about the event today? “Ice cream!” said Challis Halloway.

A young girl, Koberg Koberg added, “I think the sheep are really cool.”

“Yeah, I think it’s been a cool event,” said her dad, Scott Koberg. “Lots of kids showing up, really cool demonstrations and stuff, and it’s a beautiful day out here. Everyone’s learning about sheep.”

Part of the purpose of the event is for Boise residents to learn more about the sheep that they may see passing through the Boise Foothills every year in the spring as they head to higher pastures. Wilder rancher Frank Shirts typically runs three to four bands of sheep through the foothills for several weeks in April. See the Life on the Range story about Shirts and his sheep.

“We’ve taken the girls to show them the sheep in the foothills, up there on the Crestline Trail, just to show them what’s going on,” Koberg says, “and see the shepherds up there with their camps set up and everything. And now, it’s a made-for-public event so everyone can learn about the sheep.”

Jennie Rylee, environmental education coordinator for the City of Boise at the Jim Hall Foothills Learning Center, said, “It’s one of those things where, the more you know, the more you understand; the less fear and distrust you have. You get up close and personal with the sheep,  then suddenly that day when you’re out running around the trails and the sheep are in the way, it’s not this horrible thing. It’s like hey, I got to see these sheep up close and personal. Isn’t that cool that they’re trailing through the foothills right now.” 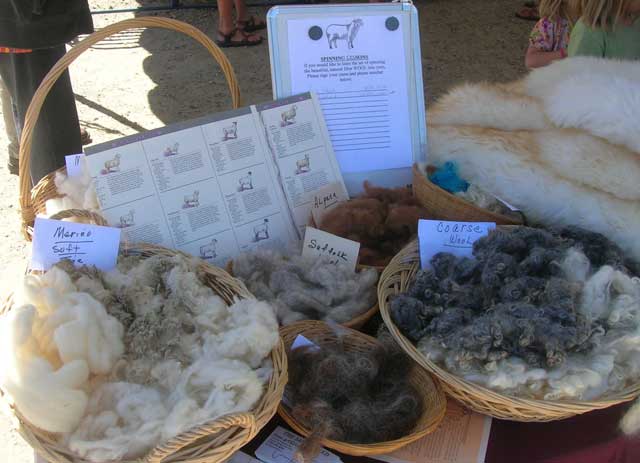 Spinners displayed the variety of wool available for making garments.

The Sheep in the Foothills event is one of the most popular held each year, Rylee says. “We love this day. It brings in a lot of new people to the foothills learning center, and it’s a wonderful way for the sheep folks to get the word out about what they’re doing.”

Behind the Foothills Learning Center, LaVon Calzacorta demonstrated how to herd sheep with a trained dog. He showed how it’s done with a border collie named “Gus.” Using a whistle, Calzacorta directed the dog to herd the sheep in different directions, clockwise, and counter-clockwise, and then herd them into a pen.

Calzacorta grew up on a ranch, so taking up the hobby of working with herding dogs was a natural for him. “I went to a sheep trial and thought, now, that’s something I can do. I’ve been doing it for 17 years now.”

Calzacorta says he goes to about 10-12 field trails per year all over the Pacific Northwest. There are modest prizes for the winners. “You’re not going to get rich, but if you pay for your weekend, you’re happy,” he says. “The money is in training and selling the dogs.” 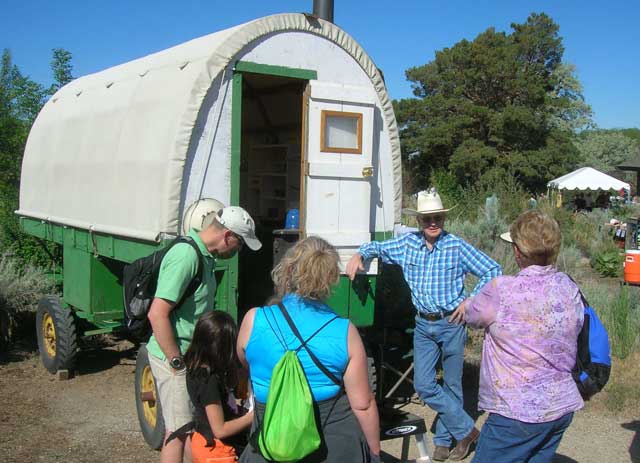 James England talks to folks about sheep camp wagons. England’s father refurbished this one on display.

When training the dogs, you try to figure out their natural abilities and build from there, Calzacorta says. “They’re just like us. They’ll be right-handed or left-handed. They’ll be good at driving or fetching, but they won’t be able to do the other.”

To teach the dogs to herd from the right or left, he uses whistle commands. “Clockwise, or come by … (two quick whistles) ; Counter-clockwise or away (a descending call). “He understands what I want.” 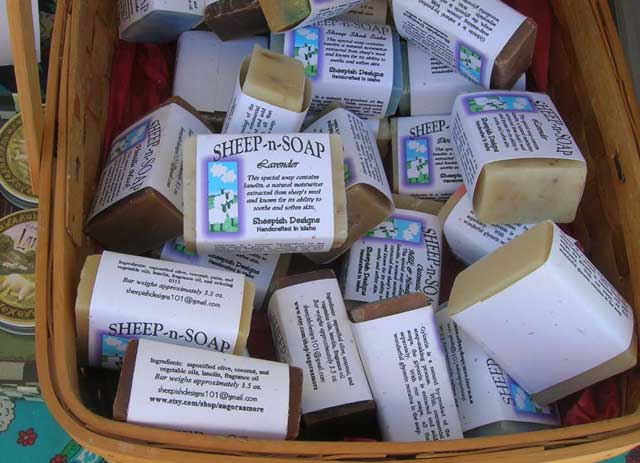 “Border collies come from the border lands of Wales and England,” said a P.A. announcer who explained the dog movements. “They help control and manage livestock on behalf of the owner.”

And with that, the dog moved the sheep into the pen. People applauded and a kid said, “That was  awesome LaVon and Gus!”

Sheep-related vendors sold soap, arts and crafts, barbecue sauce and kids could feel the different kinds of wool produced by sheep. People also learned about sheep camps, the unique and compact camping wagons that some sheep herders still use to this day. James England of Emmett brought a refurbished sheep camp to the event.

“It’s what the sheep herders lived out of for 6-8 months of the year. It’s the original self-contained camper wagon. Short of a couple of amenities called a rest room and a shower,” England says.

The camps have a bed, storage spaces for clothes and food, and a wood stove to keep things warm. England’s father restored the camp that he brought to the event. “I think he built 5-7 of them from the ground up.” 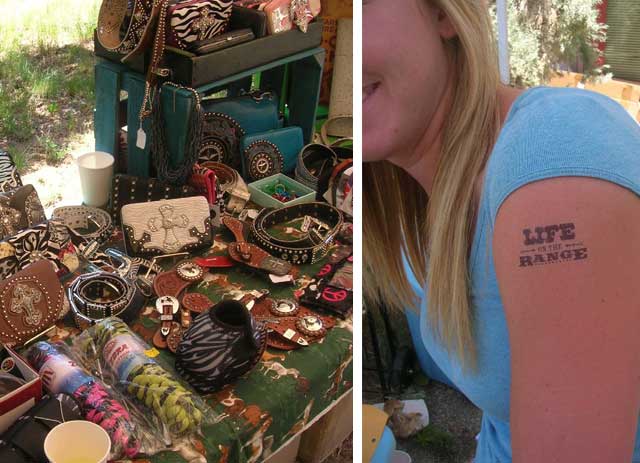 Leather goods, jewelry, brace-lets, among other things, were on display … Look at the Tat on this woman’s shoulder!

England, who is a veterinarian at the University of Idaho Caine Veterinary Teaching Center, says he’s pleased to see all the people attending the sheep in the foothills event.  “It’s good to educate people where our food comes from No. 1, and No. 2, our food is doing other things for us, it’s protecting the range, it’s cleaning the range, plus we’re getting other things out of it, like wool,” England says.

“You talk about multiple-use lands, this is a multiple use animal. Look at the sheep, you’ve got protein, you’ve got fiber, you’ve got weed control, and you’ve got rangeland control, there’s all sorts of things that they do.”

All in all, the Sheep in the Foothills event was a great day for the public to learn about sheep.

“It’s really neat, especially the education component,” said Lance Holloway, while bouncing his young boy in his lap. “Seeing the sheep out here ties it to the history of Idaho. My grandpa was a herder for the Littles way back when, in the 1950s. I’ve been raised around sheep my whole life.”