Western juniper trees have been steadily encroaching on meadows and valleys in the greater Owyhee County area over the last 50 years, and in the last 10-15 years, it’s been getting even more pronounced. As a result, juniper trees are consuming habitat that normally would be used by the greater sage-grouse, wildlife and cattle.

Aerial surveys show that juniper density has increased 3-5 fold in Owyhee County, compared to historic levels. The absence of fire has accelerated the invasion. 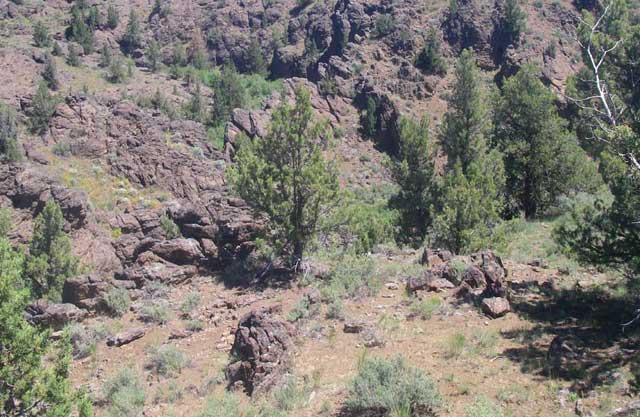 Western juniper trees have been expanding throughout the Owyhee Mountains for decades. Sage-grouse, below, a candi-date species for protection under the Endangered Species Act, are the catalyst for stopping the spread of juniper trees.

“Something needs to be done,” says Owyhee County Commissioner Jerry Hoagland, a member of the Owyhee County Sage-Grouse Working Group and an Owyhee County commissioner. “When we started fighting fire to protect our property, the juniper started to expand, and it’s like a wildfire now, the way they’re expanding.”

Sage-grouse are listed as a “candidate” species under the Endangered Species Act, so attention is being focused on improving habitat for the birds to increase their numbers. The Owyhee Mountains are considered a “core” area for sage-grouse, with 250 leks (or mating grounds) and historically robust populations. Juniper encroachment is considered to be one of the top 3 threats to sage-grouse survival in the area, according to wildlife experts.

Art Talsma, Director of Restoration and Stewardship for The Nature Conservancy and a member of the Owyhee County Sage-Grouse Working Group, says that the intrusion of juniper trees into meadow and valley areas have had a direct negative impact on sage-grouse nesting habitat and brood-rearing habitat. 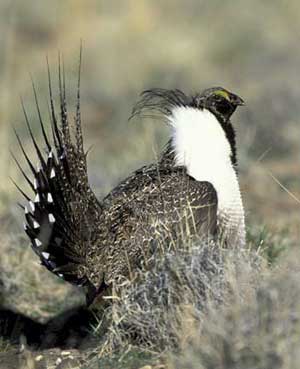 “The leks tell you where the sage-grouse want to be,” Talsma says. ” The bird wants to find a nest within one or two miles of the dancing ground where reproduction takes place.  They look for sagebrush or bitterbrush habitat, and that’s where they will hide their nest. But they will not select the site at all if there’s a tall juniper tree there.  So as juniper encroach on a meadow, the sage-grouse have to vacate it — they flat-out won’t stay there.”

The tall juniper trees make sage-grouse nervous about predators. “The juniper tree, to them, is a place where predators can sneak up on them,” Talsma says. “One of the No. 1 predators for sage-grouse is the raven. So the raven will perch there, follow the bird back to the nest site and steal the eggs.”

Historically, the Bureau of Land Management has cut down juniper trees to address the problem, with an intent to follow up those treatments with prescribed burning in the spring or fall. The BLM has  treated about 33,000 acres with that method so far, but no prescribed burning has occurred as yet. 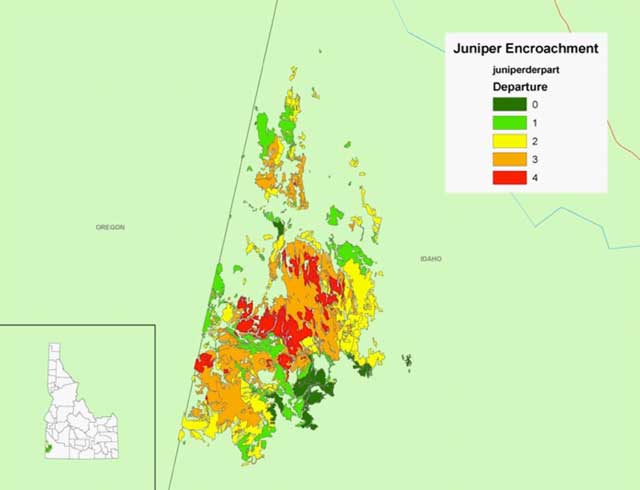 Graphic shows the extent of the juniper invasion issue in the Owyhees. The trees normally grew in the rocks surrounding meadows, and over time, the trees have encroached into habitats where they never grew before. The reason for the spread is the absence of fire. (Courtesy The Nature Con-servancy)

David Bunker of Branch Enterprises, a contractor who has been grinding up juniper trees in the Owyhees for several years, explains.

“Mastication is chewing something to a pulp,” says Bunker. “Our track-hoe machines are based on what I call a thunk theory.  They have two great big blades on a wheel. Each blade weighs 46 pounds, and we just hammer the tree to death while it’s going round and round.”

Bunker lifts the rotating attachment over the top of a juniper tree and grinds up the trees, leaving nothing but chips behind. In a matter of minutes, the entire tree is turned into chips.

Bunker says it’s critically important that the entire tree is ground up. “One of the  main things about a juniper is that you can’t leave any green material or it’ll grow back,” he says. 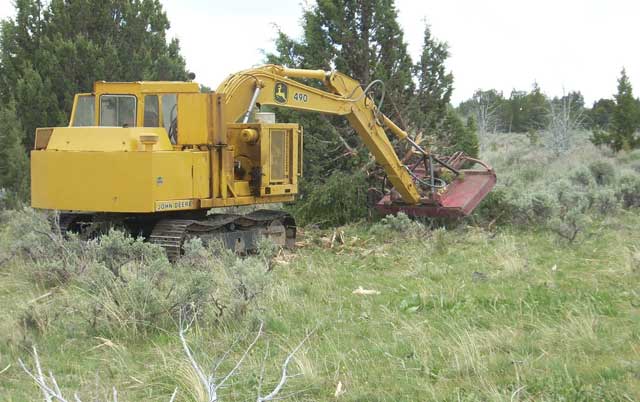 David Bunker of Branch Enterprises in Nyssa, OR, grinds up juniper trees in the Wilson Meadow area in the Owyhee Mountains. This control method is called “juniper mastication.”

Jordan Valley Rancher Dennis Stanford, who checked out the progress of juniper mastication on his private land in the Owyhees, likes the results so far. “It’s a big help. It brings up the water table for one thing,” he says. “When you kill a juniper tree, you’re taking away something that’s wicking the moisture away from the sagebrush, forbs, grasses and everything else. So it’s a win-win situation. It’s more forage for the cows and better wildlife habitat for all wildlife.”

Cost-share funds  from the Natural Resources Conservation Service (NRCS) are available to remove juniper trees from meadow areas on private lands. Stanford and other Owyhee County ranchers are tapping into the program to restore their meadows. The control work fits into the overall NRCS Sage-grouse Special Initiative in Idaho and 10 other western states. Sixteen-million dollars are available for the recovery effort. Three juniper mastication projects in the Owyhees have cost about $80 to $250/acre, depending on tree density. 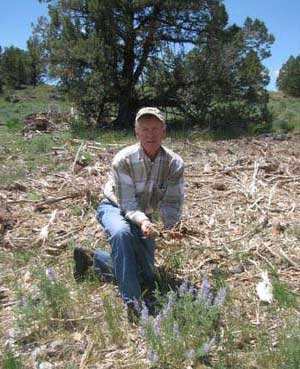 Art Talsma of The Nature Conservancy shows how native plants — bunchgrasses and wildflowers — bounce back quickly after junipers have been removed.

About 5,000 acres of juniper encroachment areas have been treated on private lands in the Owyhees for the last several years, with more to come.

“Sage grouse is a big component of it,” Stanford says. “It gives us the tool to try to help, and it’s definitely helping. My brother has a picture of a sage-grouse nesting right over here where they did the mastication. It’s a win for the livestock, it’s a win for the wildlife, and down the road, it could keep us from having to list the sage-grouse” as an endangered species.

Similar treatments in Oregon have shown good results. Following juniper control efforts, the number of male sage-grouse have doubled on leks 2-3 years after treatment.  Talsma expects similar results to occur in the Wilson Meadows on Stanford’s land. “We find out from talking to the ranchers that the birds have been coming to this site for years,” he says. “Nearby here, we surveyed a site that had over 200 birds in the fall. And that’s just 3-4 miles from here. So we know, when we open it up, we’ll get the bird use back.” 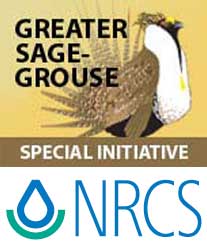 Plant communities are bouncing back rapidly following juniper removal. “We’re seeing a quick response,” Talsma says. “The forbs and grasses are growing back within a year of treatment.”

Perennial grasses such as bluebunch wheatgrass and Idaho fescue are growing back amid the wood chips left behind from juniper mastication. Forbs like western yarrow and others are sprouting as well.

“This is what the ranchers like to see, and I like to see it too as a wildlife biologist, because we also have sage-grouse using this meadow, and we also have elk here, antelope and mule deer,” Talsma says. 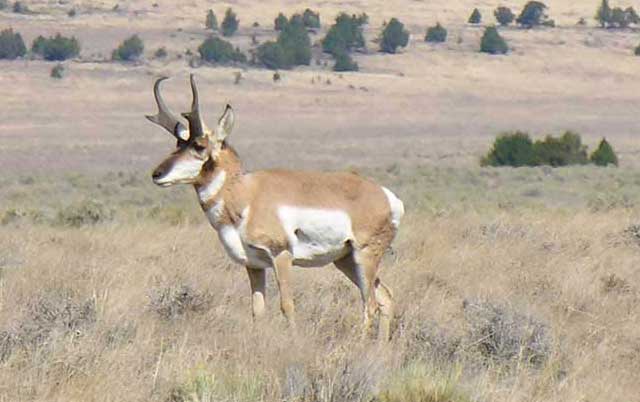 Pronghorn antelope are one of many wildlife species that benefit from juniper tree removal.

Juniper mastication treatments on another ranch in the Owyhees also has produced positive results. Property in Bull Basin, owned by George and Donna Bennett, was treated with a roller-drum masticator in Fall 2011. The project doubled the number acres of suitable habitat for sage-grouse to 484 acres, and it opened up habitat for aspen trees to expand. 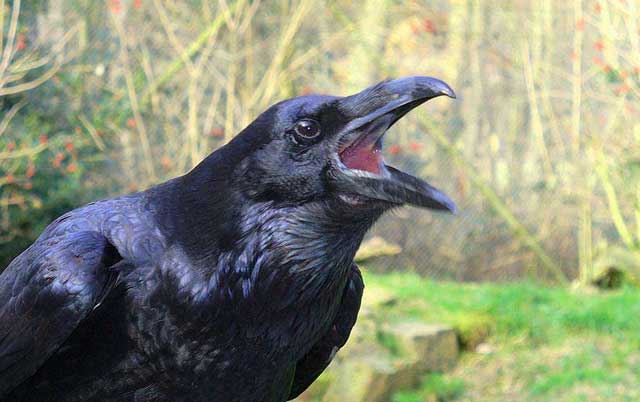 The raven is considered one of the biggest threats to sage-grouse survival. Ravens like to hide in juniper trees and eat sage-grouse eggs after a pair has set up a nest. Juniper removal reduces that threat because the ravens no longer have a place to hide.

“One of our target species to benefit here is aspen,” Talsma says. “Quaking aspen is a native tree. It only occupies 1 percent of the landscape, but 60 percent of the birds and mammals go through it. So opening up an aspen stand benefits a ton of other species as well.”

The Nature Conservancy, which is a member of the Owyhee County Sage-Grouse Working Group, is monitoring the results of juniper control efforts to document improvements along with the U.S. Fish and Wildlife Service, Idaho Department of Fish and Game and NRCS. 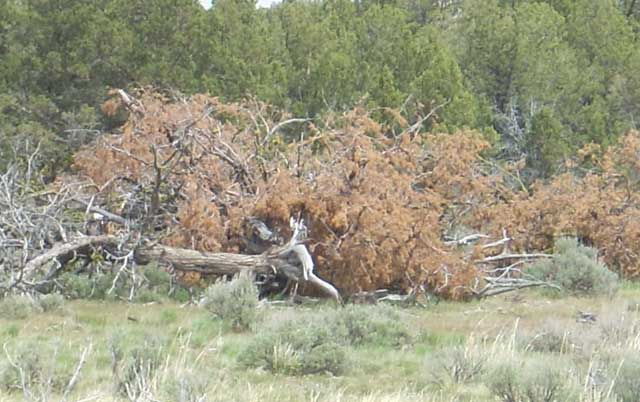 The Bureau of Land Management has been cutting down juniper trees in the Owyhee Mountains for a number of years as its preferred control method, with the intention of following up those treatments with pre-scribed burning. No burning has occurred as yet, however.

The roller-drum masticator was most effective on smaller juniper trees and the larger rotating blades have been more effective on larger trees. The costs are being documented on various private land sites, and the NRCS funds are covering the costs, Stanford says.

While juniper mastication appears to be effective on a small scale, BLM officials say that it probably is not practical to use that technique on a large scale. The agency plans to move forward with prescribed burning to follow up “cut and lay” juniper harvesting in the Castle Creek area, and it is currently analyzing how to treat about 50,000 acres in the Juniper Mountain area and more areas that need treatment in the Bruneau Resource Area. 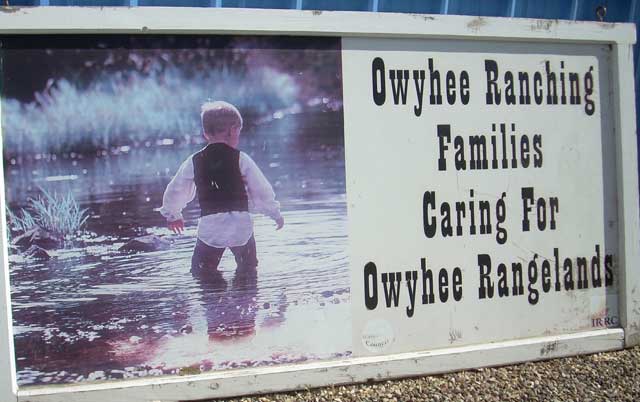 Trying to grind up all the juniper trees on Juniper Mountain, for example, would leave wood chips covering the ground “2-3 feet deep,” Okeson said.

The Nature Conservancy, in cooperation with the U.S. Fish and Wildlife Service, Idaho Department of Fish and Game and NRCS, is documenting plant re-growth with remote photography equipment and on-site field visits on private land treatment areas in the Owyhees. Talsma is pleased with the results, noting that perennial grasses and forbs are growing back after juniper removal, and there are no invasive weeds or non-native vegetation sprouting after treatments. 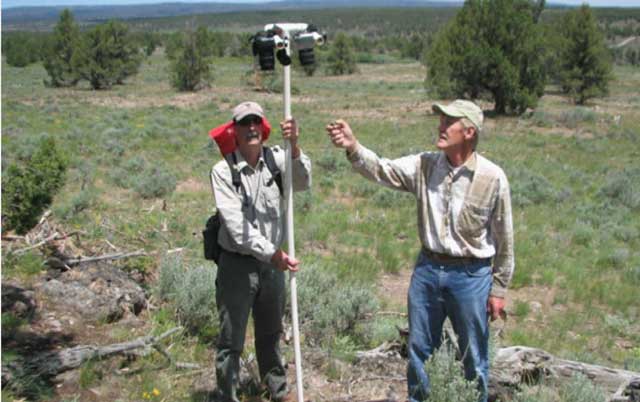 Art Talsma and a volunteer monitor the response of vegetation following juniper control.

“We want to bring this range back to its best ecological condition,” he says.