In the arid West, water is key to the survival of everything. That’s why early-day pioneers staked out the riverbottoms when they settled the West. It was all about water.

In recent years, the U.S. Fish and Wildlife Service has been partnering with ranchers in Owyhee County to create more ponds and wetlands on private lands. 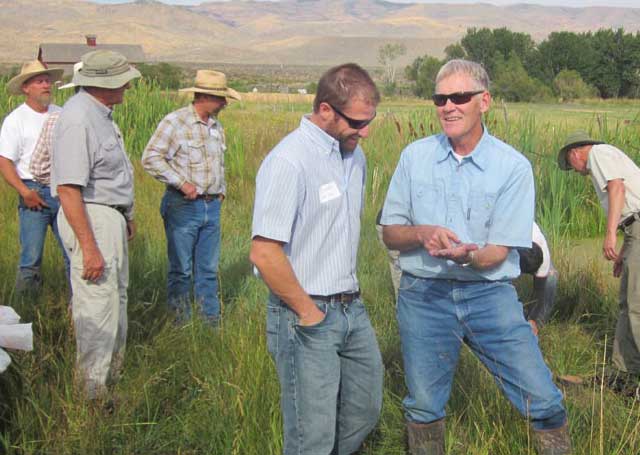 “Initially, the project was focused on Columbia spotted frogs, which were a candidate species, but we recognized that many species would beneift from the creation of wetlands,” says Kristin Lohr, a wildlife biologist for the U.S. Fish and Wildlife Service, Idaho, in Boise.

“These wetlands provide habitat for not just Columbia spotted frogs, but also other animals such as amphibians, birds, bats, deer and antelope.” 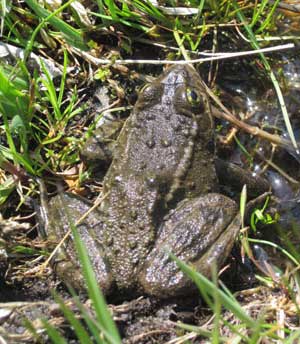 “As we’re standing here, we see red-winged blackbirds in the cat-tails, and we heard a Pacific chorus frog calling from the edge of the wetland. So animals are already moving in and using these wetlands.”

The Fish and Wildlife Service wants to create more habitat for birds and wildlife — that’s a key part of their mission. But Tom Biebighauser, a national authority on wetlands who taught a workshop in Owyhee County, said the projects can have a dual purpose.

“The message he gave is we can do both. You can create some wildlife-friendly improvements on your property, and at the same time, make an improvement for your operation,” says John Romero, co-owner of the ZX Ranch with his wife, Cathy, and the Richards family. 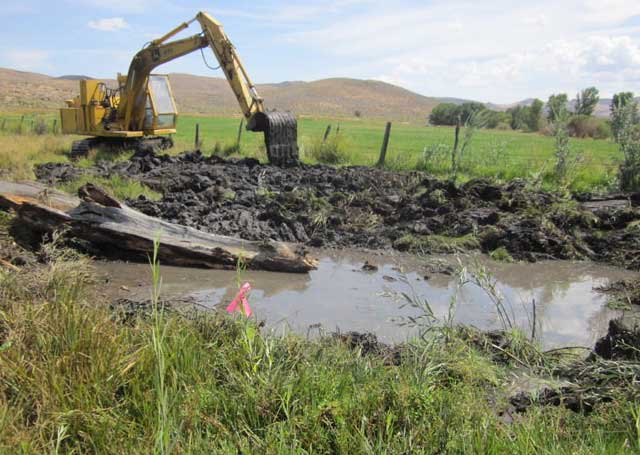 One of the ponds on the ZX Ranch enlarged an existing wetland to create more wildlife habitat.

During a wetlands field workshop held by Tom Biebighauser in the Reynolds Creek area of Owyhee County, they dug a new wetlands pond on John and Cathy Romero’s ranch. Through the Fish and Wildlife Service’s “Partners for Fish and Wildlife” program, 50% cost-share funds are available to assist with the cost of pond construction.

“With the help of the Fish and Wildlife Service, that costshare, particularly for any farmer or rancher who’s interested, it makes it an attractive feature,” John Romero says. 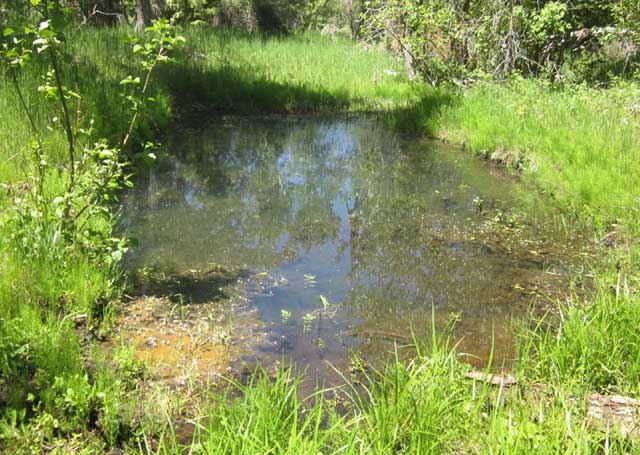 This is one of many frog ponds that have been created on Jerry Hoagland’s ranch, creating more habitat for Columbia spotted frogs and other wildlife.

Biebighauser recommends a shallow pond design to maximize on wildlife habitat. Kristin Lohr explains. “The way to do it and have more wildlife, is you get away from the cereal bowl and go with a satellite dish, with more gently sloping edges, and it provides more nesting cover and hiding cover for animals,” Lohr says. “Plus, you have open water, so things like bats that like to take water on the wing, they have access to water.” 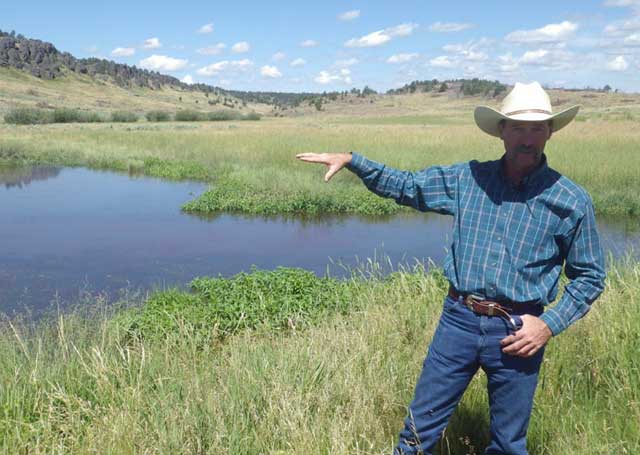 Chris Black has built a series of ponds in the Toy Meadows area for wildlife, cattle and water storage. The ponds help sub-irrigate the meadow, growing tall grass for cattle, while also providing habitat for frogs and other wildlife.

Rancher Jerry Hoagland has dug many ponds in upper Reynolds Creek for spotted frogs in partnership with the Fish and Wildlife Service.

“We dug about 20 ponds for the Columbia spotted frog to their design, and we’ve been monitoring them for the last three years,” Hoagland says. “The population is gradually growing. We counted over 120 juveniles and I don’t know how many adults in that pond. A beaver turned 4 small ponds into one large pond. That was absolutely amazing! That’s wow! We’re finding more frogs and we’ll help keep it off the (endangered species) list.” 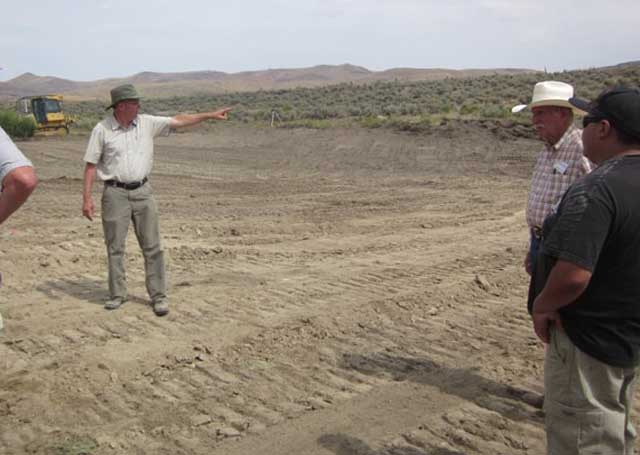 Wetlands expert Tom Biebighauser talks about the design features of the Hoagland pond in the Reynolds Creek area. The pond is located near a sage grouse lek, and it also will be valuable for waterfowl and other critters.

During the wetlands workshop, Hoagland made some more land available on his Dry Creek ranch for a pond.

Art Talsma of the Nature Conservancy thinks the Hoagland pond will create valuable habitat for wildlife and livestock.

“Reynolds Creek is kind of famous, its watershed has been well-studied, but there aren’t many pondage places in this stretch of land,” Talsma says. “The first species that I think of as benefitting is sage grouse. We have a sage grouse lek above here in the distance, we have sagebrush in the background, that’s where they nest, but where they raise their broods is next to these wet meadows and small wetlands.”

“And of course waterfowl come into this,” he continues. “Waterfowl in the Owyhees migrate through and need a high-energy source of food when they’re passing through, and that’s what shallow wetlands give you. Sometimes you’ll see thousands of ducks landing on that, feeding intensely, and then heading up to Canada.”

The Romero family enjoys seeing waterfowl and other wildlife using the ponds as well.

California quail, pronghorn antelope, red-winged blackbirds and bats are among the species that benefit from wetlands.

“We are in tune with the wildlife scene,” John Romero says. “And we do like wildlife around us. We have sandhill cranes, lots of waterfowl, pheasants, quail, badgers, coyotes, Canada geese, a variety of songbirds and things like that.”

Another reason that Black set up his ponds was to sub-irrigate the meadows. “I wanted them to leak, I wanted them to recharge the system,” Black says. “In the early spring, when we have runoff in this particular area, we have 3-5 days of heavy runoff, an immense amount of water coming down. But then we don’t have any water. So, my idea was to hold that water in the system, longer, so it can build these meadows and recharge the aquifer, instead of running off.”

In Toy Valley, Black grazes his cattle here in the fall, after it has been rested all summer. “As you can see, everything is at seed ripe and at its biological potential here. As you can see from the tall (head-high) grass.”

Sage grouse like to raise their young in wet meadows, where the chicks feed on insects and grow up quickly.

All of the ranchers who have worked on enhancing wetlands recommend it for other landowners. A key aspect is that it’s much quicker and easier to make conservation improvements on private lands.

“Especially here in Owyhee County, water is the key thing,” Romero says. “In the West, particularly in the drier parts of the West, the valuable lands for wildlife and livestock are on the private ground. So to make improvements for wildlife, a lot of people are just discovering that if we can help out the private landowner, then we can also help wildlife.”

Indeed, a recent public opinion poll conducted by the University of Idaho for the Idaho Rangeland Resource Commission, found that 84 percent of the public recognizes that private ranchlands provide important wild¬life habitat. On a scale of 1-7, 68 percent rated the value of private farms and ranches for wildlife as being a 5 or higher. “The more habitat we can create, the better we are off in the long run,” Black says.

“More habitat for wildlife, the more profit you can make from cattle if you can enhance a meadow like this, or have a clean drink of water for your cow. Yeah I would recommend it for other ranchers.”

“I think it’s positive for everybody,” Hoagland adds.