Over the years, ranchers often have tried to help the Bureau of Land Management fight range fires on public lands. After all, it’s in their interest to prevent rangelands from burning up and losing vital feed for their livestock. Many ranchers have permits from the BLM to graze livestock on public lands during the summer months. The public grasslands provide important summer forage for livestock.

But in recent times, federal policy has prohibited ranchers from fighting fires on public lands for safety and liability reasons. 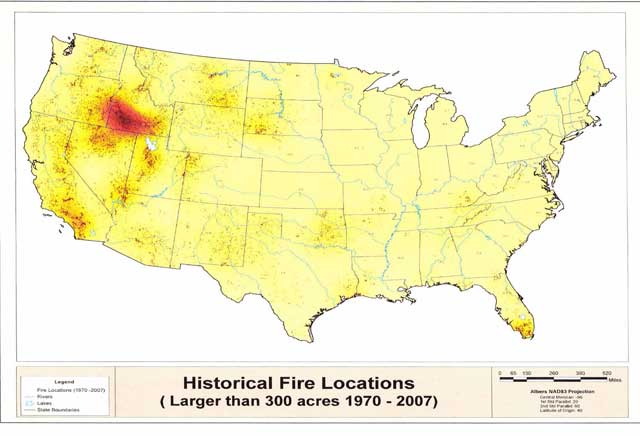 Rangelands around Mountain Home in the Snake River Plain have burned repeatedly over the last three decades. The Rural Fire Protection Association was formed in hopes of halting the cycle.

“We had a fire, a lightning strike that started some ground on fire  over by the Blair Trail Reservoir,” said Wes Wootan, a Glenns Ferry farmer and Elmore County commissioner. “Two ranchers had it controlled and shut down until the BLM could get there. ”

When the BLM fire crew showed up, Wootan said, the ranchers “were asked to leave, they did, and that fire that was potentially a 5-15 acre fire grew to a 40,000-acre fire.”

“We do make a living off this land,” says Charlie Lyons, Mountain Home rancher. “It’s important to us to protect the resource the best we could. Some of the tactics that the BLM was using weren’t getting to the issue of stopping the fires at a short duration.”

In fact, the rangelands near Mountain Home have been getting burned repeatedly almost every year. A national wildfire frequency map shows that the Southwest Idaho region burns more often than any other place in the nation. The fire frequency is related to people throwing cigarettes out the window of vehicles on Interstate 84, flaming bits of rubber from flat tires, careless target-shooting practices, and more. It’s also due to the large amount of highly flammable cheatgrass growing in the area.

“In the United States, the most fires are right here, they burn the most ground,” Wootan says. “Because of that, it’s proactive for us to put something together that addresses the issue of first response.”

BLM officials admit that the federal policy regarding whether ranchers could help fighting range fires has been inconsistent. “In the late 80s, ranchers would come to fires and do some suppression work, but they were kind of operating as a stand-alone entity,” says Steve Acarregui, fire operations manager for the BLM Boise District. “The feds were doing their own thing, and the ranchers were doing their own thing, which raises a lot of safety concerns. And it was a very unsafe way to suppress a fire.”

The BLM’s policy that prohibited ranchers and other private citizens from working on wildfires resulted from a lawsuit filed against the BLM in the aftermath of the Initial Point range fire near Kuna in 1995, a fire that killed two Kuna firefighters.

“What came out of that was ranchers weren’t allowed to come on a fire,” Acarregui said. “It was a safety liability issue for the government.” 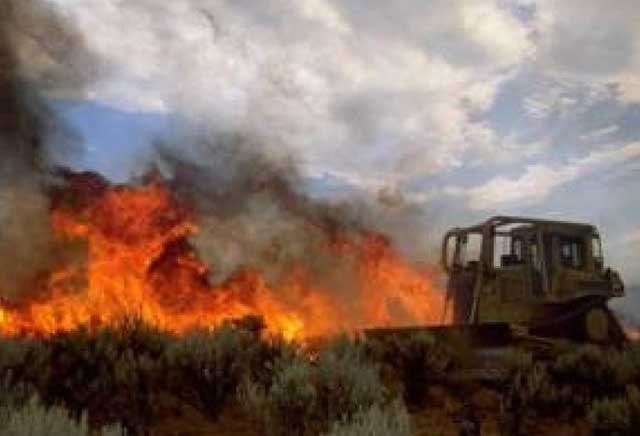 A lot of ranchers already own dozers and volunteer their time to dig
fire line for the BLM or IDL.

Over the winter of 2012, several Mountain Home ranchers contacted the Idaho Department of Lands and the BLM about working together to stop wildfires. Using a private-public partnership model developed in Oregon, the agencies helped the ranchers form Idaho’s first Rangeland Fire Protection Association.

Craig Glazier, National Fire Plan coordinator for the Idaho Department of Lands, notes that “Idaho code that spoke to timber protection associations – which Idaho has a long history of – also addressed rangeland associations, but no one had taken advantage of it until this time.” 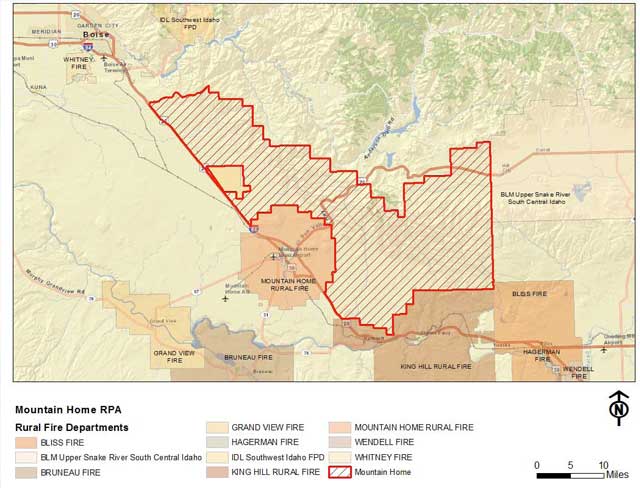 Glazier sees a clear need for the Mountain Home Rangeland Fire Protection Association, and perhaps others in southern Idaho. “We’re extremely excited about it,” he says.

To form the association, the parties signed agreements to work together, and the ranchers received more than 40 hours of wildfire training. The ranchers also had to create a board of directors, form a nonprofit organization, and obtain liability insurance.  After completing the training, the ranchers received official firefighting gear, communications equipment, and resources for fighting fires, such as a shiny red fire engine from the Idaho Dept. of Lands.

All of these things take time. “It takes someone who is fairly well-motivated,” Glazier says. “There’s a fair amount of work involved.”

Wootan is pleased to see the RFPA come together in a year’s time. “We brought all of the entities together to end up with a positive situation that addressed everyone’s issues,” he said.

The agreement came together just in time for the ranchers to help the BLM fight the Scout Fire near Mountain Home in July. 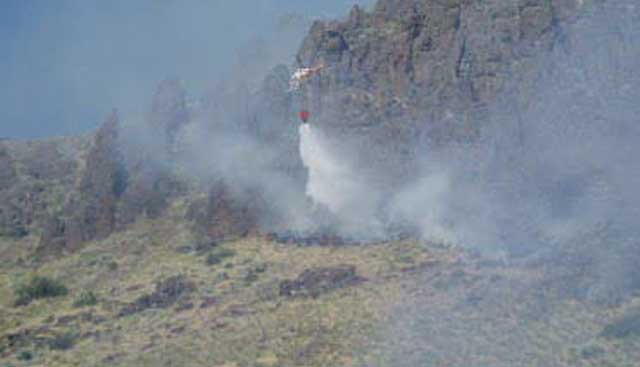 Ranchers and the BLM worked together to halt the Stout fire at 12,000 acres in the sweltering heat of July. BLM fire officials called it “a good catch.”

“This was the first fire we interacted on and incorporated the Rangeland Fire Protection Association into suppression operations, and it went very well,” says Acarregui. “Some of the actual firefighting resources they provided were dozers, fire tenders and engines, they did a lot of line construction, and it was very beneficial.”

“The other part of it was their local knowledge,” Acarregui continues. “I logged 10-12 hours with a rancher in my command vehicle, strategizing on how to put the fire out. Where water resources are, access routes and developing contingency plans.  We were able to get a rancher in a helicopter for a recon flight and doing the same sort of things. That proved very valuable. ”

As things turned out, the range fire was contained and controlled at 12,000 acres. “It was a good catch considering the conditions and the resources assigned,” Acarregui says. 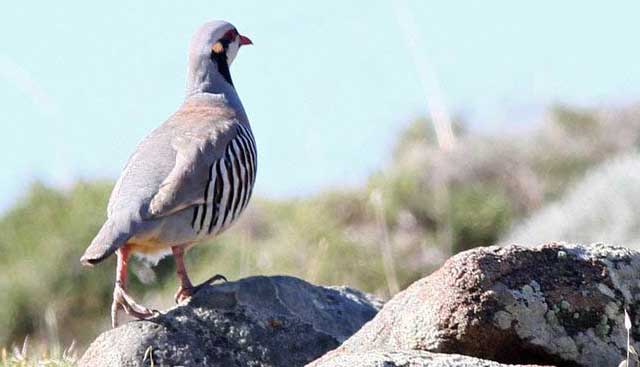 Still, it was the 3rd time that the rocky foothills north of Mountain Home had burned in the last 10 years. Charlie Lyons laments the loss of his spring range and wildlife habitat.

“From a ranching standpoint, yeah, it knocks the air out of us, we’re two years out of here, it’ll be a tremendous expense,” Lyons says. “From a habitat issue, this is huge! It took the last of the chukar habitat. It’s a bigger picture than making a dollar off a cow. It really is for me.”

Mountain Home rancher John McGrew agrees. “If we can keep that range productive, it’s good for us and it’s good for the game animals. That’s my primary concern. It’s such a waste of resources to watch it go up in smoke.”

Glazier expects that once other ranchers in southern Idaho hear about the Mountain Home RFPA, they may want to create another fire protection association in their area. “We’re excited to see these guys take on the challenge and try to solve this problem at the local level,” he says. “We would strongly encourage others to contact us, and we’ll do what we can to help them out. There’s about 2 million acres of unprotected area in southern Idaho, so there’s a real need there.”

Glazier can be contacted at the Idaho Department of Lands in Coeur d’Alene, 208-666-8646 or cglazier@idl.idaho.gov