A stream-restoration project on Fish Creek near Carey, including the installation of about 35 woody  structures and 14 beaver dam analogs in the creek in August last year, raised concerns about the timely delivery of water to downstream irrigators, officials said this week.

But in response to concerns by irrigators, the Idaho Department of Water Resources (IDWR) has issued  temporary staff guidance for reviewing and processing permit applications that propose installation of beaver dam analogs (BDAs) and post-assisted log structures (PALs). 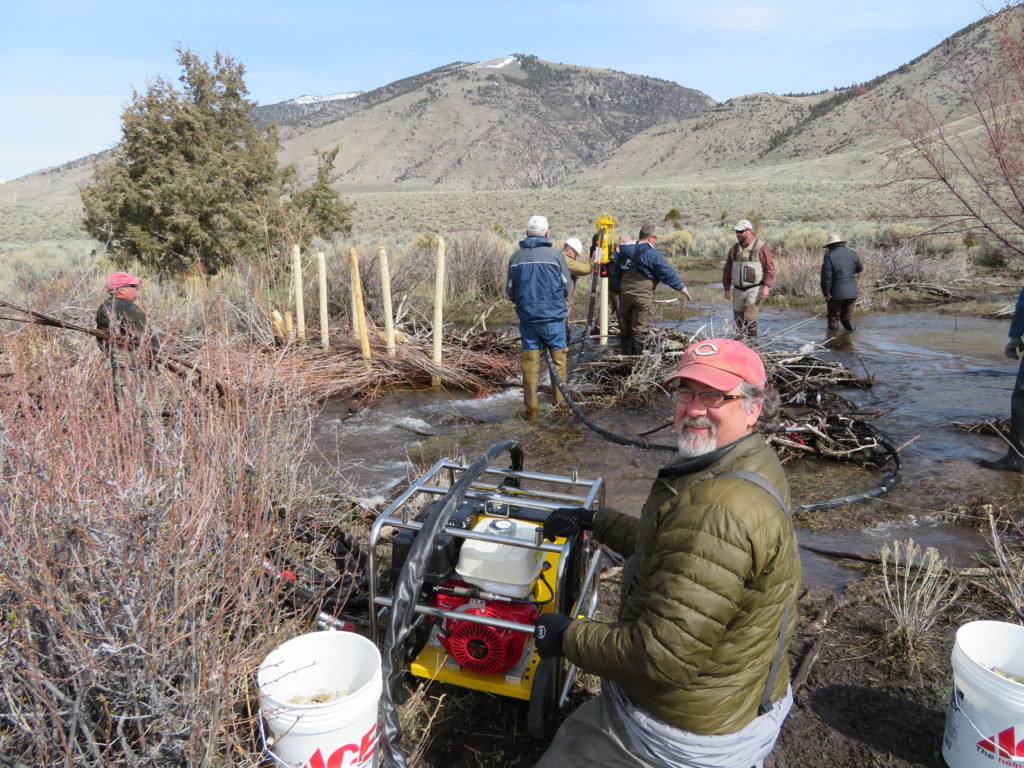 The new permitting guidance memo issued by IDWR on Dec. 19, 2019, will require BDA and PAL projects to be installed outside of the irrigation season, after Oct. 1 or prior to April 1, said Aaron Golart who oversees stream-alteration permits for IDWR.

The Fish Creek BDAs were installed in August during low flows. IDWR received complaints from downstream water users that they were not receiving their full allotment of water, which they suspected  could be due to the installed BDAs and PALs, Golart told an audience of about 150 people at the annual meeting of the Idaho Rangeland Conservation Partnership in Boise.

IDWR officials were invited to speak at the meeting as part of a panel discussion on the benefits of using beavers or low-tech beaver-like structures to restore streams, improve riparian areas and enhance fish and wildlife habitat.

The permitting guidance requires parties that seek to install in-stream BDA and PAL structures to measure baseline stream flows above and below project locations prior to construction, and post-construction, Golart said. Project proponents also will need to gather input from adjacent landowners and irrigators prior to project approval.

The Idaho Rangeland Resources Commission publicized two BDA project areas last summer that were widely supported by ranchers and conservation professionals from state and federal agencies. Titled “Beaver Dam Analogs Catching on in Idaho,” the IRRC story was widely distributed in Idaho via a written feature story and a YouTube video. The story was reprinted in Intermountain Farm & Ranch, the Idaho Press and Twin Falls Times-News. 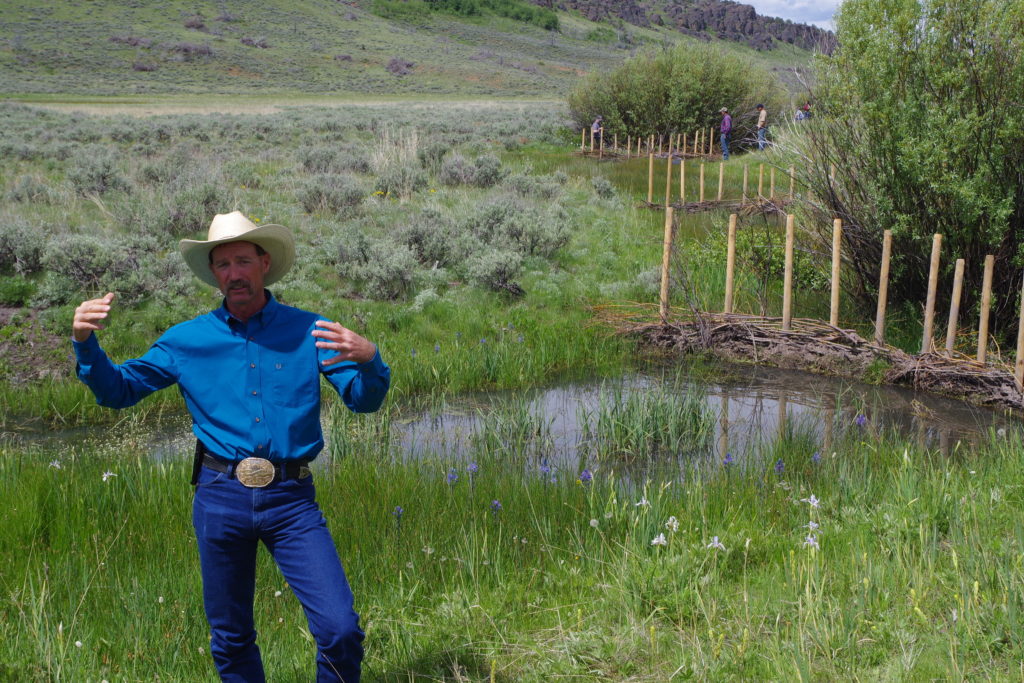 Bruneau rancher Chris Black invited conservation professionals to install beaver dam analogs on Hurry Up Creek on his private land in the Owyhee Mountains. The BDAs are turning an emphemeral stream into a perennial stream.

Bruneau Rancher Chris Black, who worked with Idaho Fish and Game, the U.S. Fish and Wildlife Service, Governor’s Office of Species Conservation, Natural Resources Conservation Service, and other agencies,  likes how the BDA’s store water on Hurry-Up Creek in the Owyhee Mountains.

“They’re backing water up, they’re creating habitat for spotted frogs, for sage grouse, for beaver,” Black said.  “These meadows are like a sponge. They take that water and they hold it, and release it slowly into the system. With water being held back in the system, it releases slowly, and that benefits downstream users, too, so it’s a benefit for everything.”

Any BDA or PAL projects that are proposed to be built on ephemeral (non-perennial) streams such as Hurry Up Creek will be exempt from the requirements, Golart said, because those types of streams are exempt from stream-channel alteration permitting regulations.

“The intent of the new guidance memo is to address any issues that arise from the delivery of water and water rights,” Golart said.

Federal and state conservation professionals are excited about installing more BDA projects in Idaho, said Jason Pyron, sage grouse coordinator for the U.S. Fish and Wildlife Service in Idaho. But the projects should be installed correctly with outreach to nearby ranchers and farmers to ensure there are no adverse impacts to downstream users, he said.

“We’re on the precipice of one of the most ambitious stream-restoration efforts about to unfold in Idaho and the West,” Pyron said. “But in the case of the Fish Creek project, we got out ahead ourselves. We have to do these projects right so there are no adverse impacts to downstream users.”

For any BDA or PAL project located on perennial streams, an IDWR stream-alteration permit and a 404 permit from the Army of Corps of Engineers are required, officials said. 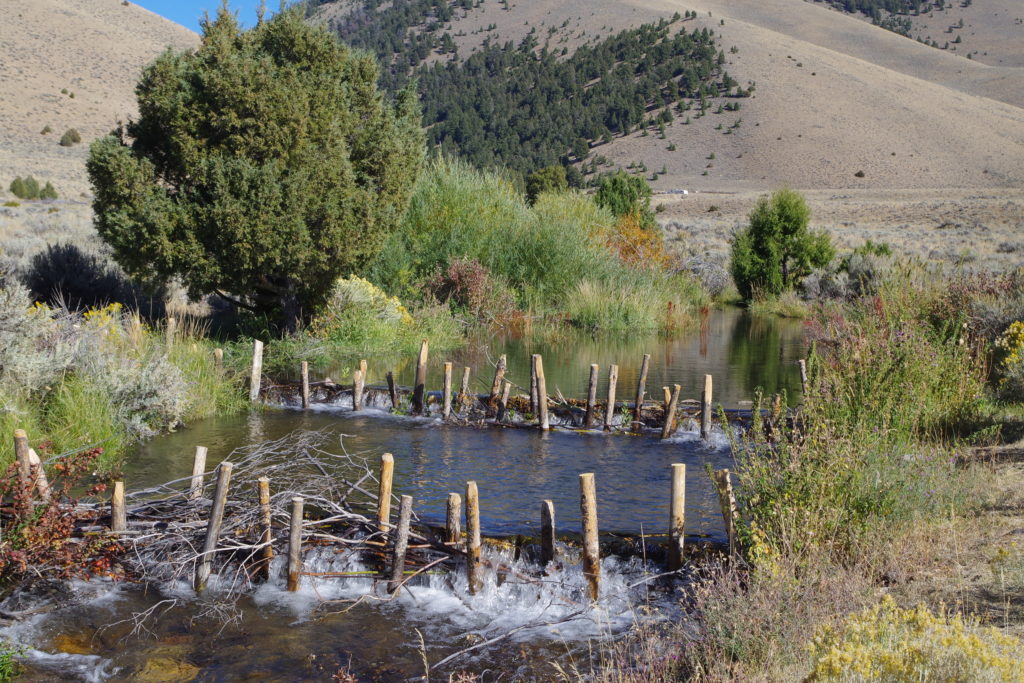 BDAs on Hawley Creek near Leadore

In a second project spotlighted in the Life on the Range story about “Beaver Dam Analogs Catching on in Idaho,” Daniel Bertram of the Governor’s Office of Species Conservation in Salmon showed how to balance a project that involved irrigators while also installing BDA’s downstream. This project, on Hawley Creek, featured new irrigation diversions and pipelines at the top of the project to ensure irrigation water and water rights were met for adjacent landowners.

And then OSC worked with multiple partners to install BDA’s below the irrigation diversions to benefit fish and wildlife habitat. Streamflow monitoring is occurring in the BDA reach of Hawley Creek to track the water quantity of stream flows over time.

Charles Sandford, a U.S. FWS wildlife biologist who is working to get BDA projects permitted on BLM lands, sees many benefits associated with the projects, in terms of expanding fish and wildlife habitat for mule deer, sage grouse, Columbia spotted frogs, songbirds and many other species.

“There is no intention of affecting water rights or base flows with these projects,” Sandford said. “They need to be done in a manner that works for everybody.” 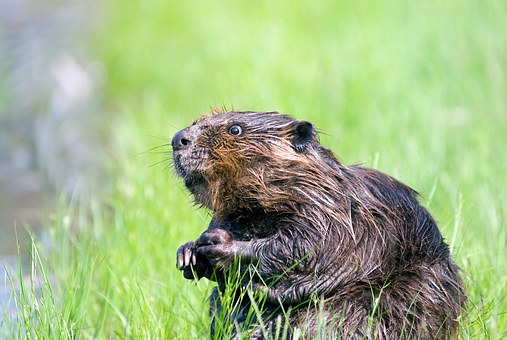 Experts noted that an important aspect of BDAs and PALs is that they are built out of primitive, permeable, and biodegradable materials. They’re expected to be a temporary enhancement to facilitate stream-restoration projects. The long-term objective is typically to invite beavers to recolonize restored streams, officials said. The BDAs and PALs can play a temporary role to help rebuild a riparian environment until beavers move in.

If BDA projects are proposed high in the headwaters of a particular stream, many miles from downstream irrigators, IDWR may waive some of the information requested under the guidance, Golart said. Projects will be evaluated on a case-by-case basis.

“The guidance memo is temporary, and it’s flexible,” he said.