Kimberly sheep rancher John Noh is having a great summer. A long, wet spring has produced plenty of feed for his sheep, and better yet, wool prices and lamb prices are at all-time highs.

“We’re enjoying record high prices for both lamb and wool. They’ve steadily climbed through the spring and they’ve pretty much stayed there,” said Noh, as he checked on his flocks grazing in foot-high grass under the cover of aspen and pine trees in the South Hills, south of Kimberly, Idaho.

Noh is cautiously optimistic, knowing that this year’s prices contrast sharply with poor prices for wool and lamb that western sheep ranchers have endured for a decade.  But demand seems to be increasing for lamb and China has been importing lots of wool for its textile plants.

“It’s an old industry that has seen a lot of peaks and valleys, and I think we’re climbing the mountain again,” he says.

The Noh Sheep Company has been operating in the Magic Valley area since 1912. John’s grandfather established the sheep ranch, and his father, Laird Noh, ran it for 35 years in between serving as an Idaho State Senator and chairing the all-important Senator Resources and Environment Committee. John Noh has been running the sheep operation for more than a decade along with his wife, Julie, and his Peruvian herders Felix and Celestino.

The base ranch for the Noh Sheep Co. is in Castleford, a 200-acre spread with sheep lambing pens, cropland and pasture. The Nohs maintain two bands of sheep at the present time. They graze their sheep on the base ranch during the winter, as well as on BLM desert land, private land and rented pasture.  In late May, the sheep are trucked to U.S. Forest Service land in the South Hills, where they spend the summer grazing on three grazing allotments totaling about 36,000 acres.

On the public lands, the Nohs manage with rest-rotation grazing principles, a concept designed by Gus Hormay of the Forest service more than 40 years ago. “Since we  have three different sheep allotments on the national forest, and only run two bands of sheep, we rest and rotate some areas every year,” Noh says.

That means portions of the Noh’s grazing allotments do not receive any livestock grazing for a year’s time, while other areas are grazed at least once because of the large amount of area available. “We like to go in a big circle and go lightly over the whole allotment, while resting the areas that are scheduled for rest,” Noh says.

Rest-rotation grazing management is generally favored by the Forest Service because it allows riparian areas and rangelands to rest from livestock grazing for a year or more.

An article by the University of Arizona Cooperative Extension Service explains the benefits. 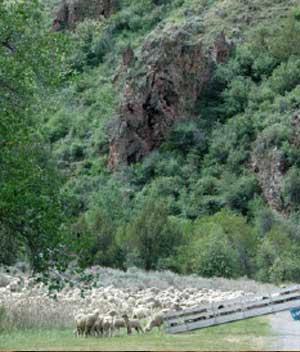 The Nohs have been grazing in the South Hills for nearly a century, and they take pride in leaving the range in good condition. “It’s good country. It’s really well suited for sheep grazing,” Noh said. “And it’s convenient. It’s close to home, and it fits really well into our other grazing areas.”

Noh says he’s fortunate because he doesn’t have to cope with any endangered  species issues in the South Hills, and there aren’t any wolves roaming the area, either.  That keeps his predation losses to a minimum. “I’ve only lost a few animals to predators in the South Hills,” he says. “But out in the desert, the coyotes are pretty thick and we have larger losses out there.”

But Noh does have to co-exist with a plethora of recreation interests who like to go horseback riding, dirt biking and mountain biking in the Third Fork of Rock Creek area, where Noh releases the sheep into the southern portion of the South Hills in May.

Over the last few years, Noh helped the Idaho Rangeland Resource Commission craft a new program called “Care and Share” in which ranchers make extra efforts to let recreationists know when sheep are going to be grazing in a popular recreation zone, how to act around guard dogs, and the importance of closing gates. The program also reminds national forest users about the importance of packing out litter and being good stewards of the land.

In mid-May, Noh puts up a Care & Share sign by the Third Fork trailhead, along with his name and telephone number to give recreationists a head’s up that sheep will be released into the area soon.

“This is an area that has a tremendous amount of recreation,” he says. “I want them to know that the sheep are coming so they can contact me if they have any concerns.” 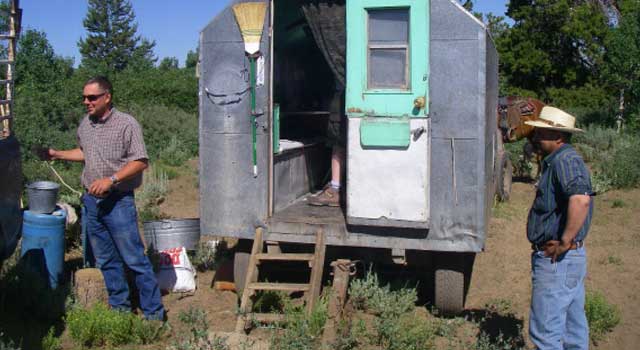 Keeping the sheep-herders well-stocked with food and supplies is a key part of running a sheep business.

Noh believes there is plenty of room in the South Hills for everyone to enjoy the national forest.

“The Care & Share campaign has worked very well to get ranchers and recreationists on the same page, we communcate better with each other,” Noh says.

“If the animals are managed correctly, and the people are managed, everything can work in harmony,  and keep the conflicts to a minimum,” he says. “And everybody can come up here and enjoy themselves, and the sheep can gain weight, and we can make a living.”