Ranching in the Kootenai River Valley is much different than in S. Idaho; plus, all about cattle brands

The Kootenai River Valley, near Bonner’s Ferry, Idaho, is a great place to raise cattle and crops because the climate is cool and moist. Average rainfall is 22 inches per year.

Local rancher Merle Olsen , who also serves on the Idaho State Brand Board and is a board member of the Idaho Cattle Association, doesn’t worry about running out of water.  Flooding is a much bigger concern 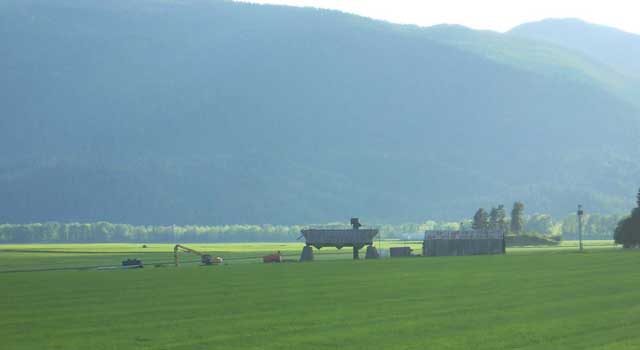 The verdant fields in the Kootenai River Valley reveal how plenty of moisture leads to big-volume crops and three full cuttings of hay.

“In this whole Kootenai River Valley, we have 35,000 acres of cropland. The valley is broken up into 15 different districts,” Olsen explains, looking out at this year’s crops and cattle pasture. “It was diked in the 1940s, and as the areas were diked, each district was given a number. This one is District 3.”
Each water district has large-horsepower pumps that draw water out of the fields and sends it to the river. None of the fields need to be irrigated.
“The whole valley is subirrigated with moisture coming up from below — some of it is seepage from the river, and some of it is springs from the high mountains,” Olsen says. “All of the water has to be pumped off. When the river is low enough, it will gravity flow to the river. But when the river is high, we have to pump the water off.

“It’s a little bit different from southern Idaho where you guys have to pump the water on. Pump it off. If you don’t, boy, you’re underwater.”

The Olsen  Ranch, or Rymo Cattle Company, raises crops and grazes cattle in three different water districts in the valley.  “There’s 900 acres on this piece of ground here,” Olsen says of District 1. “We raise canola, winter wheat and we have a rotational pasture system for grazing. It’s a small amount of acreage, but it will hold a lot of cattle through the summer months.”

The name Rymo Cattle Co., comes from the combination of Ryan Mai and Olsen’s daughter, Maureen Olsen Mai, who are taking over the ranch operation as Olsen moves into retirement. Ryan Mai, who grew up in Filer near Twin Falls, says ranching in North Idaho is a stark contrast from where he grew up.

“It’s sort of like two different worlds between here and there. We had irrigated cropland down there – sugar beets, corn, beans, whatever, all kinds of row crops versus up here, it’s all dryland grain, oil and beef cattle,” Mai says.

The Kootenai River Valley “has some of the most fertile soil in the Northwest. There’s not many places where you can have dryland cropland and get 3 cuttings of alfalfa and 100-110 bushel wheat without having to irrigate. We get it all from Mother Nature.”

The Olsen Ranch is located close to the Kootenai National Wildlife Refuge, so it’s not surprising to see a lot of wildlife in the crop fields and cattle pastures, not to mention in the refuge.  “It’s not uncommon to see deer, elk, moose, bear – just about anything you can think of,” Mai says. 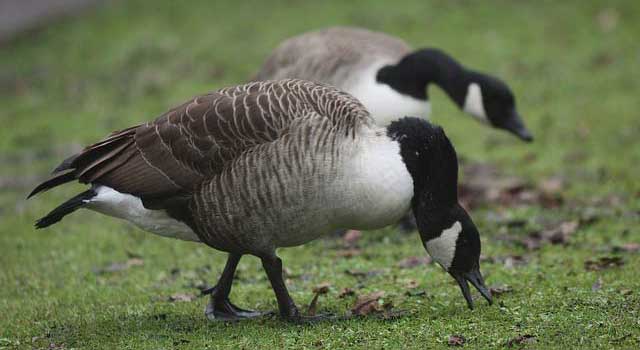 Merle Olsen set up a system of water troughs for his cattle in Water District #1 to prevent a water ditch from being trampled by the cattle and leave short grass ditch banks for geese and goslings in the springtime.

Another common visitor are Canada geese. Olsen has developed a watering system for his cattle in grazing pastures near his ranch that also provide grazing areas for the geese.  The system keeps the cattle from trampling a water ditch and leaves short grass for geese.

“The cows drink out of three stock tanks,” Olsen says. “They’re all on a float so we can keep the water from overflowing.  And now, as you can see, they keep the grass down, but they don’t go into the ditch; they just don’t.  In the springtime, we have pretty close to 2,000 geese that come in and they’ll eat the short grass on the banks.” 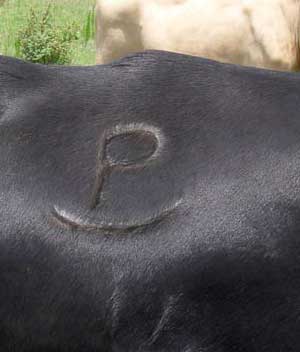 Cattle brands are the primary way for ranchers to identify cattle and provide proof of ownership.

Olsen’s watering system also prevented the need to put up a fence to protect the ditch banks for geese. “I always maintain if you put a fence up, it’s tall dead grass, and it’s a dead zone. Nobody can use it,” he says.

The geese like the ditch area while raising their young. “They can just dive into the water if predators show up. They hang out here until the goslings have developed and can fly away.”

The Olsens have two brands for their ranch — the 3 Bar M brand that came with the ranch when they bought it, and their current brand is a T-Hanging Heart.

Olsen knows a lot about brands because he’s served on the state brand board for nearly 10 years.  He’s one of two members on the 5-member board that represent cow-calf producers. Branding livestock dates back to the turn of the century. It’s the best way to prove ownership. There are more than 18,000 registered cattle brands in Idaho.

“In the state of Idaho and across the West, it’s the mainstay for identification, the owner and identification of cattle,” Olsen notes. “With unbranded cattle, it’s pretty hard to find the owner, they can’t talk. If you’ve got a brand, it’s pretty easy.”

The office of the Idaho Brand Inspector is a law enforcement agency, a branch of the Idaho State Police. Stealing cattle is still a common occurrence.

“Whenever you have good cattle prices, you’re going to have more theft. People see a way to make a fast buck,” Olsen says.

It’s harder to catch cattle thieves than it once was. “Cattle can move so much faster now. Trucks can be loaded and they’ll be half-way across the country in 24 hours. We’ve got 5th-wheel trailers that can be in a pasture, loaded up and gone in nothing flat.” 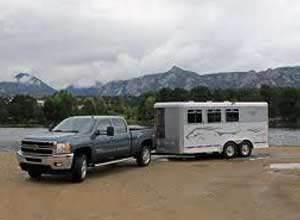 Cattle thieves can load up cattle and be half way across the country before someone realizes that some animals have been stolen, Olsen says.

Some cases even involve organized crime. In a case in Owyhee County several years ago, people were stealing calves from a dairy to pay for illegal drugs. A woman who was the mastermind in the scheme was wanted for murder in Mexico. The woman, Lyla Sepulveda Hernandez, was convicted of the illegal possession of controlled substances with the intent to deliver, and grand theft by possession. She was sentenced to serve 5 years in the Idaho State Penitentiary.

To make the bust, the Idaho Brand Inspector’s office went undercover, put some unbranded Holstein calves in the dairy and placed microchips in the calves to be able to track their movement.

“We figured it was an inside job,” Olsen says. “The calves were chipped so they could be traced. And sure enough, they were able to catch the guys just because of that.” 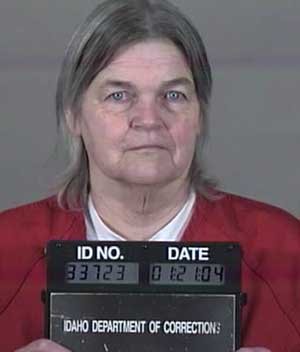 Lyla Sepulveda Hernandez, was convicted of stealing and selling $500 Holstein calves to raise money to buy and sell drugs in Owyhee County.

State Brand Inspector Larry Hayhurst said the criminal investigation took three months. They used an undercover informant to help make the case. There were three SWAT team raids at the place of Hernandez’ residence and several other locations to seize 17 Holstein calves, including the four calves that had been chipped, and three or four horses. “It was a pretty big ordeal to make that bust,” Hayhurst recalls.

The calves were selling for about $500 each on the open market, and that money was being used to buy drugs, Hayhurst said. The stolen calves were shipped in a large, carpeted passenger van. “That’s not the type of vehicle you’d expect someone to use to transport cattle,” he said.

Other issues include random people shooting cows. “Those people I’m sure are doing it maliciously; they’re certainly not doing it for the meat because they just leave the cattle,” Olsen says.

The bottom line is that cattle ranchers should brand their animals for proof of ownership. “It’s for their own protection and the public at large,” Olsen says. 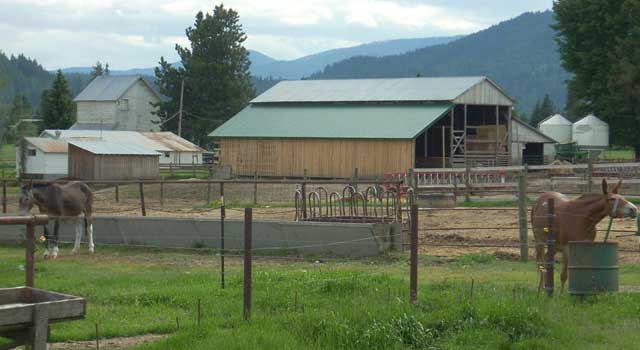 Ryan and Maureen Olsen Mai built their home up the hill from the Olsen Ranch.

Besides Olsen ‘s service on the brand board and on the Idaho Cattle Association board, he is moving toward retirement and handing over management of the ranch to daughter Maureen, her husband,  Ryan Mai, and their son. The couple really enjoys ranching in the Kootenai River Valley.

“I needed my education in case I wanted to pursue other careers,” says Maureen Mai. “I even thought about being a vet, but I knew I wanted to work on cattle and horses, and my professor said, do you want to work on your animals or someone else’s? And I said, I want to work on mine. I always wanted to come back.”

Says Ryan Mai, “I saw a chance to live in a place like this and still farm and ranch. It’s almost like you’re camping everyday living in this valley between two mountain ranges. And there’s all kinds of recreation opportunities … lots of lakes, streams, fishing and hunting. Just a lot of things to do.”