The use of goats to control noxious weeds is increasingly being embraced as an effective, non-toxic method of weed control in Idaho and elsewhere. Ray Holes, a former Whitebird cattle rancher, has been a leader in the targeted grazing industry, building up his goat herds so he can meet the growing demand. 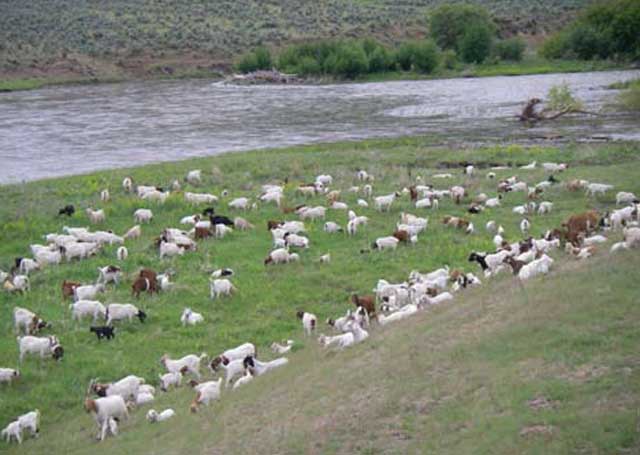 More than 1,000 goats feed on leafy spurge along the banks of the Weiser River in May.

Nine years ago, Washington County was one of the first places to try goat-weed control in Idaho to control Leafy Spurge, a ubiquitous noxious weed that had spread into the Weiser River canyon in the early 1970s. That year, the goats worked 1,200 acres. This year, they’ll graze 10,500 acres of state, county and private land, including areas along the Weiser River. 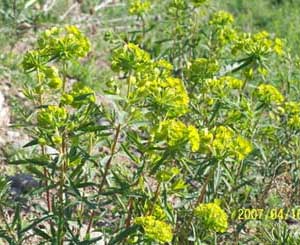 “Leafy Spurge is one of the worst noxious weeds in Washington County,” says Bonnie Davis, Washington County Weed Superintendent. “It has a substantial root system that can run as deep or deeper than 30 feet. That makes it extremely difficult to control.”

Prior to goat grazing, big meadows along the Weiser River were smothered by yellow Leafy Spurge. Herbicide sprays and biological controls couldn’t stop the spread. The noxious weed not only out-competes native plants, forbs and grasses, it also contains a milky sap that can blind people.

Looking for solutions, Davis invited Ray Holes to give a presentation about using goats to control noxious weeds. Holes had experimented with goats on his own ranch to control yellow star thistle, a prolific noxious weed that produces long, nasty thorns.

“We were spending $20,000 a year to control yellow star, and we couldn’t get ahead of it,” says Holes. “We decided to get the goats, thinking that maybe we could break even on our costs if they would eat the yellow star. We found out they did a lot more than that. They ate the yellow star, they ate the brush and a lot of other weeds we had. It ended up being a much better deal.”

When Holes first talked to the Washington County Weed Control Board, local ranchers were cynical. They were worried that the goats would consume forage intended for their cows.

“It was a tough sell in our county. We’re basically a cattle county,” Davis says. 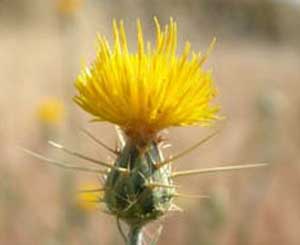 But Holes explained that the goats would increase the forage for livestock by reducing Leafy Spurge and other weeds. It’s called targeted grazing.

“In the long-term picture, if it’s done correctly, it provides more forage,” Holes says. “That’s the whole idea of it.”

Holes convinced the weed board to give it a try. It helped that he has been a lifelong rancher himself.

Peruvian herders keep the goats on the move, Holes points out, so they primarily eat the weeds and move on, leaving the grass underneath for cattle. But timing is everything. The goats are released on the range in May, when Leafy Spurge is most palatable.

“These goats get turned on to the flavor of Leafy Spurge, and it’s like caffeine or chocolate — they’ll actually seek it out over the other vegetation,” Davis says with a smile.

The goats stop Leafy Spurge from spreading by eating the top of the plants, prevent the seed head from blooming, and the root system shrinks over time, killing off many of the plants.

“We’ll never eradicate it but we’ve controlled it and contained it in numerous areas,” Davis says. “I’m very proud of this. I’m known as the goat lady.”

If Davis is the goat lady, Holes is the goat king. He’s been building up his goat herds as he’s received more grazing contracts from private landowners, county weed offices, state agencies, Native American tribes, the Bureau of Land Management, the U.S. Forest Service and other federal agencies. Nowadays, his goat herds number 7,000 head; they are controlling weeds and other targeted grazing projects in 5 western states (California, Oregon, Washington, Idaho and Montana).

“I see it really taking off,” Holes says. “We’ve never advertised, and we’re the largest in the nation. It’s all been word of mouth.”

He winters the animals near Hermiston, Oregon. In the spring, he sets up a big goat “kidding” operation where thousands of nannies give birth to 2-4 kids apiece. He’s built a white, covered structure, similar to a barn, to give the nannies and their babies a place to stay out of the rain or snow right after the “kids” are born.

Peruvian herders keep the nannies in a little pen with the newborn kids. They put iodine on their navel, make sure the nannies are nursing, and the nannies and kids are doing OK. Then, after 12 hours or so, they’re moved outside for mixing into larger groups to make room for more newborns coming in. 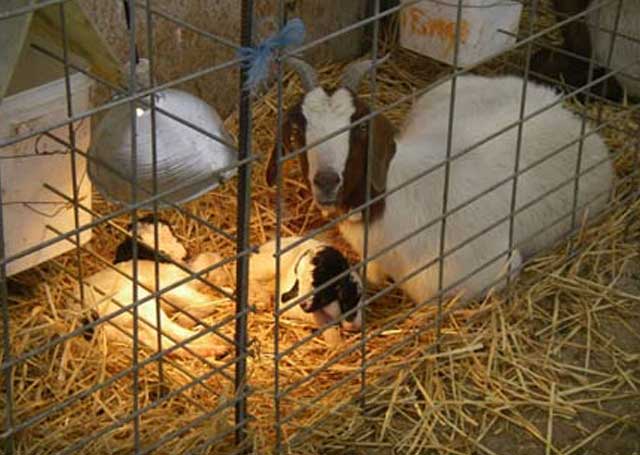 A nanny and her twins rest in the goat barn before being placed outside with larger groups.

Holes learned from a few Texas goat ranchers that the younger nannies need to be grouped with older nannies when they’re out grazing because the older nannies know what to do. The young ones would be lost without elder leaders, he says. “If you put a bunch of young nannies together, they don’t know who to follow,” he says. “They need a leader, a matriarch. ” 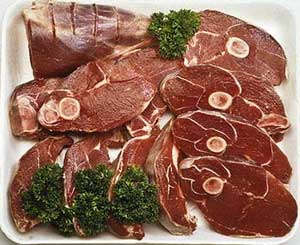 Goat meat is the most widely consumed food item in the world.

From the time when goats have kids, he gradually mixes the goat families into bigger groups with a mix of older nannies and young ones so they will graze together well as a unit. Over a matter of days, a group of 4 is blended with another group of 4, and then it expands to a group of 16, 32, etc. “That’s how you create a band of goats,” he says. A goat band is comprised of more than 1,000 animals. (correct, Ray?)

Holes sells surplus goat kids for meat. Each nanny can support only 1 or 2 kids when they’re out grazing in the field. Goat meat is popular with ethnic groups, and prices have been lucrative. Goat meat is actually the most widely consumed food item in the world.

“They’re the hottest thing on the market,” he says. “The same set of goats that were going for 60-80 cents per pound are now going for 1.80 – 2 dollars per pound, which is a huge difference, and it’s basically because of demand.”

The Hermiston-Tri Cities, Washington area is now the home base for Holes’ goat grazing operation. In the early spring, grass seed farmers hire Holes to graze on grass seed fields, plus the area doubles as his kidding operation. The weather is much milder than it is in Idaho, and the location is more central to Holes’ grazing contracts.

For five years, Holes commuted back and forth to Idaho, but now he’s moved his wife, Lisa, and three children (all under the age of 5) to Kennewick, Wash. The family always has been an integral part of the goat grazing operation; they travel along with Ray in a semi-truck when they ship goats all over the West.

“I call it the Romper Room on 18-wheels,” says Lisa Holes. “My Mom teases us about being gypsies, and what a lifestyle we have. We go pretty much wherever Ray goes.”

Often times, Lisa says, Ray Jr. and the other kids will ride with Ray in the semi-truck, and she’ll tag along behind in one of their other vehicles, towing along a camp trailer for Peruvian herders. They have 12 herders that keep watch over the goat herds all over the West, and so they often need to resupply the herders, making sure they have plenty of food and other supplies, and food for the herding dogs and focus on their primary task at hand — keeping watch over the goats. 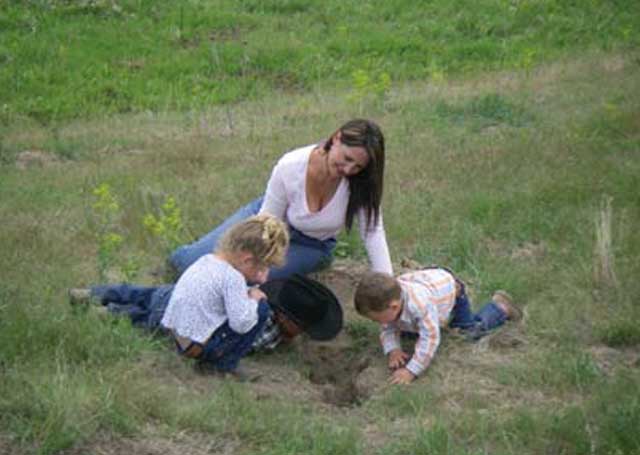 Lisa Holes with their three children, Cressis, Ray Jr., and Vade on the banks of the Weiser River.

Both Ray and Lisa Holes are happy that they can keep the family together despite the spread-out nature of his business.  “One thing I’m so happy that worked out is we managed to integrate our family into our livestock background and range lifestyle,” she says. “That was really important to both of us.”

Ray has a lifelong background in cattle ranching and Lisa came from the big game hunting and outfitting background in the Kamiah, Idaho, area, handling horses and pack stock. “I knew I wanted to be a stay-at-home mom, and I wanted my children to be with their dad, and it’s worked out perfectly,” she says.

Ray Holes, meanwhile, will continue to show the New West that goat grazing is a promising and environmentally sustainable way to control noxious weeds. “The idea that you’re killing weeds because you put spray on them is a fallacy, and it’s broke a lot of people trying to do it,” he says. “When I take the goats and put them in a truck and dump them out, they go to work. There’s no big question if they’re going to do it, and you’re in business.” 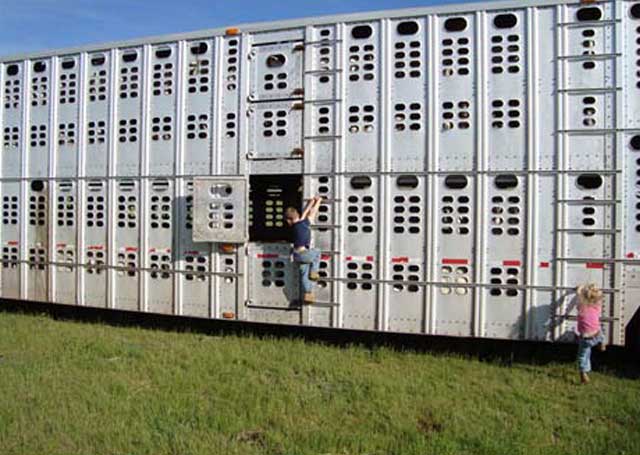 Ray Jr. and Cressis climb around on the goat trailer.

As the goat-weed control practice of targeted grazing becomes more widely accepted, Holes hopes that state and federal land managers will provide 50 percent cost-share funds for goat-weed control, as they do for spraying weeds with herbicides. Right now, the playing field is not level, he notes.

The Society of Range Management has provided forums for goat-weed control in its national meetings. That’s been helpful to convince land managers about the benefits and how to set up grazing contracts, Holes says. “At the top end, everyone in Washington D.C. is excited about it, and at the bottom end, on the ground, there’s a lot of people excited about it, and in the middle, there’s a vague void where agency folks don’t have a lot of direction,” he says. “Eventually, I think they’ll get it sorted out.”

In the meantime, Holes is racking up more and more examples where goat-weed control is working around the West — a rare bright spot in the war against noxious weeds.

If you’re interested in contacting Ray Holes about goat-weed control, you can call 208-740-9264 or email rayholes@yahoo.com.