Robert Stoll is a retired civil engineer  who was looking to find a safe and productive place for his investment  funds in the mid-1990s. He saw an advertisement for a cattle ranch in Hells Canyon, and it intrigued him. 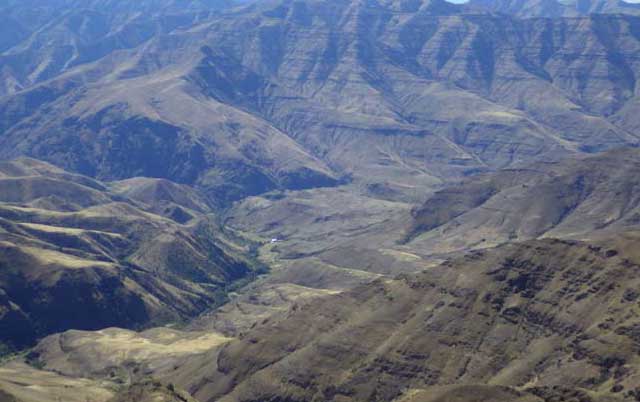 “There was an ad in the Lewiston paper, and it was about that big,” Stoll says. “It said this was place was available. Finally I got a tour, and I decided right then that it was pretty interesting and that this place has a lot of potential.”

Stoll is an avid chukar hunter, so he was excited about owning a ranch in Hells Canyon, a place that’s known for great chukar hunting. But he also liked the idea of owning a well-managed cattle ranch right on the edge of the Joseph Plains. The Hells Canyon National Recreation Area, all 652,488 acres of it, is his next-door neighbor.

Stoll also has a spectacular view out the backdoor of his ranch, where he can peer into the deepest gorge in North America. 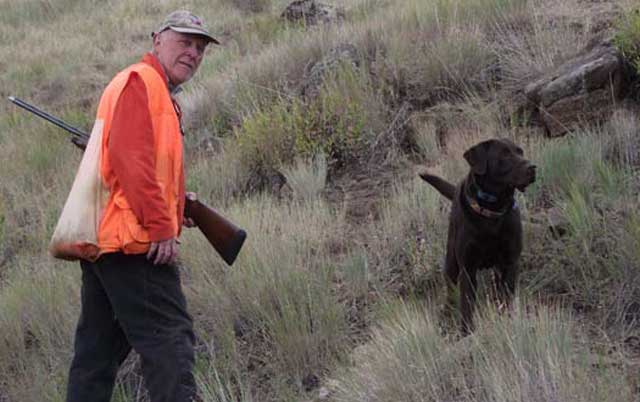 Robert Stoll is an avid chukar hunter. He says it’s pretty neat to own your own chukar hunting paradise in Hells Canyon.

“I think it’s fascinating,” he says. “One of my neighbors is Hells Canyon National Recreation Area — that’s about as good a neighbor as you could ask for in terms of not thinking of development. It’s a totally unique place. I love coming down here.

“It’s peaceful and quiet, turkeys run through the front yard, there’s been a bear coming down the road toward the house, and the elk have been running through here. And the deer are all over the place. Lots of fringe benefits. It’s a really neat experience.”

Marianne Lindsey is the ranch manager. She runs a cow-calf operation, raises yearling steers, and owns a big goat herd for controlling weeds. 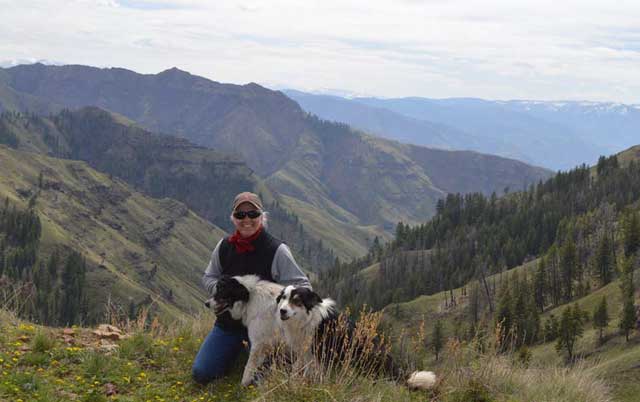 Marianne Lindsay manages the High Range Ranch. She grew up in the Whitebird area. She knows how to manage the cattle and goats for the improvement of the rangelands on private and public lands. Her objective is to preserve and enhance perennial bunchgrasses, a key source of winter feed for livestock and other critters.

Lindsey uses the goats to control Yellow starthistle, a noxious weed, on the ranch. Timing is critical, she says. “Yeah, you want to hit them when they start bolting, after the rosette stage, and they start to flower.  That’s the best time because the goats really like to eat that yellow flower.”

The cattle herd grazes on perennial grasses at the home ranch during the fall, winter and spring. They use a deferred-rotation grazing system to keep the range healthy.

“The bunchgrass  and the fescue, they’re the lifeblood of this river country,” Lindsay says. “It has nutrition to it, it stands up through the snow, the cattle can still eat it, and if you don’t have that, you don’t have a lot of forage for all winter long.”

During the summer, the cattle graze on Forest Service allotments near Grangeville.

Lindsey rents out her goats in the summer to  control weeds around private homes and to reduce  fire danger.  She stays pretty busy managing the goats and the livestock, and always working to improve the ranch. 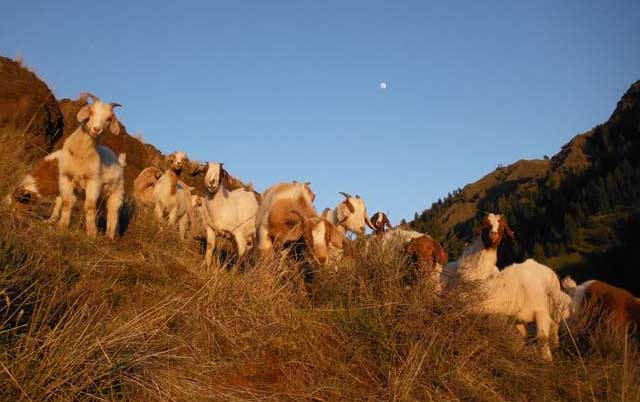 “Mary Ann has done more than I’ve asked for here, along with trying to manage her goats, and cattle,” Stoll says. “You’ve got a full-time job with that, let alone the restoration and what have you.” 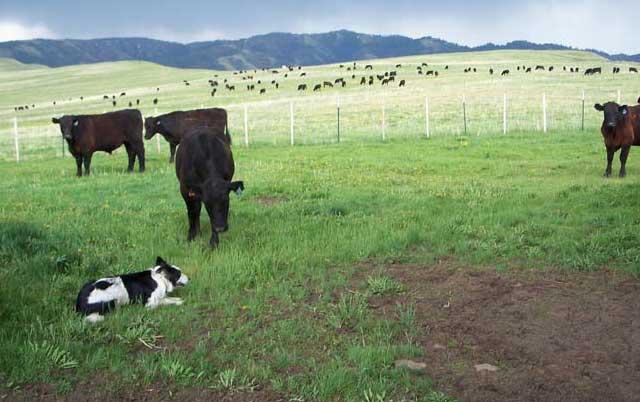 Lindsay manages the cattle-grazing operations with a deferred-rotation system, taking care to preserve range grasses for the next season.

Lindsey likes the lifestyle. “I just ride my horse and have a picnic lunch every day,” she jokes.

“My family thinks I’m crazy. They quit worrying about me, I guess. It’s not for everybody. It’s a pretty tough life, really. I have 2-3 young men that help me. Between Bob being a good person to work with that has the same goals, and I’m only as good as my guys and my dog, other than that, I try to put it all together and make everything work for me.”

Stoll and Lindsey are always trying to improve the ranch for cattle and wildlife. “What’s good for the range, is good for just about everything,” Stoll says. “I particularly like to hunt birds, and it’s good habitat — good for the wildlife, the chukars, the huns and the quail. They’re like a little added whipped cream on a piece of pie here.” 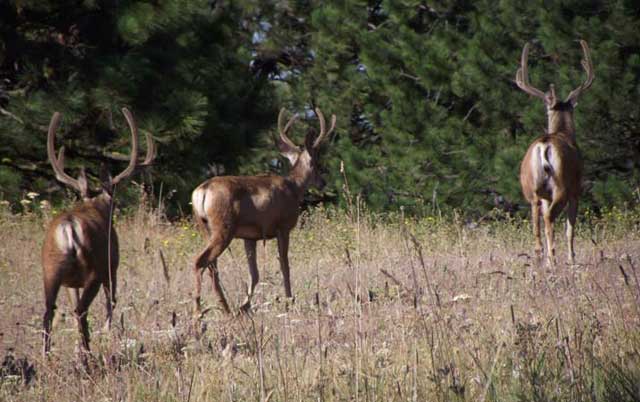 Wildlife of all kinds frequent the ranch, including black bear, elk, deer, and upland game birds. Stoll likes the fringe benefit of seeing wildlife on the ranch.

Carl Crabtree, supervisor of the Idaho County Weed Management program, says it’s great to see an investor like Robert Stoll support a well-managed ranch and also work to make it better.  “Bob sees this as an investment. He doesn’t want to let that investment degrade. He wants to improve it.”

“We used to see investors coming in as kind of a negative deal,” Crabtree explains. “A lot of times they’ll get rid of the livestock, and they let the weeds grow. And then they sell the place, and leave it in a condition that’s a lot worse than when they found it.

“I see Bob and others like him coming in as more of a positive thing. They’re injecting some cash into the area, which is good, they want to be good neighbors and good stewards. I think the ones coming in now are a good breed that will help rangelands for the future.” 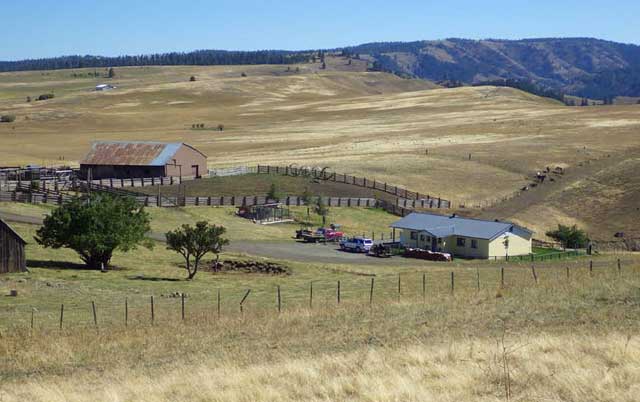 The High Range Ranch headquarters are located on the Joseph Plains, a remote but beautiful spot that’s well-suited for cattle ranching.

Stoll says he would recommend investing in ranches as a long-term venture.

“Like any investment, you have to understand the risk involved, and the costs involved,” he says. “In improving anything, it costs money. If you are looking for short-term returns, this is not the place. It’s a long-term investment. Mother Nature doesn’t work real fast. Outside of fires, it’s all a pretty slow process.”

But having an experienced ranch manager is critical, he says. “I’m real lucky. I have extremely good tenants. I gotta be honest with you, that’s the key to it. If you don’t have good tenants, it’s just not going to work.”