Idaho County is the largest county in the state of Idaho, extending from the Montana border to the east and the Oregon border, Hells Canyon, to the west. The county is truly massive — it encompasses 5.4 million acres, or 8,438 square miles, including the Salmon River canyon, three wilderness areas, and private and public lands near Riggins, Grangeville and Cottonwood. 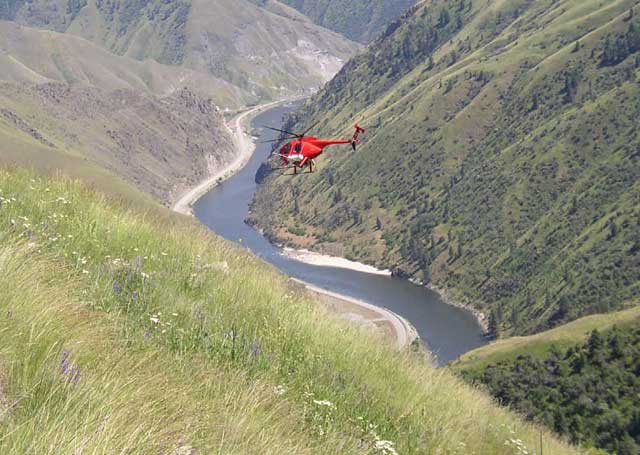 The county’s enormous size — as well as its steep, rugged mountains — presents a big challenge for the Idaho County Weed Management crew. The county also grapples with large infestations of notoriously aggressive noxious weeds such as yellow starthistle, rush skeletonweed and others.

In partnership with state and federal agencies and the University of Idaho, Idaho County uses cutting-edge technology, computer modeling, biocontrol methods and direct control to hold the line on noxious weeds as best they can. 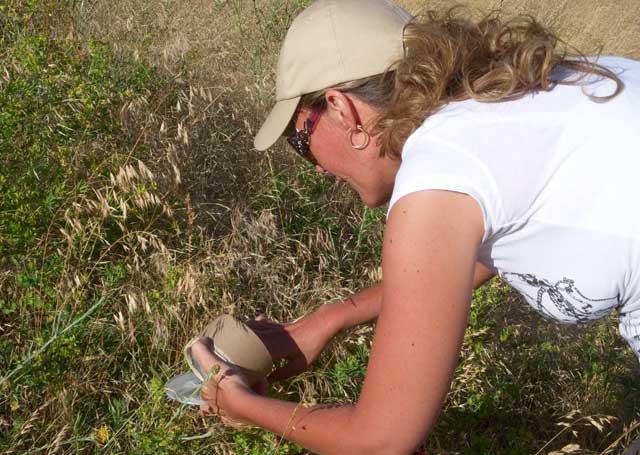 “We’ve eradicated at least half a dozen weeds from the canyon here, and we have other weeds where we’ve stopped their march, such as yellow starthistle stopping their march south, and so yes, we are winning the war on the things we plan to achieve,” said Carl Crabtree, Supervisor of the Idaho County Weed Management Program.
Overall, there are 64 species of noxious weeds in Idaho statewide. Depending on location, Idaho County battles more than half of those species every year.

The first line of defense is to kill new weeds. “When we get a new weed coming into this county, we prioritize it as No. 1,” Crabtree said. “We have a map or an inventory of that weed, and then we send the troops out to eradicate, not maim, not torment, but to eradicate, get rid of that particular plant.” 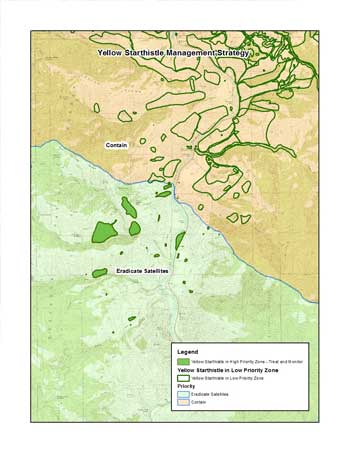 Idaho County and its weed management partners have been able to prevent yellow starthistle, a prolific noxious weed, from spreading up the Salmon River from a point north of Riggins where they established a “fireline.” Any new weeds south of the fireline are killed each year to prevent them from spreading up-river to the Frank Church-River of No Return Wilderness and the National Wild and Scenic Salmon River.

The county weed control crews log data into HP iPAQ units in the field, then transfers the data to a computerized data base, and checks those areas in the future to make sure the weed has been eliminated.

A thorough inventory is crucial for keeping track of weed infestations, Crabtree says.

“We have people who go out and start spraying, but don’t realize they’re creating a hole in a donut,” he says. “They sprayed what was in front of them, and didn’t realize like Custer that they were surrounded. We’ve found that the best tool for treatment, is to identify the target with a good inventory system.”

To obtain the best inventory, Idaho County crews go out and map the weeds in the county with the HP iPAQ units. “We get that information digitized, then we decide what we’re going to do in the way of treatment,” Crabtree says. “Sometimes we find out we’re overrun. We’ve got too much of the weed to do anything with it. It’ll have to be a custodial effort, so we use our tools based on what we’ve got in the way of inventory.”

A key example of that is how Idaho County has been preventing the spread of yellow starthistle in the Salmon River canyon. Yellow starthistle is one of the largest noxious weed problems in the county. The weed covers 53,475 acres in the Salmon River area, causing damage to private grazing lands, public rangelands and harming the economic and ecological potential of the land.

Twenty years ago, when the Salmon River Weed Management Area was established, officials identified natural geographic barriers on both sides of the Salmon River canyon where they could try to stop the advance of yellow starthistle. This location is several miles north of Riggins.

“The area to my left is Poodle Creek,” says Leon Slichter, a member of the Idaho County Weed Management crew. “Poodle was chosen to stop the advance of yellow starthistle on the west side of the river canyon. We have a north slope with a lot of timber coming into it, and very little yellow starthistle south of Poodle Creek. So south of Poodle Creek is an eradication zone. We go there three times during the growing season to make sure there’s no new seed produced that year. And we’re being very successful in that.”

The Idaho County weed crew does the same thing on the opposite side of the river in Wet Gulch. For almost 20 years now, they’ve stopped yellow starthistle from spreading up-canyon.

“That line of defense is pretty critical,” says Jeff Shinn, Salmon River District Ranger, and a member of the Salmon River Weed Management Area. “We’ve all seen what yellow starthistle has done in Hells Canyon and on the Lower Salmon River. And we don’t want it to spread upriver.”

Biocontrol methods for controlling noxious weeds are a work in progress for many species statewide.  But for Dalmatian toadflax, a stem-mining weevil is showing great results near Cottonwood. Lynn Danly, a natural resources specialist for the Bureau of Land Management, released the weevil  15 years ago in the Salmon River canyon. 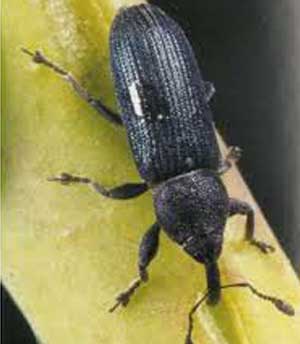 This stem-mining weevil has been very effective in killing 90 percent of the popu-lation of dalmatian toadflax, a noxious weed that grows near the Salmon River. It’s one of the few biocontrol bugs that has that high of a success rate.

“What we did here, I was putting the insects out on individual plants, wishing them well, and they become established,” Danly says. “And they’re doing what we want for this weed population here.”

Mark Schwarzlaender, an entomology professor at the University of Idaho, explains how it works. “The insect we’re excited about for Dalmatian toadflax is a stem-mining weevil. Its name is Mecinus janthinus,” Schwarzlaender says. “What the weevil does, basically, is it lays its eggs into the stem of Dalmatian toadflax, then the larvae hatch, and it causes very dramatic damage.

“If we release 200 weevils, we can expect that four  years after that release, the toadflax population will probably crash. Ninety percent of the population will get eliminated.”

“This is excellent news,” Schwarzlaender notes. “And I will, in all honesty, say that not every weed has biocontrol agents that work as successfully as this combination does.”

As a case in point, multiple biocontrol methods have been tried to combat yellow starthistle, but none of them are very effective so far.  “All of the insects combined reduce the seed head production by 75-90 percent. You would think that’s great!” he says. “And yet it doesn’t do anything.”

The problem is, the noxious plant produces more seed heads later in the growing season, after the biocontrol insects have moved on. However, there is another biocontrol agent on the horizon that could have a much greater impact. It’s a weevil that attacks the roots of Yellow starthistle, a species called Ceratapion basicorne. 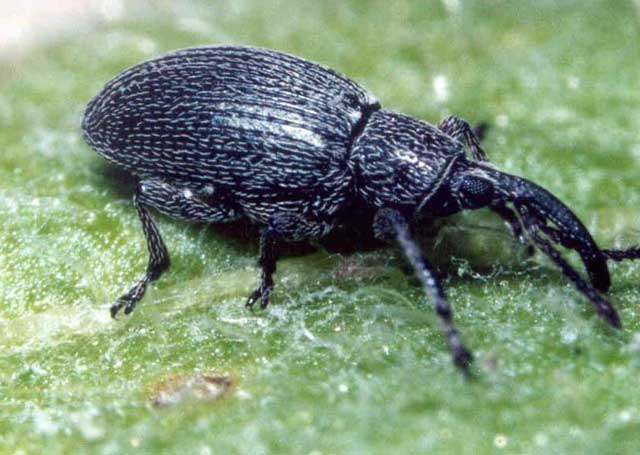 This weevil is expected to be approved in the coming years to do a better job of biocontrol on yellow starthistle.

“We really do believe that weevil will be a game-changer for the management of yellow starthistle,” Schwarzlaender says, adding that the federal government is expected to approve the use of the weevil in the next 1-2 years.

One noxious weed in Idaho County that’s very difficult to control is Rush skeletonweed. The noxious plant has been spreading throughout the state of Idaho since the 1960s, including in Idaho County. It has light seeds that are easily spread by the wind.

“That’s one in a class by itself,” says Crabtree. “With rush skeletonweed, we can kill the weed. It’s not hard to kill. The problem is, finding it, because it blows so far in the wind, and we have lots of wind, we don’t have a good strategy for containing that stuff.” 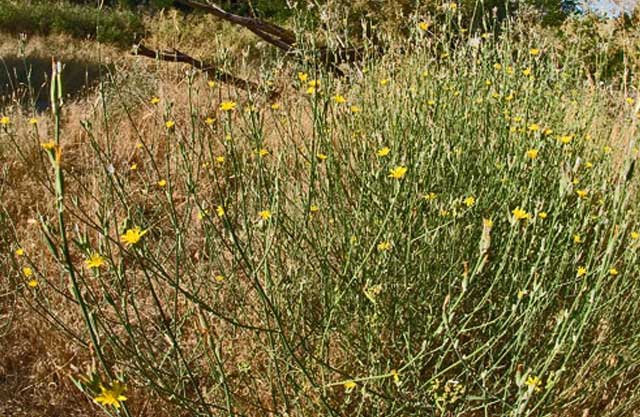 Rush skeletonweed, above, is one of the most prolific noxious weeds statewide and also in Idaho County.

However, Tim Prather, a professor of plant ecology at the University of Idaho, helps predict where the seeds of rush skeletonweed will blow with computerized wind-modeling.

“When we take a look at the country we’ve got around us, and you look at the extent of the landscape, and steepness of slopes, when you think of going out there to search for plants, it’s a pretty daunting task.” Prather says. “If you find a patch, where are those seeds going to fly to? They are light seeds, and they are going to go with the wind. 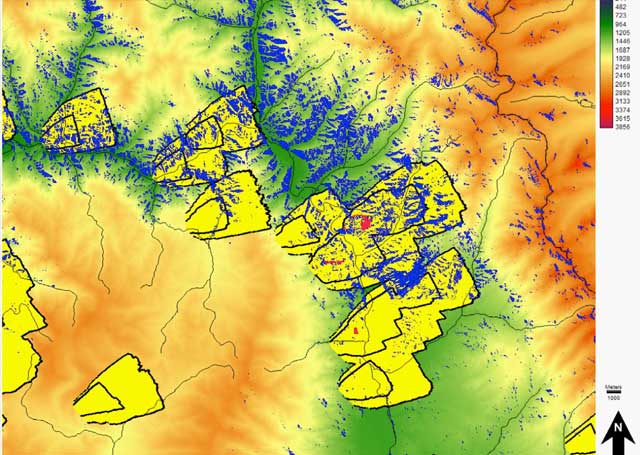 A wind-modeling map helps pinpoint where to look for new infestations of rush skeletonweed.

“So we look at this wind modeling, and we can basically tell you, based on which canyon you’re in, which direction the winds are going to go during the day. And that’s when the seeds are going to fly. So we’re able to more accurately predict where to look for this plant.”

One thing that wind modeling has shown is that even though the prevailing winds in the Salmon River canyon blow from the West, in the canyons, the local winds tend to blow south to north. “Because of the prevailing winds, we would expect the seeds to blow from the west to the east, but the wind modeling shows that the seeds generally get blown from the south to the north,” Prather says.

“Our best strategy is to maintain good, healthy landscapes, so when we get an invasion, it won’t be so severe,” he says. “We’ve got to work with this healthy landscape idea, and do better at restoration, revegetation, or maintenance of intact grasslands.” 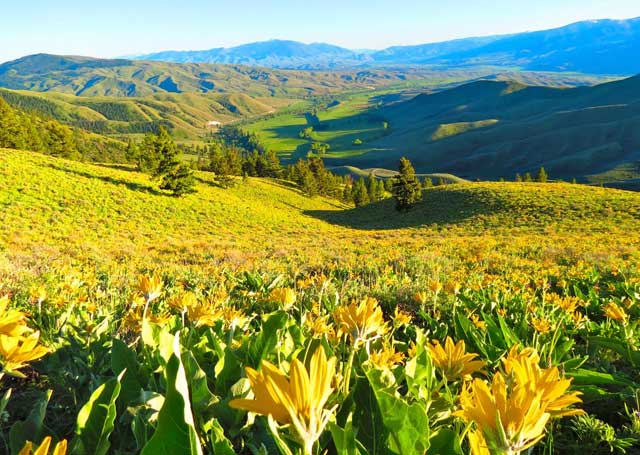 Maintaining healthy rangelands and restoring degraded rangelands are key goals in Idaho County to prevent the spread of noxious weeds.

For example, research and experience has shown that if at least 15 percent of the ground is covered with perennial plants, noxious weeds have difficulty getting a foothold. Crabtree shows an example of native grasslands high above the Salmon River. “This is an intact grassland. It has a number of perennial bunchgrasses in it, a number of forbs in here, this is quite resistant to weed invasions. We’re trying to protect it; keep it that way, so we can have some sort of a sustainable landscape for the future.”