At the top of Cold Springs summit, nearly 7,000 feet above sea level, Lucile rancher Marty Gill gets a charge out of the big view.

“From right here, you can see parts of 4 states and some huge country,” says Marty Gill, who grew up on the Gill Ranch in Lucile.

It’s an awe-inspiring spot on this high divide between Hells Canyon and the Salmon River, north of Riggins, where generations of the Gill family have raised cattle for more than 100 years.

The Gill family has deep roots. They are the longest continuous white residents of Idaho County, going back to the 1870s. 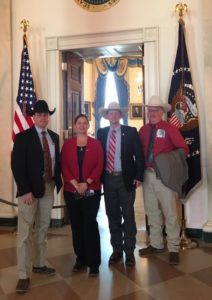 Here, in a place that feels like the top of the world, Marty Gill is standing on the pinnacle of Idaho’s livestock industry as the board president of the Idaho Cattle Association.

“It’s been a heck of a ride,” Gills says. “We had a record turnout at our mid-year meeting in Lewiston. We had a great trail ride with Governor Little. We had Vicki Christianson, the chief of the Forest Service on site in Owyhee County for 1.5 days, which is really cool. Idaho is getting a lot of input on a national level.”

“I think there are some things that are moving in the right direction for long-term resource management for everybody,” Gill continues. “The lock it up, and leave it alone, let it burn model of the last 20 years, I don’t think is a long-term sustainable deal.”

Since the 1940s, the Gill Ranch has operated on a big patch of private land above the Salmon River in Lucile, and on a large grazing allotment that runs over the mountain into the Hells Canyon National Recreation Area. 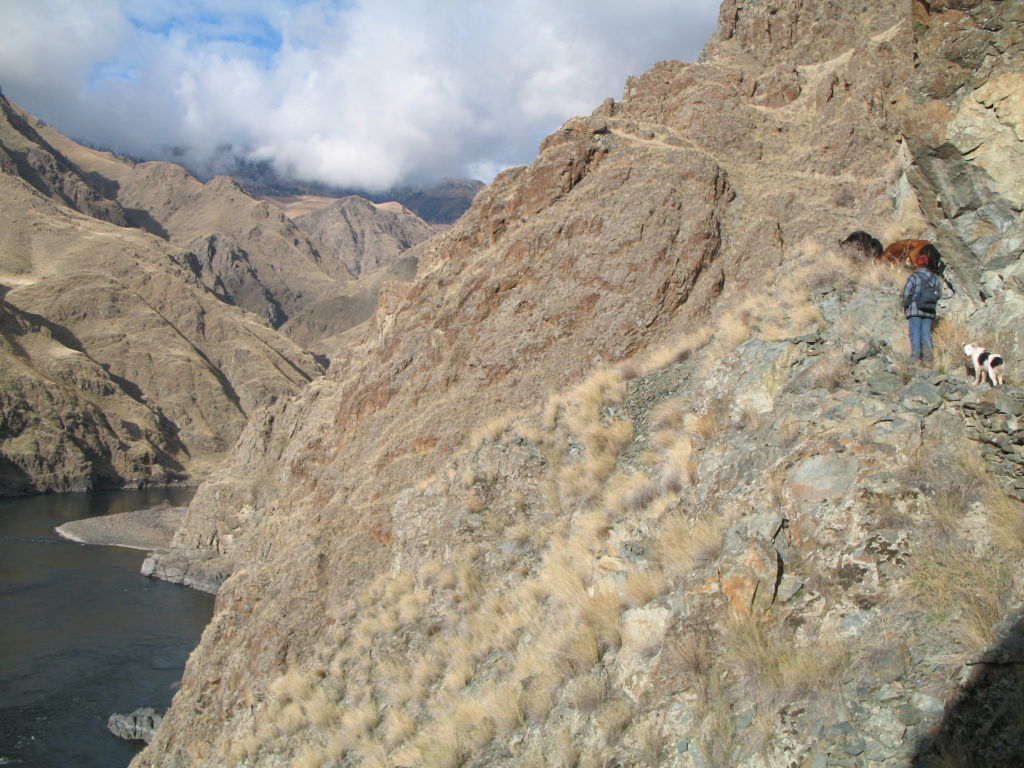 The Gills run 500 head of cattle in steep country … they joke that their cattle is equipped with low-range 4WD to handle the steep mountains.

This is mighty steep country! The Gills joke that their cattle are equipped with special built-in low-range 4-wheel-drive, or they’d fall off the mountain. “We’ve lost a couple of different bulls that fell out of the pasture right into the river,” says Melvin Gill, Marty’s dad. “You look at the pasture and yeah I can see why.”

The Gill family is well-known locally because of their deep roots. If you visit the Kirkwood Museum in Hells Canyon, you’ll learn about early Idaho County settlers. The late Governor Len B. Jordan and his wife, Grace, ran a sheep ranch at Kirkwood Creek for a decade.

Melvin Gill, now 80 years old, worked for Bud Wilson at the Kirkwood sheep ranch from the mid-1940s to 1975, when Hells Canyon National Recreation Area was created by Congress. 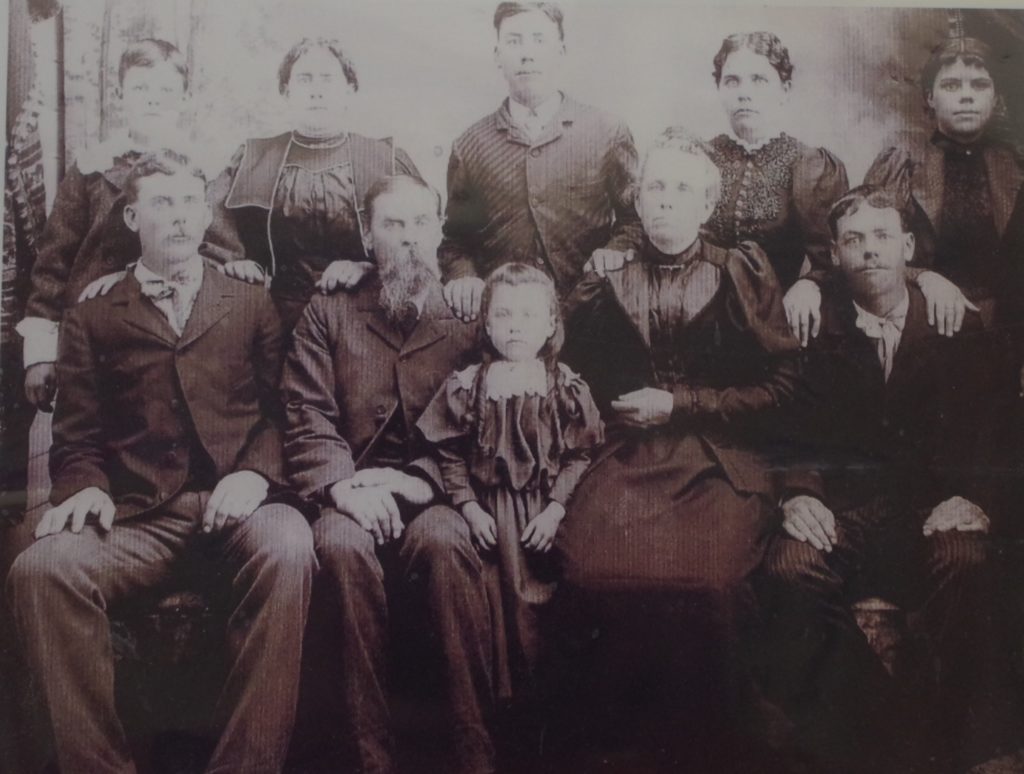 The Gill family traveled the Oregon Trail from Indiana and homesteaded in Grangeville in the late 1870s at Gill Point. The Gill family members are the longest continuous white residents of Idaho County.

“I had no time to play. Ever since I was 8 years old. I took a man’s place in the hay field, driving teams. We hayed with horses,” Melvin Gill says. “I used to think my parents were the meanest people you ever saw. Because the kids I was running around with were out swimming, or playing, and I was up here on a field on a hot day behind a team.”

Marty Gill and his sister, Shelley, are the 4th generation of the family to run the ranch. Shelley and her husband, Garrett, raise about 500 cattle at the Gill Ranch in Lucile. Marty works as a nutrition expert for Agri-Beef/Performix Nutrition in Fruitland, while running a second ranch in Parma for the family.

Beef cattle from the Gill Ranch are marketed as part of the Double R Ranch brand in grocery stores through Agri Beef.

In fact, if you shop for a steak at  Albertson’s, the Gill family’s cattle is marketed as part of the Double-R Brand. You might see a family photo in the grocery store.

“Most times our cattle will grade 85% – 88% choice, that’s the target market in trying to sell good product because you get paid a premium for that,” Marty says. 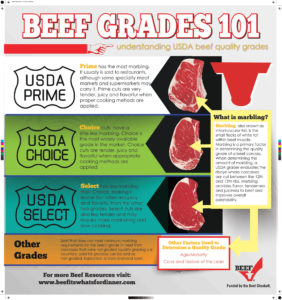 Marty Gill is a man on the move. He works a 4-state territory for Performix Nutrition, helping cattle ranchers increase protein and minerals for their livestock. He’ll take samples of their pasture grass and hay and provide an analysis.

“We’ll take what you have in your feeds, what type of animals you have, what kind of production you’re getting, identify the deficiencies, we’ll take what you got vs. what’s optimal for the animal, and this is like a great big kitchen, we put the stuff together in terms of a supplement,” Gill says.

Marty Gill applies his knowledge about cattle feed and nutrition to the family’s cattle operation as well. Today, he’s providing nutritional supplements for some replacement heifers at the Parma Ranch. These cows will be raising calves for the first time next year. 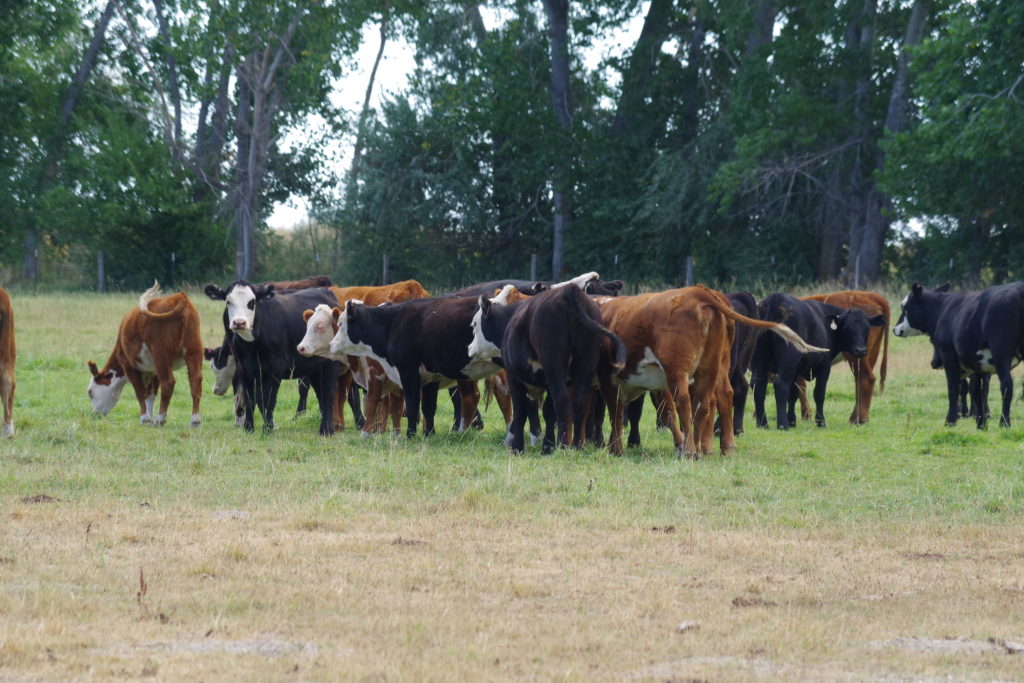 Cattle from the Gill Ranch in Lucile feed in a flatter pasture at their Parma ranch prior to be shipped to a feedlot for finishing.

“Those of us in the commercial industry are trying to raise the most efficient animal that we can,” he says. “Take this grass and turn it into delicious protein with minerals that humans can use. So you look at traits like growth rate, pregnancy rates, fertility and more.”

The Gills also select characteristics in the breeding process to produce a slightly smaller animal that can handle the steep-faced mountain country next to the Salmon River and Hells Canyon.

While many Idaho ranchers sell their calves in the fall to the beef market, the Gills hang onto their cattle until they grow into yearlings, while feeding them a mix of hay, grain and minerals until harvest time.

“This group is weighing 850-870 pounds so we’ll be looking to market them in the next several weeks to a feedlot,” Marty says at the Parma ranch. “They’ll put them on feed for 120-140 days, and these cows will be harvested in January 2020 to go into the beef chain weighing 1,300 pounds, and hopefully, close to 90 percent will grade choice and produce some really great steaks.”

The Gill Ranch in Lucile

Melvin Gill used to love herding cattle on horseback as a kid on the family ranch. “I loved horses, cows and dogs. That was my highlight. I just enjoyed it,” Melvin says. 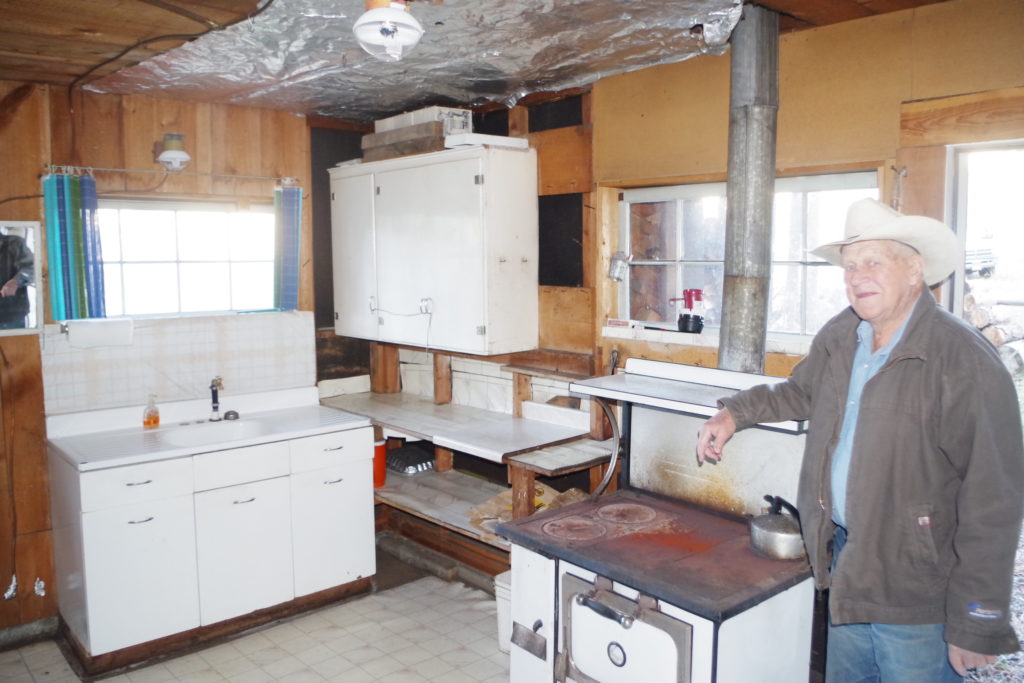 Melvin Gill at the family’s cow camp high in the mountains above the Salmon River and Hells Canyon.

Melvin Gill used to ride horseback to the Cow Creek school down the road. He learned how to break horses and shoe horses from his dad.

Melvin and his wife, Midge, had two children, Shelley and Marty. His daughter loved to ride horses and always wanted to tag along  with her dad. “She always had her own horse to ride, when she was a little itty bitty girl, it didn’t matter if it was storming or cold or whatever, she had to go with me, all the time,” Melvin recalls.

“I tried my hardest to be as good as I could be so that I could get to go,” Shelley adds.

“So it doesn’t surprise me when she calls me up from college and says she’s coming back to help me. I’m sure glad she’s here too,” Melvin says. 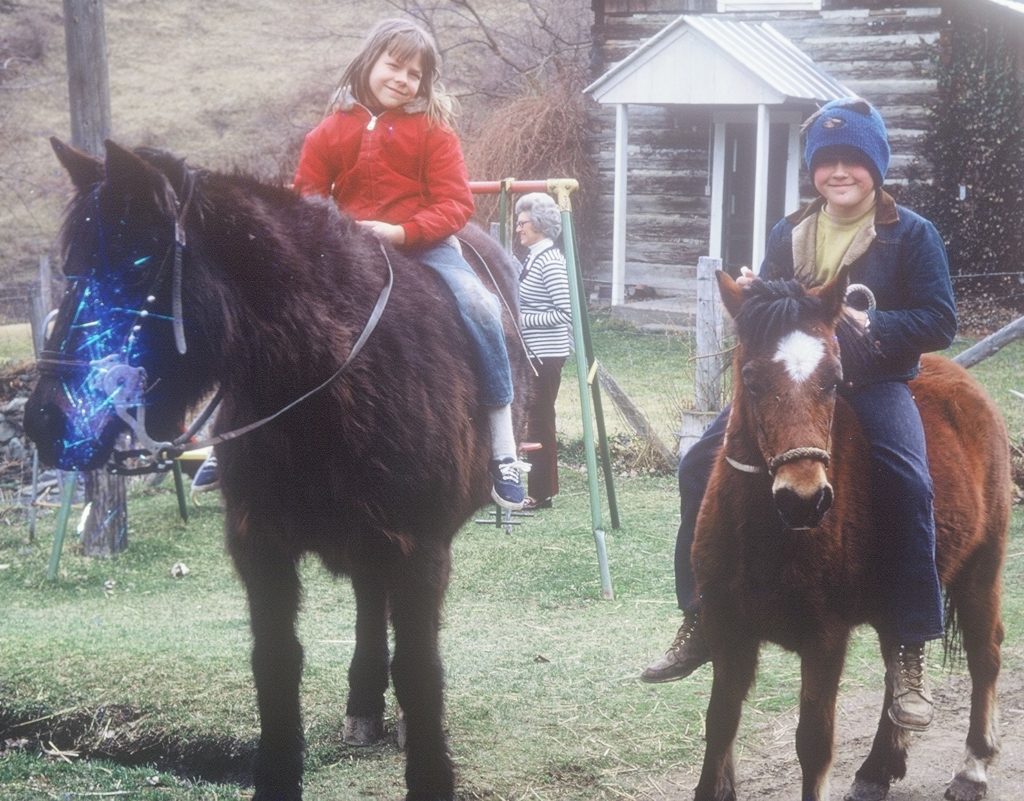 Shelley and Marty on horseback when they were kids.

Up on the mountain, at the Gill Ranch cow camp, Shelley talks about running the ranch. “It’s a huge allotment, there’s almost 30,000 acres,” she points out. “It’s a lot to cover. We’ve had a lot of forest fires that make it hard to get around. A lot of changes. We’ve got a lot more hunters and recreationists to deal with, we’ve got wolves to deal with, a lot of different dynamics that have changed over the years.”

In general, the Gills’ cattle herd follows the green up on the Salmon River side of the mountain, and spends six months on the forest allotment from June through November.

“Just follow the grass, that’s why a lot of ranches have a low-country and a high country,” Shelley says. 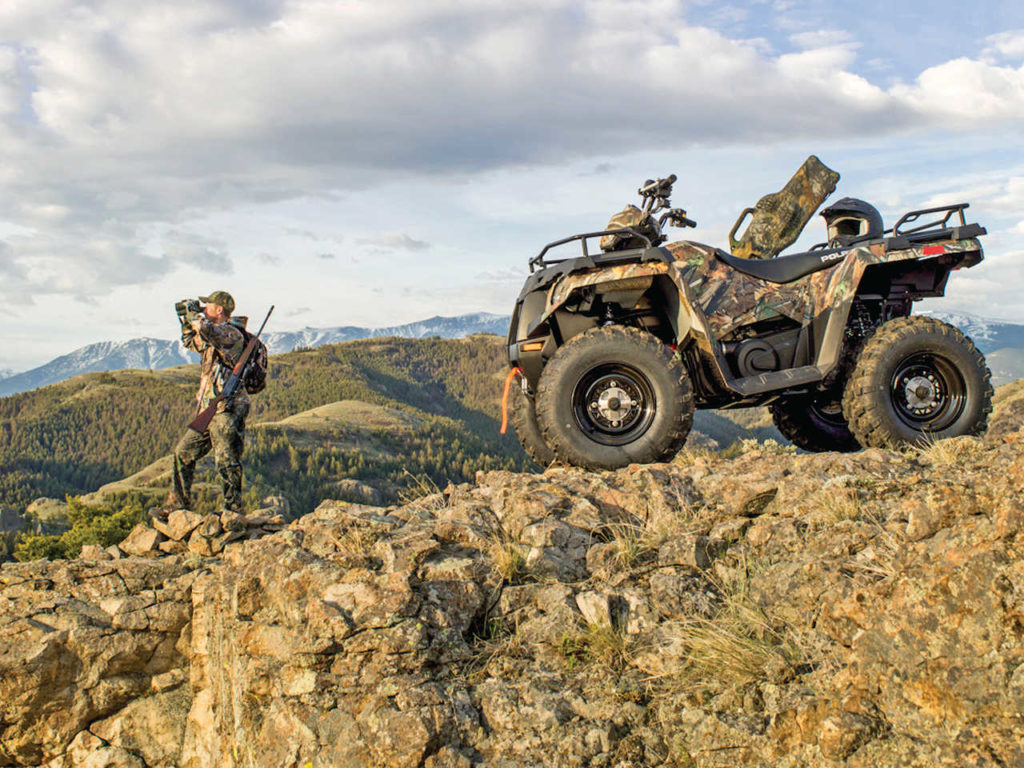 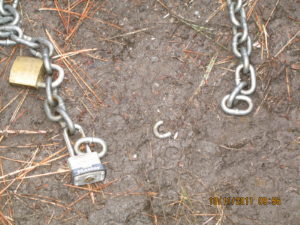 The Gills have to patrol their fences and gates because hunters cut the locks or the barbed wire when pursuing game.

With hunting season coming up, Neal braces for the impact. “Since the wolves have really hit the Lochsa and Selway country, we have a lot more hunters coming down here.”

Frequently, hunters don’t respect the difference between private and public lands, she said. “What we find is they cut the deeded fence if the gate’s locked, and just go through. I think it’s more about getting the big antlers that they see over the fence. They don’t respect the private ground.”

The Forest Service doesn’t do much maintenance on their lands, Neal says, which hurts their ability to manage cattle. “They don’t do the trailwork, recreation signage is falling down, road signage, just a lot of neglect. Trees are dying. Weeds are coming. Weeds have been a big thing. Weeds in the Hells Canyon NRA side, it’s gotten out of hand.” 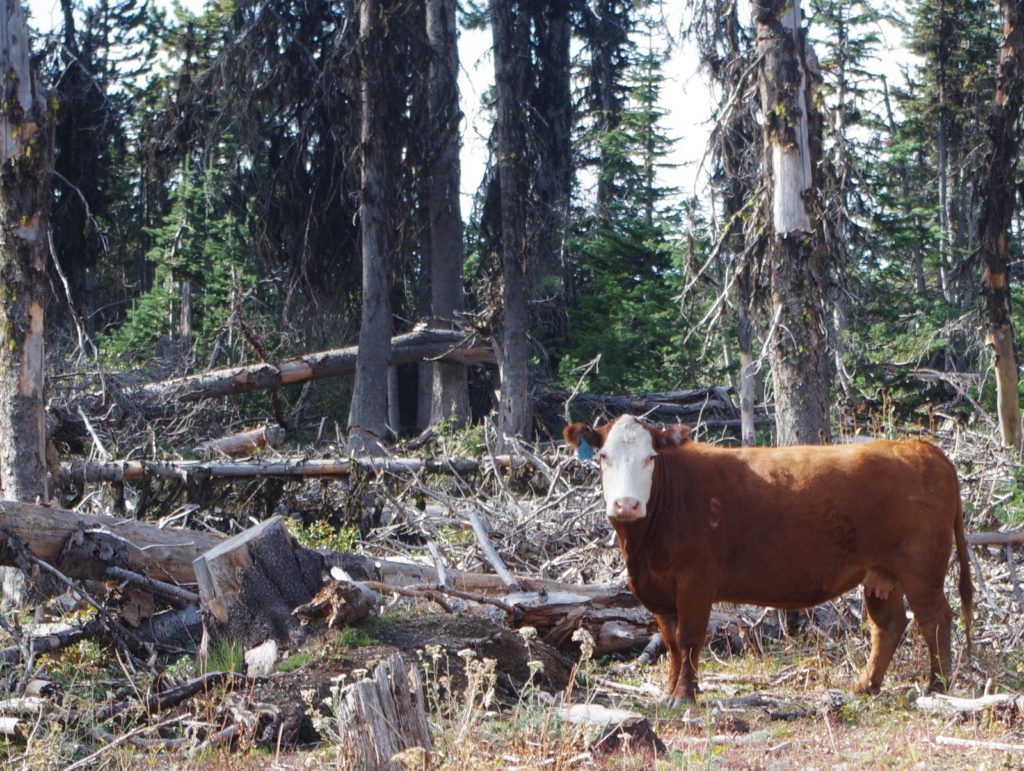 National forest lands and trails can be choked with downfall, making it difficult for the Gills to manage their cattle.

Despite all of the challenges associated with managing the ranch, Neal enjoys it.

“I think it’s a great lifestyle,” she says. “I like the independence, getting up in the morning, doing what you want for the day, no bosses. We work really hard, always have, and that’s the way I like it.”

Melvin and Midge mainly hang out at their lovely home overlooking the Salmon River country, enjoying retirement. And Marty is sprinting to the finish of his service as ICA board president, pushing the issues of the day. 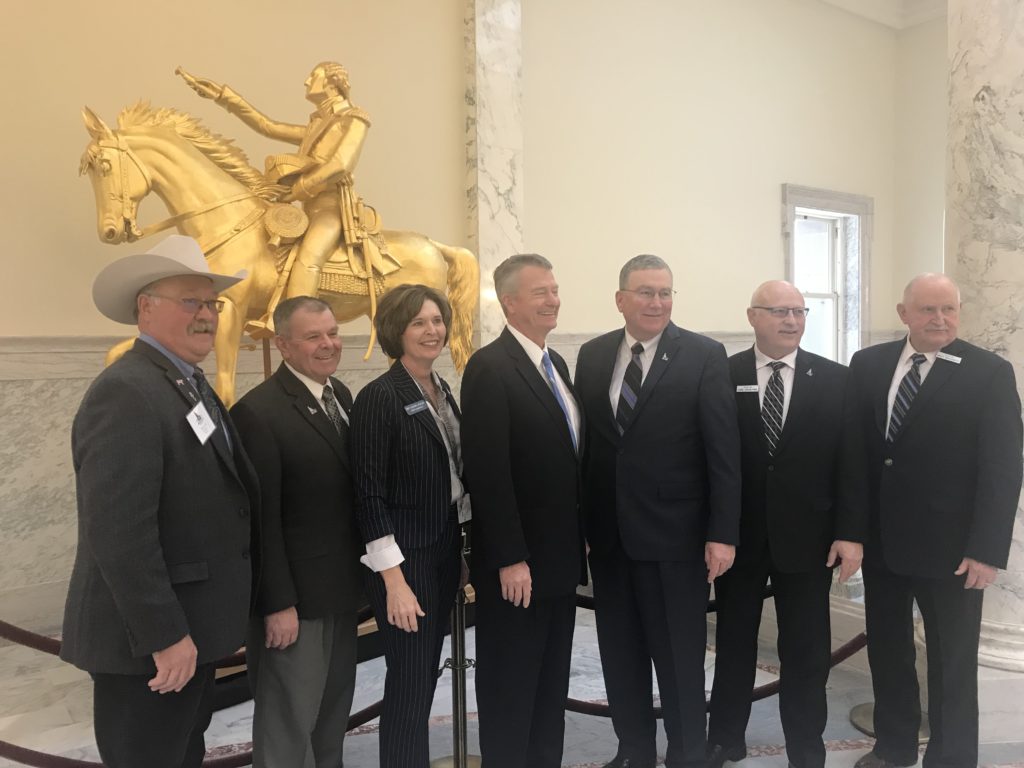 As ICA president, Marty worked to expand the network with ranching leaders in the West.

“Let’s bring the best science and best methods to the table that work for society. I think there’s something to be learned by looking at the big-picture view and bring some of those things together.”