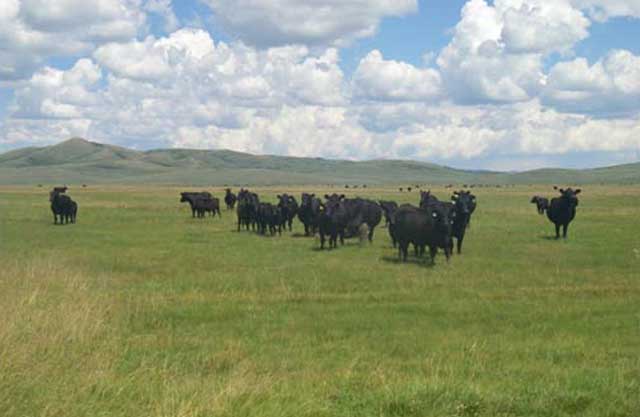 The Eastern Idaho Grazing Association grazes cattle and sheep on 90,000 acres in the Blackfoot Mountains of Eastern Idaho.

In the broad, sweeping valleys under the shadow of the Blackfoot Mountains in Eastern Idaho, sheep and cattle graze on lush grazing lands where trappers and explorers once found plentiful game and herds of buffalo.

“This is a beautiful place in the world, and we certainly try to take care of it,” says Ken Wixom, a cattle and sheep rancher who is the president of the Eastern Idaho Grazing Association. “This is where the big game herds were, the big horn sheep and the buffalo. This is where the early trappers came to hunt.”

The same virtues that drew game herds to the area are paying dividends for the Eastern Idaho Grazing Association, a group of about 40 family cattle and sheep ranchers who collectively manage 90,000 acres of land in the area. The families run a total of approximately  6,000 head of cattle and 10,000 head of sheep in the rolling, grassy hills between Blackfoot, Idaho, and Blackfoot Reservoir, during the summer months. 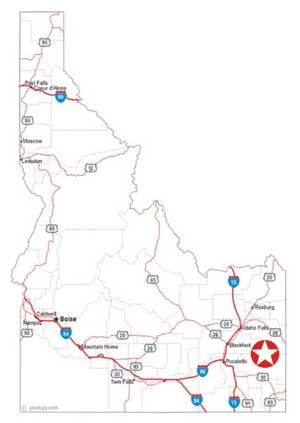 As time went on, grazing management improved and life was good. Nowadays, the grazing association pays great attention to range stewardship, using rest-rotation and deferred-rotation principles on its own grazing land and on Idaho State Endowment Land grazing leases, along with water developments and fencing. The attention to detail, combined with favorable weather — snowy winters and wet springs —  have improved the range, Wixom says.

About half of the association’s grazing land is comprised of state land grazing leases on 45,000 acres. Heath Hancock, a Resource Supervisor for the Idaho Department of Lands in Eastern Idaho, says the Eastern Idaho Grazing Association is an excellent lessee. 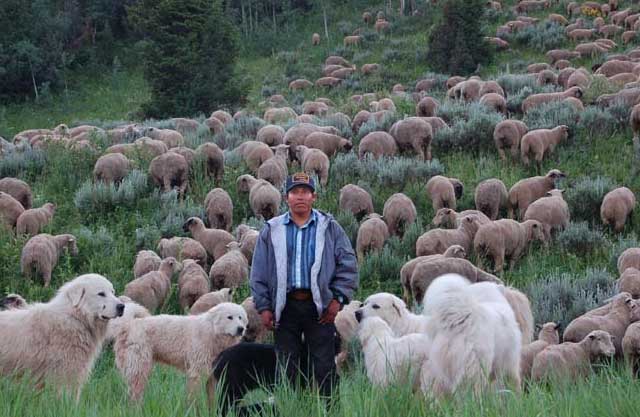 By running cattle and sheep on association grazing lands, ranchers can maximize the utlization of the range because cattle are mostly grass eaters.

“This is truthfully some of the best rangeland in Idaho and anywhere in the West,” Hancock says. “We have deferred rotation grazing systems in place across the range, which allows for rest during the growing season, and that’s crucial for upland and riparian communities. We do cooperative water developments, fencing, all types of things that increase the carrying capacity of the land and maximize revenue, so they’ve been a very good partner.”

The Eastern Idaho Grazing Association is approved to consume about 18,000 animal unit months (AUMs) of forage on state lands, contributing $92,622 in grazing fees to the state endowment fund, which goes to public schools. State grazing fees were $5.13 in 2011.

A unique aspect of the grazing association is that the ranching families run sheep and cattle on the same range. Even though sheep and cattle ranchers used to fight over grazing territory a century ago, ranchers in the Eastern Idaho Grazing Association say it’s beneficial to run both types of animals on the land. 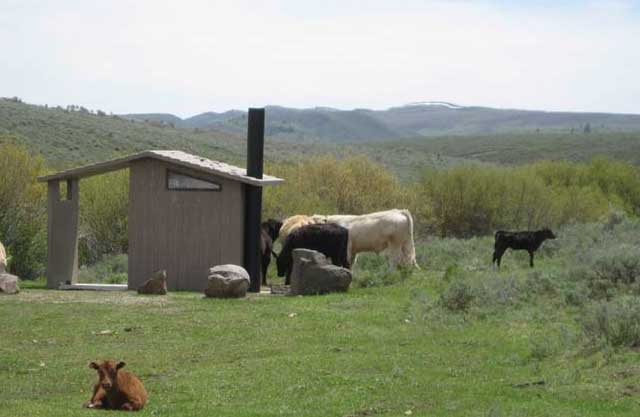 A new BLM fencing project keeps cows out of the recreation area, and an associated water development pipes water uphill so cattle can drink.

“Cattle are grass eaters mostly, and the sheep are browse eaters mostly,” says Tom Rich, owner of Rich Livestock Company and a grazing association director. “The sheep tend to stay high, and the cattle are down low, so you’re utilizing the whole range.”

“Both the sheep and the cattle get along super,” Rich continues, noting that Peruvian herders keep the sheep moving across the range and association ranchers keep close watch on their cattle. “It’s just amazing. We have our problems and issues, but they’re very minor in the whole scheme of things.  Everybody respects everybody else.”

The Bureau of Land Management manages about 5,000 acres of land along the Blackfoot River. The grazing association has been grazing in that area for nearly a century, but in more recent times, the BLM set up campgrounds and fishing access for the general public along the river. Over time, that has led to conflicts and complaints from recreationists about cattle intruding on recreation areas.

It’s a good idea to carve out space for recreationists and anglers along the Blackfoot River because those activities are getting more popular all the time, says rancher Rich Reid. Above, a water tank and water pipe await hook up to complete the project.

The BLM proposed a fix, in which the cattle would be fenced off from the Blackfoot River riparian area, and new water developments would pump water to cattle tanks several hundred feet above the river. The agency spent about $200,000 putting the cooperative project together , including $75,000 from the Idaho Department of Environmental Quality for fencing and water project materials, and federal funds for cattle guards, water troughs, power generators and more. Ranchers will shoulder the cost of pumping the water uphill to cattle troughs on an ongoing basis.

“We’re protecting the river from concentrated livestock use while improving the river bank and reducing the impact of cattle on recreationists,” says David Pacioretti, Field Manager of the BLM Pocatello Field Office.

Rich Reid, owner of the TF Ranch and an association director, said it took the association a while to warm up to the BLM’s proposal. Ranchers didn’t like losing rangeland on which to graze cattle.

“Change is tough, but I think it’s probably a good thing,” Reid said with a wry grin. “We lost 1,300 acres of grazing ground, so it’s kind of tough to have it taken away. Getting mad at the fisherman and recreationists doesn’t do you any good. There’s going to be more and more of them, so it’s their place too. We’re going to get some water developments off-site, so I guess we’ll be all right. You gotta change. You might as well get used to it.”

New fences placed more than 200 feet above the river for several miles will keep livestock away from the Blackfoot River, campers and anglers. “I just wasn’t the best set up,” Pacioretti says. “We wanted to create a place for people to tent camp and not have a conflict with livestock.”

The fencing project may improve streambank vegetation and create more shade along the banks for fish habitat, BLM officials said. The Blackfoot River is used primarily for irrigation by the Shoshone-Bannock Tribe, so there are no guarantees about any minimum flows for fish, officials said. 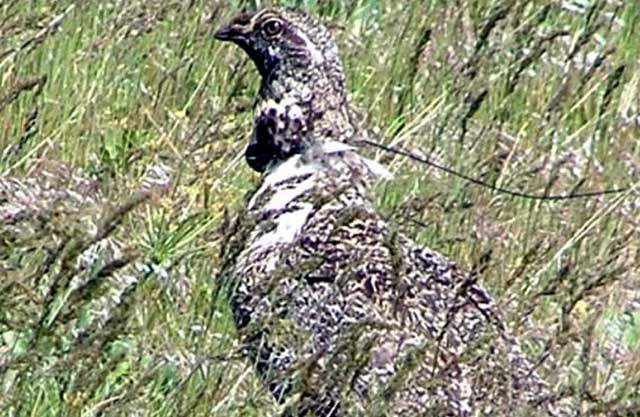 Water developments are commonly used on grazing association lands. They have developed numerous watering holes for cattle and sheep, as well as 9 wells, along with pumps, generators and watering troughs, to keep cattle dispersed throughout the range. Gary Pratt of Pratt Livestock explains how it works by the Paradise grazing allotment. A well was drilled to fill two large cattle tanks with water on an ongoing basis, he says. Each tank holds about 8,000 gallons of water. A generator runs 24 hours a day to keep the water flowing. A gravity-flow pipe carries the water to cattle water troughs down-slope.

Ranchers graze cattle in three different pastures in the vicinity. “We keep them rotated around in the three pastures so we keep the grass growing and don’t overuse it,” he says.  Resting the pastures “gives the grass time to come back. This year has just been excellent. The cattle come out of here, then it went to raining again, the ground is wet today … it’s really a beautiful year.” 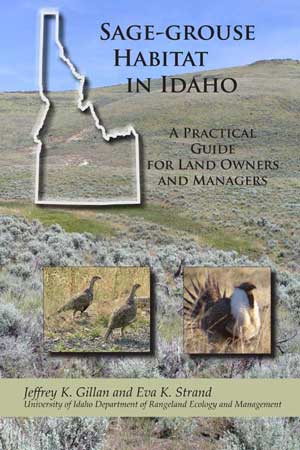 Rancher Wendy Pratt recommends this handy guide for learning about what kind of habitat sage-grouse need to co-exist with livestock grazing.

Wendy Pratt, the grazing assocation’s secretary who runs Pratt Livestock with her husband Gary, has been engaged in the sage-grouse issue to keep association directors apprised of discussions with state and federal agencies. She sits on the Eastern Idaho Local Working Group and she’s a member of the Idaho Statewide Sage-Grouse Advisory Committee.  Sage-grouse numbers have been declining overall  in the Intermountain West, and several environmental groups have petitioned the species for listing as an endangered species. So far, the federal government has declined to list the species, saying other species take higher priority.

Little is known about sage-grouse populations in the Blackfoot Mountains, Wendy Pratt said, because the area is snow-bound during the springtime, when sage-grouse are mating on leks and are easiest to count. The Idaho Department of Fish and Game has taken aerial surveys to begin laying a baseline for local sage-grouse populations. No matter what they find, it’s good for ranchers to stay informed, she says.

“Probably the best thing that’s happening right now is a conversation between the ranchers and the biologists with Fish and Game about what do sage grouse need? What are their habitat requirements?” she says. “It’s mostly an awareness — trying to get the ranchers to see this range not as just grass for cows but a diversity of plants that serve all of the critters and wildlife.”

It helps sage-grouse to leave a cushion of grass under sage brush plants in the fall, so sage-grouse will have a place to nest and lay eggs in protected cover, Pratt notes. Sage-grouse feed on sagebrush in the winter, and in the summer, they like to eat forbs and wildflowers. “With those things in mind, we just begin this process of doing a better job of meeting their needs,” she says.

“Sage grouse need huge expanses of sagebrush country. This is perfect habitat for sage grouse, and it’s perfect for livestock. We know they can co-exist. They have for a long time.”

Pratt recommends a handy guide published by the University of Idaho that provides useful information for ranchers about sage-grouse habitat needs. The Idaho Rangeland Resource Commission has been  involved in developing the guide and educating the public and ranchers about the issue. 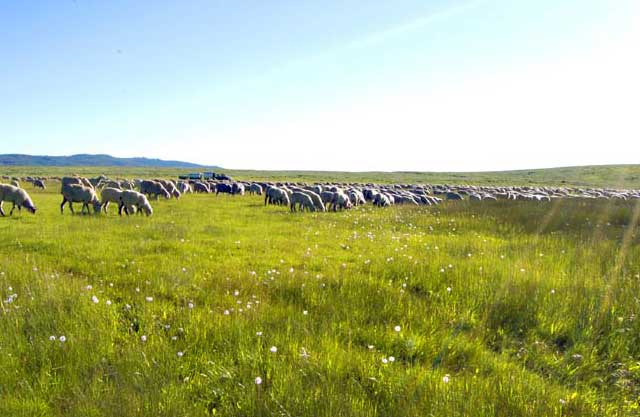 Sheep graze on spring browse on their way to the high country in May.

In the meantime, Ken Wixom says the Eastern Idaho Grazing Association’s attention to good grazing management and land stewardship not only will help sage-grouse but it also leads to more feed for livestock, improved weight gains for cattle and sheep, and ultimately, more income for ranchers.

“We’re producing more feed now than we ever have in our history,” Wixom says. “Our calves are coming off the range 200 pounds bigger than they used to be, and lambs have gone up from 80 pounds to 120 pounds, so the size of the livestock is great. Cattle prices are tremendous right now, and lambs are at historical highs, so the livestock industry looks really good for the next several years — very positive.

“We feel we’ve been very progressive. We’ve considered the wildlife — what’s going on with the birds and the deer and the elk, taking good care of the ground, but making good lambs and calves is very important to keeping us in business.”