A free-span bridge, above, allows Iron Creek to flow freely after an old culvert, right, was eliminated as part of the Iron Creek fish restoration project.

Jan Phillips and her late husband, Clyde, worked day and night in the summer of 2007 to convert their flood irrigation system to pivots and remove a century-old barrier to spawning salmon on Iron Creek. “It was daylight to dark for months, literally working in the trenches,” she says.

But the project had almost instantaneous results.

“The next year, we came over to here by Iron Creek, and there were salmon spawning in the creek,” Phillips said, her eyes sparkling with the excitement of the moment. “They flipped their fins all over the place and made this horseshoe-shaped place to lay their eggs. It was really fun to watch.”

“We were excited that we’d be able to make a difference and bring the fish back,” says Phillips, who runs the Iron Creek Angus Ranch on the banks of the Salmon River near Salmon.

Jan Phillips is one of more than 75 ranchers in the Upper Salmon River Basin who are participating in efforts to restore fish habitat for endangered salmon, steelhead and resident trout. The Upper Salmon  Basin Watershed Program has completed more than 120 projects overall since the early 1990s. The Iron Creek restoration project is one of the largest restoration projects ever undertaken by the watershed program in the basin, involving more than 11  local, state and federal agencies.

The $500,000+ project was accomplished through  grants from several agencies, including the Pacific Coastal Salmon Recovery Fund (NOAA), USDA Natural Resource Conservation Service (NRCS) and the Idaho Water Resources  Board (water transactions??). The Phillips contributed more than 2,500 hours of in-kind labor and financial support.

Another phase of the project was completed in 2010 with a free-span bridge being built over Iron Creek in a cooperative effort between the watershed program and Lemhi County Road and Bridge Department.

“The bridge replaced an old culvert that prevented fish from making their way further into the cool, clean water of Iron Creek,” says Hans Koenig, project coordinator for the Upper Salmon Basin Watershed Program , which is overseen by the Governor’s Office of Species Conservation. “The results of this entire project were incredible. Within one year, the chinook realized the passage was open and they began to spawn in Iron Creek.” 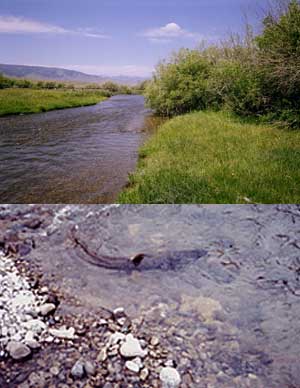 Healthy riparian areas create good fish spawning habitat on the Lemhi River (top). Much of the spawn-ing habitat in the Upper Salmon Basin lies on private ranch land, so it requires the cooperation of ranchers to improve habitat.

The Phillips received the 2009 Governor’s Award for Excellence in Agriculture for Environmental Stewardship for their work on the Iron Creek restoration project.

The project has had multiple benefits. By converting to sprinkler irrigation, the Phillips have more water in late summer. “We’ve been able to focus on other aspects of the ranch because irrigating is so much easier than it used to be,” Phillips says. “We’re getting a higher yield on our hay, and that’s a big plus.”

Initially, the projects were focused on the Lemhi River Basin between Salmon and Leadore. Nowadays, the project covers the Sawtooth Valley, Stanley Basin, East Fork Salmon River Valley, Pahsimeroi River Valley, Panther Creek and the main fork of the Salmon River. Federal fish-restoration money from the Bonneville Power Administration (BPA) and the National Marine Fisheries Service (NMFS), agricultural assistance funds from the Natural Resources Conservation Service (NRCS), and funds from other agencies are used to pay for projects.

Upper Salmon Basin ranchers decided long ago that they will work on improving fish habitat even though the 8-dam and reservoir hydroelectric complex on the lower Snake and Columbia Rivers wipes out a lot of fish, as do other activities such as tribal fishing and commercial fishing. Often times, ocean conditions, winter snowpack and stream flows determine how fish populations fare year to year.

“You know, we can’t control that stuff,” Olson says. “As ranchers, all we can do is make the habitat the best we can. ” 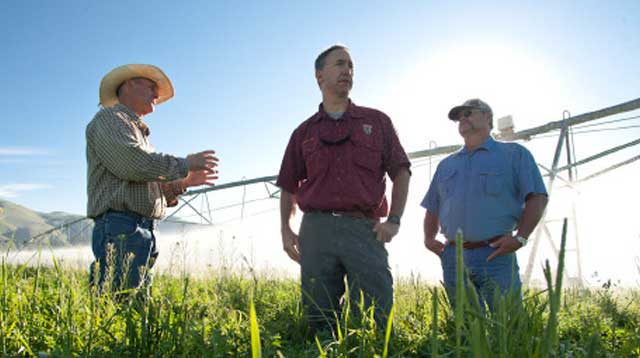 Leadore Rancher Merrill Beyeler talks with agency officials after installing a pivot sprinkler on his ranch. Beyeler has converted to sprinkler irrigation to leave more water in the river and tributary streams for fish. (Photo by Mark Gamba)

Merrill Beyeler of Leadore is a can-do rancher who has participated in a number of fish-enhancement projects. Like Olson, he  decided to jump on board early-on because he likes to fish.

“I like to fish, and I have a grandson who loves to fish … these are important values you can’t put a price tag on,” he says.

Beyeler recently completed a deal with the Nature Conservancy that protects 2,400 acres of salmon and wildlife habitat, removes fish-passage barriers on three tributary streams and expands the Beyeler’s ranch.

The deal has the additional benefit of allowing Beyeler’s three grown sons, Bryant, Curtis and Doug, to continue to work full-time on the family ranch and raise their families in rural Leadore, Idaho, where Merrill graduated from high school and later taught school and coached sports for many years.

Beyeler likes to fish with his grandsons. “These are important values you can’t put a price tag on,” he says. (Photo by Mark Gamba)

“One of the things with rural communities is trying to maintain them and trying to bring children back into the valley to maintain the vitality of it, and that has been a challenge,” he says. “This is a way we can maintain this rural setting and keep the family here and make the valley more viable for people to live here year-round and make it a community.”

Beyeler notes that he’s watched a number of farms and ranches disappear during his lifetime, and he wanted to do his part to reverse that trend, at least in his family. “You know, I drive up and down this valley a lot, and you do stupid things, like counting houses, or magpies,” he says with a laugh. “And I noticed that the farms and ranches were disappearing. This is a deal that will be good for the environment, and good for the future of the agricultural community.” 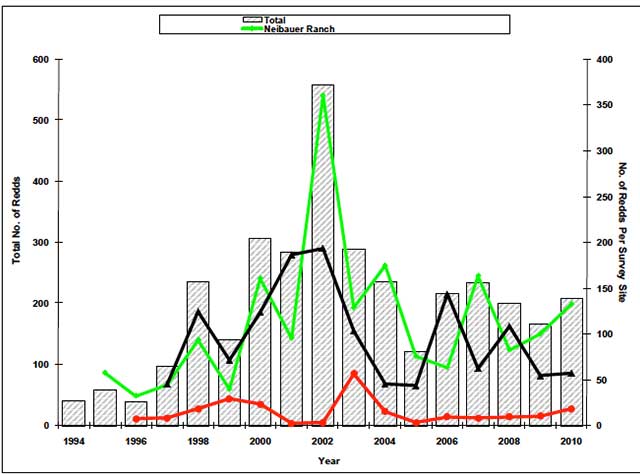 Rainbow trout spawning counts (IDFG) show the progress being made in the Upper Salmon River Basin since the early 1990s.

The Beyelers shifted from flood to sprinkler irrigation on three creeks on their home ranch to restore fish passage, while increasing water efficiency and increasing yields on their hay crops. When the pumps turn off, the water stays in the creeks or the Lemhi River, adding to surface water flows. Beyeler has participated in numerous projects in the basin, including one of the first riparian fencing projects. “As I look back at all of the projects that have gone in, not one is a silver bullet, but there is a cumulative effect,” he says. “And you have all of these other values that you pick up along the way.” 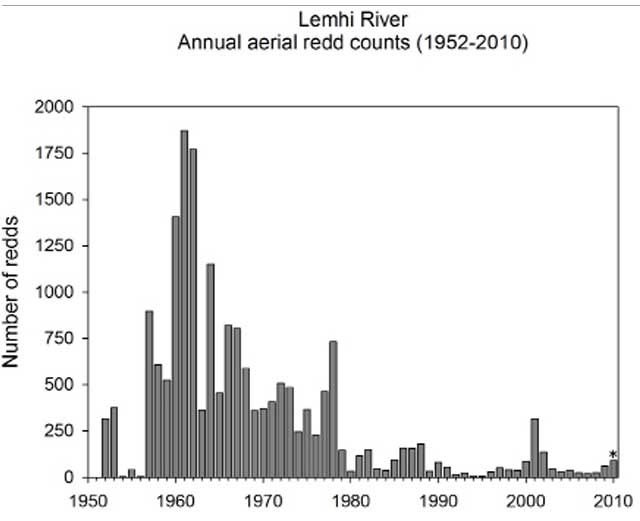 Redd counts for endangered salmon on the Lemhi River show progress since the counts fell into the single digits in the mid-1990s. Many other factors affect survival rates for the ocean-going fish, including federal dams and reservoirs on the lower Snake and Columbia Rivers, ocean conditions and commerical and tribal fishing.

In the first year that Iron Creek flowed freely again, a number of Chinook salmon returned to spawn  and 57 steelhead (50 hatchery and 7 natural) were  observed at the fish weir. “Iron Creek is expected to serve as a template or model for future projects,” Koenig says.

“We’ve come such a long way,” says Jude Trapani, a senior fish biologist for the Bureau of Land Management in Salmon who has been involved in the watershed project since the beginning. “The trick is avoiding the conflict between irrigated agriculture and fish. We know when the critical times are for sufficient water flows and where the best fish spawning habitat is, and we work together with the landowners to marry the two together.”

The key all along has been working together with ranchers to find solutions without impacting their ability to irrigate fields and make a living. “It’s a much more collaborative approach,” Trapani says. “Instead of using the big hammer of the ESA (Endangered Species Act) and saying “You guys are done!” We work on solutions together.”

Beyeler is always thinking about ways to do things better, Trapani says. “He knows what’s good for his ranch and what’s good for fish. He comes up with the ideas even before we do.”

Ranchers on the lower Lemhi River, however, like Olson and Bruce Mulkey, don’t necessarily like to see more sprinkler pivot projects occurring in the valley because that could affect surface water irrigators downriver. The Lemhi River has been sub-irrigated by ranchers for decades, which elevates the ground water table, keeps the valley fertile, and keeps the water cool as it is released slowly back into the river. 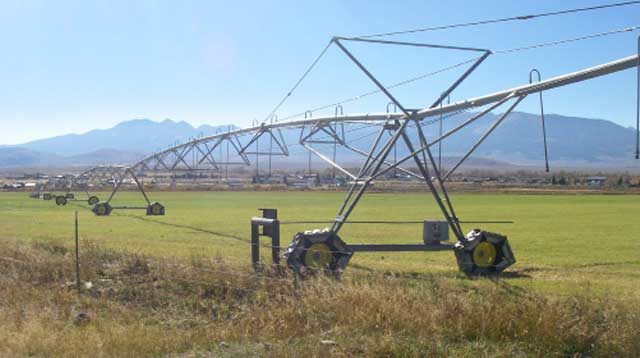 Converting to sprinkler irrigation can be good for fish but ranchers in the lower Lemhi River worry that a reduction in flood irrigation may affect the ground-water aquifer in the lower valley. Studies are under way to evaluate the impacts.

“The pivot projects are a good deal for the landowner who puts them in, but I’m not sure about his neighbor,” Mulkey  says. “We need to study it more and see how it will affect re-charge.”

A ground water study is under way to learn more about the hydrology of the groundwater aquifers in  the Lemhi Basin. Even so, Mulkey isn’t worried about getting dried up on his ranch.

“If it affects me, the whole river is going to dry up because I’ve got some of the oldest water rights on the river,” he says with a grin.

Looking to the future, Don Olson looks forward to more progress.  “It’ll keep progressing,” he says. “We’ve done most of the easy stuff, though. Down the road, the projects are going to be more complicated, they’ll take a lot more money and a lot more time.”

For more information, contact the Upper Salmon Basin Watershed Program at 208-756-6322 or go to their web site, www.modelwatershed.org.