Rancher Jim Martiny remembers his grandmother talking about the loud noise made by salmon spawning in the creek next to their ranch. Legend had it that Native Americans had speared salmon in the area as well. Clearly, Big Springs Creek had a strong history of supporting strong fish populations.

“She said it sounded like horses crossing the creek, there were so many of them,” said Jim Martiny, a fourth-generation rancher in the Pahsimeroi Valley. 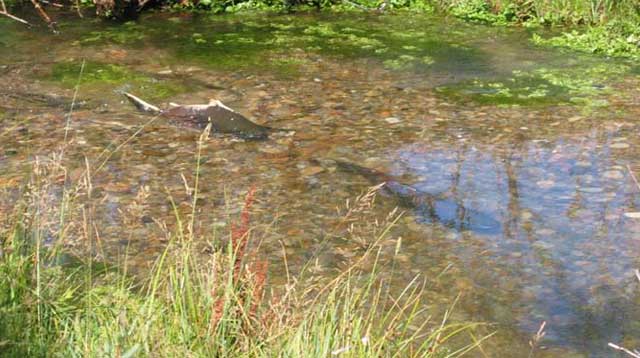 For the last 100 years, however, Big Springs Creek (also known as Patterson/Big Springs Creek) has been dried up in drought years during spawning season because ranchers diverted water (as per decreed water rights)  to raise hay and other crops. After years of creative work, the Custer Soil & Water Conservation District and the Idaho Department of Fish and Game, among other agencies, have worked with ranchers to restore water flows to Big Springs Creek.

“Now, the fish are back,” Martiny says, standing by the flowing stream. “It’s a pretty cool deal. It took a lot of effort from a lot of different people to get them back. But it’s a huge success story.”

In the summer of 2009, a major irrigation  canal known as the P-9 Ditch was closed and about 10 miles of Big Springs Creek were restored. The fish responded quickly.

“We got 10-20 cubic feet per second of water flow in the creek, and that ended up pulling a whole bunch of chinook salmon in there, something like 68-69 redds that first year,” said Eric Leitzinger, fish habitat program coordinator for the Idaho Department of Fish and Game. “Pretty amazing.”

More than 75 ranchers have been involved in improving fish habitat in the Upper Salmon River Basin, including the Pahsimeroi Valley area, in the last 15 years. Life on the Range covered a similar story last year, focusing on projects in the Lemhi River Valley. See this web link: http://www.lifeontherange.org/range-stories/upper-salmon-river-basin-model-watershed-project.asp 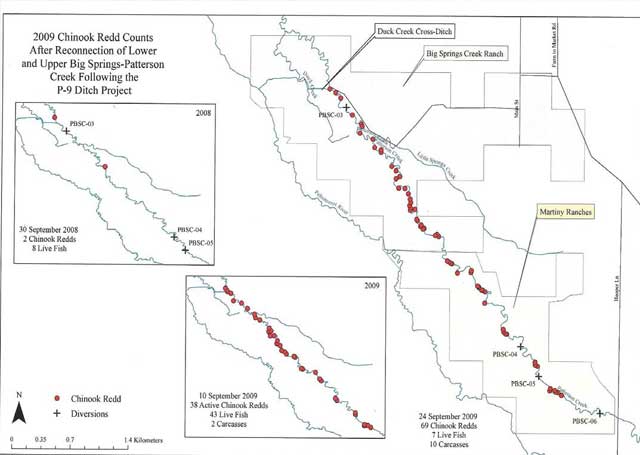 Idaho Department of Fish and Game redd counts (shown in red) show the distribution of salmon spawning beds in the fall of 2009. Below, the old P-9 irrigation ditch.

A big part of the success in the Pahsimeroi Basin is that BPA fish-habitat funds paid for the capital costs of acquiring pivot sprinklers for ranchers to convert to pivot irrigation and for the cost of pumping water uphill to the pivots. Without those funds, ranchers wouldn’t be able to afford such expensive improvements to help fish. 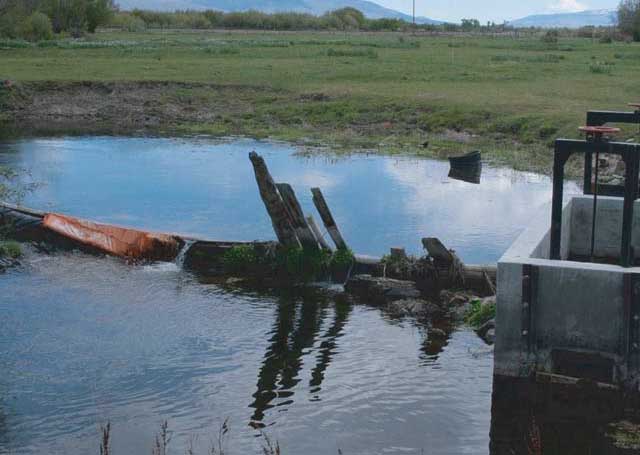 Karma Bragg, District Manager of the Custer Soil & Water Conservation District, notes that a high priority of the district is to keep ranchers in production and ensure that there is no net loss in their water rights. “We haven’t harmed the ranchers, and we haven’t reduced the water that they have available. From our perspective that’s good news in addition to having the fish come back,” she says.

Bragg and the Custer SWCD have been actively involved with the complex water conversion projects in the Pahsimeroi Valley from Day One. It all started in 1994 with Doug Parkinson, owner of Parkinson Seed Farm, whose property is located next to the area where the Pahsimeroi River flows into the Salmon River near Ellis. Parkinson expressed interest in shifting his water diversion from the P-9 Ditch in the Pahsimeroi Valley to pumping from the Salmon River. BPA paid for a new pivot sprinkler, and the Idaho Water Resources Board approved the change the point of water diversion. 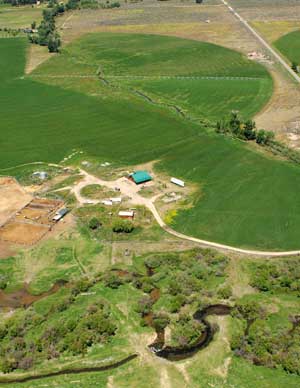 The new pivot sprinkler on the Martiny Ranch is increasing hay yields by 30 percent while using less water, leaving more in the creek for fish.

Up and down the Pahsimeroi Valley, Bragg and others worked with numerous ranchers to change their points of diversion from the P-9 ditch to the Pahsimeroi River and convert to pivot irrigation.  One by one, the landowners made the switch.

“The complexity of the historic irrigation systems, number of landowners, number of partners and funding sources, and the hurdles crossed to obtain water right transfers made this not only one of the most difficult but also most rewarding projects undertaken by the Custer SWCD,” Bragg says.

A key aspect of  the water-conversion projects was to ensure that the water returned to the creeks would not be diverted by junior water rights holders. Idaho has a water transactions program that’s tailor-made for projects like Big Springs Creek, explains Helen Harrington, planning section manager of the Idaho Department of Water Resources.

“The Idaho transactions program looked at keeping water in the stream while keeping the water right holder whole,” Harrington says. “They changed the point of diversion from the creeks to the Pahsimeroi River and closed off the diversions so the fish could access the habitat all the way up from the Pahsimeroi River. It opened up a huge amount of habitat for them.”

By the Martiny Ranch, two flood irrigation ditches that were literally just feet apart were consolidated into one, and a fish screen was installed to keep resident and ocean-going fish out of the ditch. The landowners who participated in that project included Martiny, Kent Moen, Scott Whitworth  and George Santee. 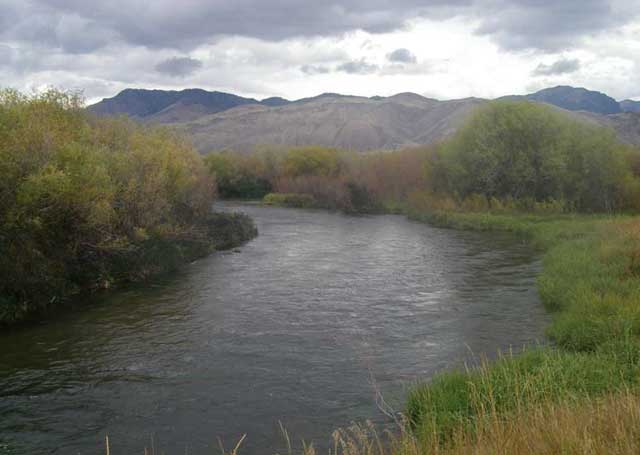 Ranchers now draw irrigation water from the Pahsimeroi River, which has plenty of flows throughout the growing season. This photo was taken in a new public fishing area managed by the Idaho Department of Fish and Game.

Martiny says the efficiency of sprinkler irrigation has increased his hay production by 30 percent. “We’re raising as much as hay as we ever did, if not more, and we’re doing it with less water,” he says. “So that puts more water in the stream for the fish, and it doesn’t take anything away from us. So it’s a kind of win-win situation.”

In the summer of 2011, four bridges were installed near Martiny’s home to replace old culverts that posed a barrier to fish passage. That means more fish can spawn upriver, a goal of Idaho Fish and game. Each new redd, or salmon spawning area, is typically seeded with 4 to 5,000 eggs. New spawning areas should increase salmon populations. That’s good news for Idaho anglers.
“We’d like to see enough fish coming back to fully fill the hatchery, fully seed the habitat and have a surplus available for sport fishing,” says Leitzinger of IDFG. 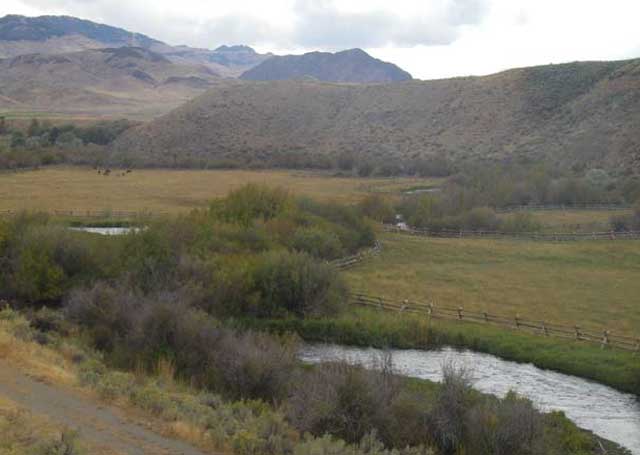 Idaho Fish and Game has been a key player in the Pahsimeroi Basin, installing more than 20 irrigation screens to keep fish in the creeks and rivers. Many miles of buck fence have been built along the Pahsimeroi River and Big Springs Creek to protect spawning beds..

“Through better spawning habitat up here, the survival rates are higher,” Martiny says. “The last couple of years they’ve had a salmon season in the river, hundreds of people come up and fish for the salmon, so it wins for them, it wins for the people in town, economically it’s a good deal. It’s just a real good project.”

All of the water conversions and fish-habitat improvements have been voluntary, Bragg notes, but because the salmon spawning areas lie adjacent to private ranchland, she thinks it’s wise for ranchers to be proactive. 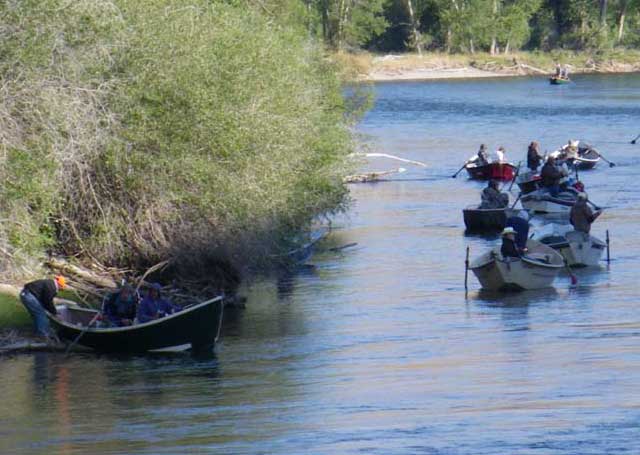 Anglers flock to the Salmon River during a recent salmon fishing season. Efforts to restore salmon and steelhead habitat in the Upper Salmon Basin is expected to increase fish populations and lead to more fishing seasons.

“There are environmental laws out there to protect endangered species and there’s bull trout in the system as well so we believe that moving ahead with these projects ahead of a take issue or an environmental issue is a protection for landowners, and I think the ranchers see that,” she says.

“None of this could be done without the help and cooperation of the landowners,” adds Leitzinger. “They’ve been really good to work with. Stay tuned, hopefully there’s more to come in the future.”