Located at 6,400 feet elevation, under the shadow of Idaho’s tallest mountain peak, the Wiley Smith family has to cope with a short growing season, the constant threat of frost, full-on earthquakes and even running out of water in late summer.

But the Smiths rise to the challenge every day, using their Yankee ingenuity and know-how to run a successful cattle ranch. Their family has been ranching here since the 1930s. The place was homesteaded in the late 1800s, and their water rights date back to 1886. 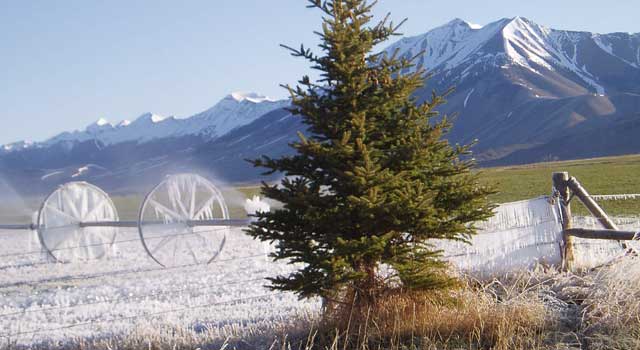 Ranching at 6,400-foot elevation means that the Smiths have to contend with a short growing season. Officially, they are supposed to get about 30 days a year without frost. But some years, it’s much shorter than that.

“I was raised here,” says Wiley Smith, a friendly guy with a great sense of humor. “I like the agricultural life, being out in the open. No two days are the same. You can have a schedule put together as to what you’re going to do for the day, and then in 15 minutes, that’s all changed.

“It’s a good place to raise a family, and there’s always plenty to do.”

One of the constant issues at the Mt. Borah Ranch is a short growing season — less than a month at most. “The Natural Resources Conservation Service says we should have from the 20th of July to the 10th of August, all consecutive nights with no frost,” Smith says. “But that doesn’t always happen. The shortest summer I remember we had 8 consecutive nights with no frost.”

That makes it tricky to raise any crops whatsoever. The Smiths get just one cutting of hay per year, and it’s quite tricky when to plant the seed.

“We try to wait late enough to get into that window where you’re going to get your plants up and not get them froze and killed,” Smith says. “The track record is getting better because Steve and Leon are watching that pretty close.”

Wiley refers to his sons, Steve and Leon, who take the lead in running the ranch these days. The hay crop is a mix of alfalfa and grass. “Our hay is not 100 percent alfalfa. It’s about 40 percent alfalfa and the rest is grass,” he says. “Because if we get an early frost in August, and it knocks 4 inches off of your alfalfa, you’ve lost a lot of hay, but the grass didn’t get froze, you’ve still got it.” 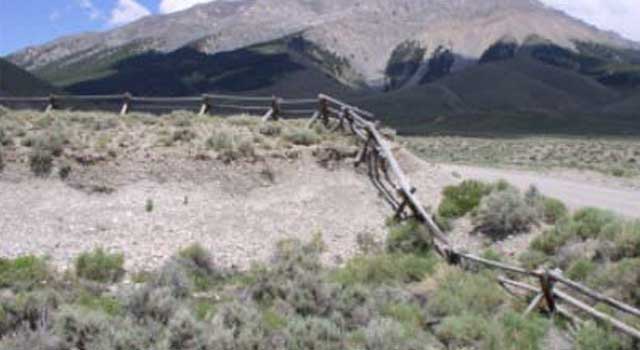 Mt. Borah Earthquake fault line is still readily visible today, almost 30 years later … the Smiths used a concrete flume to convey water from Rock Creek to the ranch. The earthquake destroyed the flume near the fault line, causing the Smiths to convert to an underground pipeline and sprinkler irrigation.

In the fall of 1983, the Smiths were thrown a big curve when the Mt. Borah Earthquake erupted, causing $12.5 million in damage. Part of the damage was a huge crack in a concrete flume that delivered water to the ranch from Rock Creek.

“We were shook up,” Smith says, showing us the deep cleft in the earth near his ranch, still readily visible almost 30 years later. “It was a 7.3. This ground here is 9 feet lower than it was.”

The damage to the concrete flume turned out to be for the best because it created a new opportunity for the Smiths to install a pipeline and convert to sprinkler irrigation. 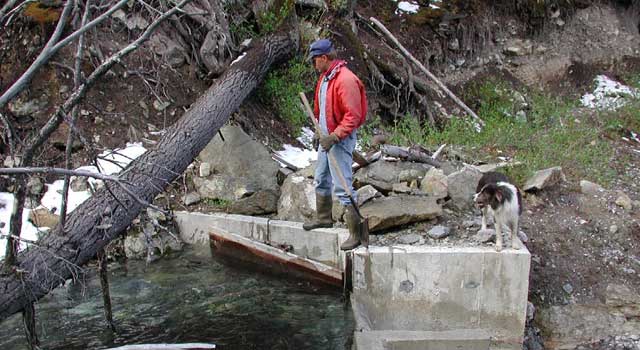 Steve Smith removes debris from the Arentson Creek diversion in the Lost River Range. The Smiths also have water rights on Rock Creek and Cedar Creek.

“It was a blessing because it forced us to abandon 16,000 feet of broken up concrete ditch.  We buried main line with the intention of going to sprinkler irrigation. With the sprinklers, you have better efficiency than we had with flood irrigation. The earthquake made us make a change that was good for us.”

Smith explains that they purchased used pipes from Wyoming, and a contractor from Hagerman installed it for them for a very reasonable price. “He was a fantastic man to work with, and he done us a fantastic job.” 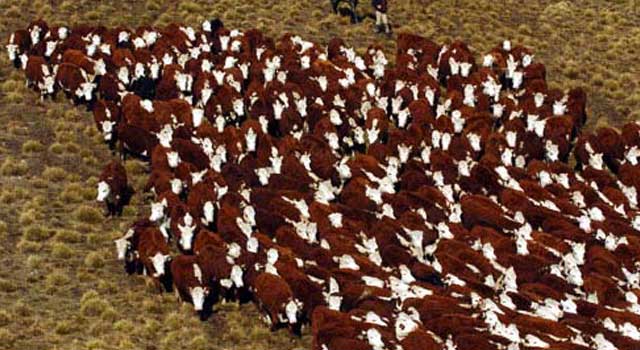 The Smiths graze their cattle on Forest Service and BLM grazing allotments in the summer, north of the ranch. They use a deferred rotation system, meaning the public range pastures get rested on a rotating basis.

The Smiths have water rights on three creeks that flow out of the Lost River Range, Arentson Creek, Rock Creek and Cedar Creek. But in dry years, they can run short, even using pipelines for efficiency.

“This whole area is a large alluvial van of limestone gravel and silt,” he explains. “All of the creeks that flow west off of this range, none of them make it to the river, they all sink. So you have to really hang onto that water and not lose any of it if you can help it.”

Invariably, Smith says they run out of water in late summer, and hope for a little rain before harvest time.

North of the ranch, the Smith’s Hereford cattle spend the summer on a mix of state and federal grazing allotments, north of the ranch. Public rangelands  provide critical summer feed for their cattle. “This is our summer range. Forest Service and BLM. We’re on BLM now. The cows are in their third unit since we turned out.”

The Smith’s manage the range with a deferred pasture grazing management system, meaning that they rest the public land pastures on a rotating basis, under a coordinated resource management plan. Underground pipelines carry water to watering troughs in different pastures.  “Our permit starts on May 25th, but we never put the cattle out until the 5th of June,” he says. “At this high elevation, we want to give the plants as much start at growth before they’re grazed. We think it’s pretty valuable.” 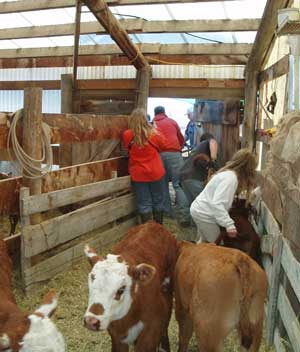 Winters can be bitterly cold and windy in the Lost River Valley. A calving shed provides a warmer place where the mother cows can give birth out of the wind.

The cattle graze on the public range until Sept. 25, and then they’re moved to the home ranch for the winter.

The mercury can dip well below zero during the winter in the Lost River Valley — not to mention a biting wind chill — so the Smiths built a shed for calving. “We built the first part of it in 1981 and saw the benefits of it. As we fill up, we might have 25 cows and calves in here in a single night.”

The calving shed is covered with rugged plastic roofing, which helps radiate heat inside with passive solar energy. Leon sleeps in a “Shanty” next to the calving shed. He  keeps watch over the mother cows in the middle of the night. It’s an around-the-clock job during the calving season.

“With the sheds, we’ve been able to keep our death loss below 5 percent. Before, it was much greater,” he says. “At night we might have 20-25 below zero out there, but you come in here, and it’s 20 above, and it makes a whale of a difference for a calf. Besides that, with the building here and the walls, we’ve stopped the wind. It could be a blizzard outside, but the building stops the blizzard.”

The design of the calving shed reflects the ingenuity and carpentry skills of Wiley Smith and his sons. They built wooden gates to create multiple pens in the shed. “Starting at the end of the shed, this alley becomes a pen. There’s one behind us here, and two more gates, so this alley will be full of cows and salves as well as the larger pens.

“We do cesareans in the first pen, and all of the pulling equipment and chains are right here hanging on the walls.” 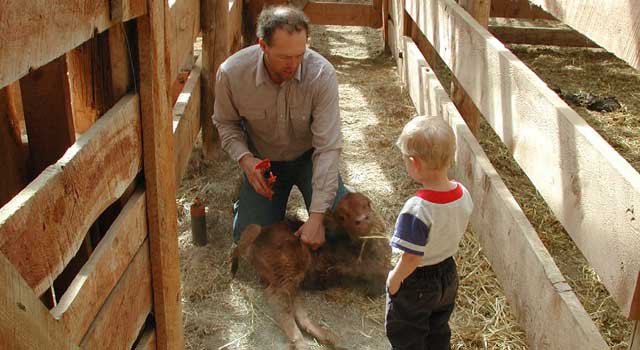 Like many ranchers, the Smiths are very handy at mechanic work to keep the ranch running when equipment breaks down. “You don’t have any choice,” Smith explains. “We’re 22 miles from the nearest town; we do almost all of our mechanic work. I won’t tackle automatic transmissions. But as far as overhauling the diesels, transmissions, rear ends, you bet, we can do all of that. I’ve always liked to do mechanics work, and I took carpentry at Idaho State in Pocatello. And it has paid off big for me. Anything we need built, we build it ourselves.”

Wiley’s oldest son, Leon, elaborates on how important it is to be able to fix things on the fly. “You can’t be running to town every time you have a flat tire or a bearing goes out,” Leon Smith says. “You have to keep the parts on hand and be able to do it yourselves. Dad does have a gift for mechanicking, he went to college for that, and he enjoys it. He’s got a knack for it; he understands how things go together, how they need to work, he does a good job. We’ve learned a lot from him.” 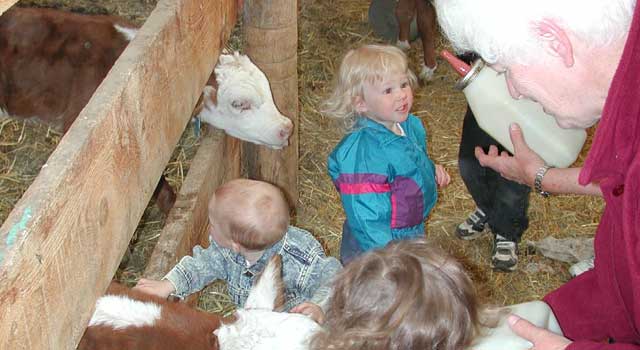 Family and friends help tend to calves in the calving shed. The kids love it.

Leon and Steve plan to continue running the Mount Borah Ranch for many years to come. The Smith’s three other children ended up taking professional jobs elsewhere. The family always has been inspired by their grandfather who bought the ranch in the 1930s, and made a go of it with primitive equipment and no calving shed. Wiley keeps some of the old farming equipment in working order so people appreciate the hard work.

“My thinking is grandpa worked too hard here to sell it,” Leon Smith says. “Same thing with Dad. Hopefully one of Steve’s kids will follow him and pass it on. That’s what we’ve done since our grandpa homesteaded the place.” 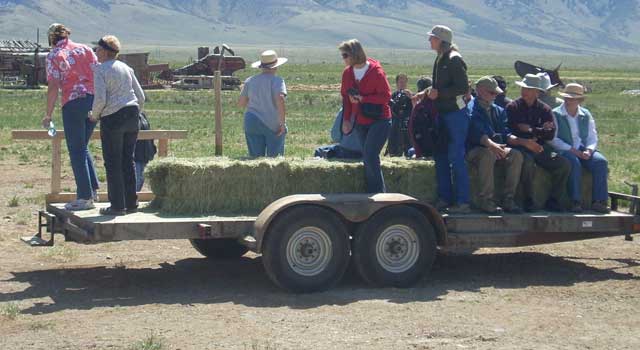 The Smiths held a tour of their ranch in the spring of 2012. Participants got a free hay ride as part of the deal.