More than 80 kids from 10 high schools in Southern Idaho rolled into the Living Waters Ranch in Challis for an intense, two-day natural resources education event called the Idaho Envirothon.

The Idaho Envirothon is a competitive event, held every April. The winning team gets an all-expense-paid trip to the North American Envirothon. This year, the team from Weiser High School captured the state crown. 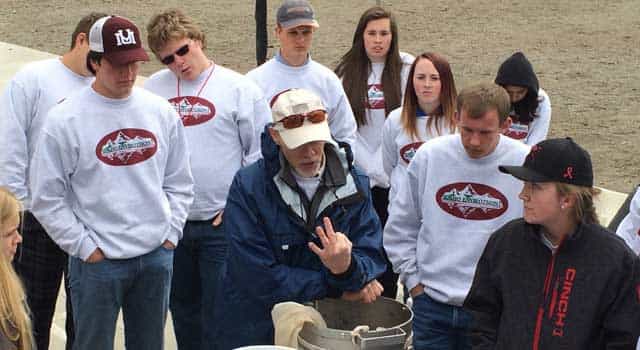 One of the teams from Gooding High School listens to a presentation about aquatics and hydrology from Lynn Van Every of the Idaho DEQ. After a 30-minute presentation, the kids take a quiz about the topic and move on to the next natural resource topic. Living Waters Ranch in Challis is a perfect location for the event.

“Awesome! Excited! I think we worked really well together as a team,” said Ali Reed. “We’ve known each other for a while, so that made things easier. The teamwork helped us get thru all the quizzes.”

To prepare, high school teams study up on soils and land use, aquatic ecology, forestry, wild- life and a current issue — this year, it was invasive species — for months before they arrive. It’s  an  extracurricular  activity. Much like participating in athletics, the kids have to carve out time outside of the normal school day to meet as a team and learn about the issues. “Yeah, it’s really hard to find time,” said Philip Soulen. Chris Banks, chairman of the Idaho Envirothon Committee, explains the purpose of the event. “Envirothon, to me, is an opportunity for kids to learn about issues facing our natural resources,” Banks says. “Learn about those topics to better prepare them for the future. The way we prepare them to be leaders of tomorrow, so if maybe they’re in public office, we don’t have the juggernaut that we have in Washington D.C.”

The Living Waters Ranch in Challis is a perfect location for the event. “It offers the kids an opportunity to be in the water, the trees, we have a soils pit, and have bunks for the kids to sleep in. That’s nice,” said Karma Bragg, project manager for the Custer Soil and Water Conservation District in Challis, who serves on the Idaho Envirothon organizing committee. 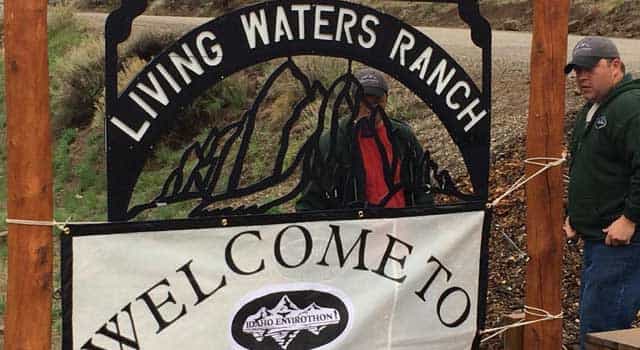 When the students arrive at the Idaho Envirothon, they’d better know their stuff because everything hap- pens really fast, and they’re forced to think on their feet, with very little time to think or prepare. For example, on the first day of the competition, the student teams are whisked from one natural resources station to the next. They hear a 30-minute presentation from a natural resources expert in, say, Wildlife, and then they have 15 minutes to take a test on the topic.

Then the horn sounds, and they move on to the Aquatics station or the Forestry station, for a short presentation and test. Each test is worth 100 points, or 500 points total. But that’s not all. After dinner on the first day, the kids are given a challenging hypothetical natural resource problem to solve. The pressure is on, because they have to give an oral presentation on their solution the next morning with poster-board visual aids. But it’s not easy. 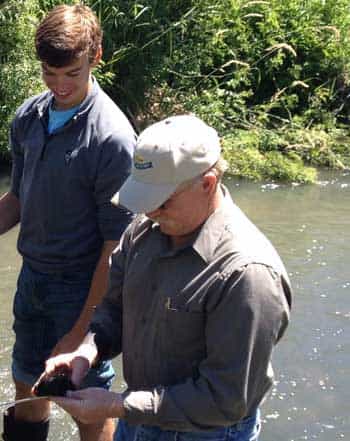 Teams have seven months to prepare for the Idaho Envirothon during the school year before they arrive at the competition in April. It’s an extracurricular activity, similar to sports. Here, Philip Soulen and science teacher Stuart Nesbitt from Weiser High take some water quality samples for a local stream.

“Where do you start? That’s what we’re trying to figure out,” said a member of the Carey High School team.

“You guys got it all figured out?” I asked the Weiser High team. “Yeah, we’re changing the world,” one team member said, giggling. “We’re locking in a few details.” The oral presentation is worth up to 100 points, but it’s the biggest challenge when it comes to critical thinking and problem-solving.

The natural resources problem this year focuses on the closure of invasive species check stations in a fictional county in southern Idaho because of budget cuts. The students have to figure out a way to keep the stations open with other funding sources and protect several popular lakes from getting contaminated with quagga mussels and other invasive species.

“We’re trying to figure out how we’re going to get the funding – that’s our biggest choke point right now,” said a member of the Gooding High School team.

“What if someone shows up at a station with zebra snails mussels on their boat? Do you tell them to go home?” asks a member of the Weiser High team. The following morning, a team from Jerome High School gives their first presentation on the invasive species problem.

“Our main focus is the quagga mussels,” the first presenter said for Jerome High. “Because they have no natural predators, they’re out of control. It’s super hard to keep all of the pipes clean (if they get contaminated with invasive mussels).” 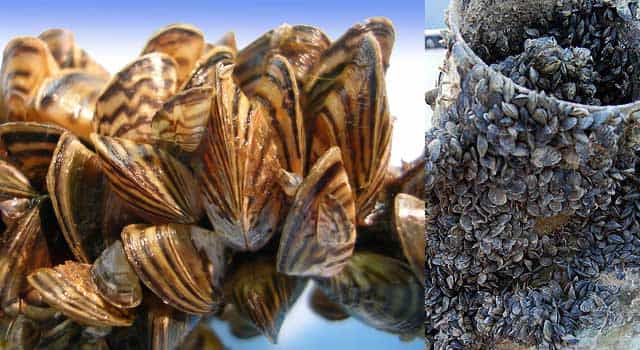 Quagga mussels and zebra mussels were among the invasive species that the students learned about in this year’s Idaho Envirothon. The invasive mussels have taken over parts of the Great Lakes and Lake Mead. Idaho has boatcheck stations at our borders to prevent them from invading the state.

The second presenter talks about controlling carp in the reservoirs, speaking next to a poster board. “To keep it from spreading, we plan on putting on a carb derby tournament to reduce the carp population. The fish will be jumping out of the water and you can catch them in a net or shoot them with a bow,” the second presenter said.

After the presentation, we talked to the five- person Jerome High team to get their thoughts on how it went. Was it scary? “A  little bit,” one of the girls says. “You get this nervous rush, and think, oh my god, and then you get into it, and hit this stride, and you have this sudden confidence boost, and you don’t feel those nerves anymore. And you take off and run! “It was challenging, but it was a very current issue right now, especially with the quagga mussels and all of the water issues, it fits right into that. Quagga mussels is a super big issue right now.”After lunch, the top five teams that scored well in their preliminary oral presentations get a second chance to hit it out of the park. The Skyline High School team from Idaho Falls made the finals with a team of four boys and one girl. “Invasive species. We all kind of know what they are, but few people know what a threat they pose to the local economy and the environment,” said a girl who introduced the topic for her team.

The Weiser High team won the Idaho Envirothon in 2016. By winning, the team received an all-expenses-paid trip to the International Envirothon, held this year in Toronto, Canada.

All five of the team members are required to speak. They have 12 minutes max. Weiser High used an emcee approach with Grace Zimmerman tying things together, and four speakers covering a specific part of their plan. They drew colorful visual aids on the poster boards to assist the speakers with their specific part of the plan. In the end, the Weiser High team prevailed. They had to score high on all the natural resource stations, and score well on the oral presentation.

“We’re not judging these kids on whether they give a right or wrong answer,” says Karma Bragg, project manager for the Custer Soil and Water Conservation District. “We’re looking at how well they address all the different disciplines, how they work as a team. It’s kind of like a science program and a speech and debate program all rolled into one.”

Said Weiser High teacher and advisor Stuart Nesbitt, “They have worked hard all year on everything they do. That’s just who they are. They’re all good students.” Norman Wright, chairman of the Idaho Soil and Water Conservation Commission, was impressed with the students’ performances. “This is the fourth year that I’ve judged the competition, and every year, the bar seems to get moved higher and higher,” Wright says. “It’s amazing how quickly they can put together a presentation that they’re given to cold turkey. And all of a sudden, they come up with something wonderful. You see this and you just marvel, wow, American society might have a chance with these bright, great minds that we’re producing. Hey, there might be hope for us after all!” 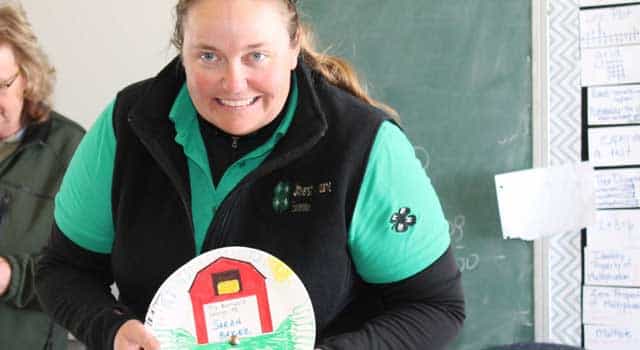 Ultimately, the goal of the Idaho Envirothon is to pique student interest in natural resources in hopes that they might pursue it further in college or even as a profession. Two women who judged this year’s Envirothon actually participated in the event as high school students some years ago. Rosana Reith grew up in the Challis area and competed as a member of the Challis High School team. Now she works for the Natural Resources Conservation Service as a range management specialist.

“One of the great things about Envirothon is it really allows you to develop the power of thought by engaging in critical thinking,” Reith says. “You have to really think about how ecology and natural resource management fits into soils and wildlife and aquatics and forestry and whatever that current issue is for that particular year, and meld all of that together.

“Looking back now, all of those things I deal with on a daily basis,” she continued. “As a rangeland management specialist, I need to know about soils and forestry and water quality and wildlife. All of those things mesh together. So I definitely feel that Envirothon and everything we learned then set the ground work for what I do today.” Sarah Baker, a University of Idaho Extension Educator in Custer County, says that her experience in Envirothon set her up for success in college and in her career. “The skill sets we learned in Envirothon were huge,” Baker says. “I went to CSI and finished at the University of Idaho. In my freshman soils class, I was the smartest one in there because I’d already learned that stuff in Envirothon. After moving up to the University of Idaho, and graduating, I still use those skill sets that we learned. Not just the technical stuff, but the wildlife, the aquatics, whatever, but the problem-solving skills, communicating with others, standing in front of people and giving presentations, all of those skills I learned in Envirothon have helped me immensely in college and in my career now.”

For more information on how to put together a team for the Idaho Envirothon, go to the web site (http://ida- hoenvirothon.weebly.com) to gather background materials and get signed up. You also will need to work with your local soil and water conservation district to get sponsored in the competition. There’s a district in every county of Idaho. Refer to a soil conservation district map at this web site (https://scc.idaho.gov/what-we-do/district-support) to contact the right district. 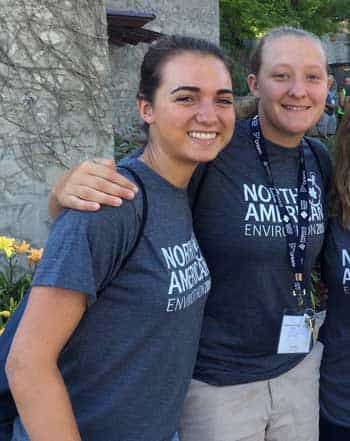 Maggi Laan and Ali Reed of Weiser High School pause for a photo while participating in the North American Envirothon in Toronto, Canada, last summer.

In two years, there will be an extra incentive to participate because the North American Envirothon will be held in Pocatello, Idaho! “The International Envirothon that’s going to come to Idaho in 2018. It’s a great honor and we’re glad to do it,”said Bragg. “We hope that’ll give more schools an incentive to field a team. One of the things we’re trying to do is grow and get more teams and schools involved. And that really falls back on the soil and water conservation districts to accomplish that.”