Many ranchers in Idaho have base property where they typically graze cattle or sheep on the home ranch in the winter and provide shelter for calving and lambing operations. In the summer, ranchers move their livestock to graze on public lands grazing allotments managed by the Bureau of Land Management or Forest Service. 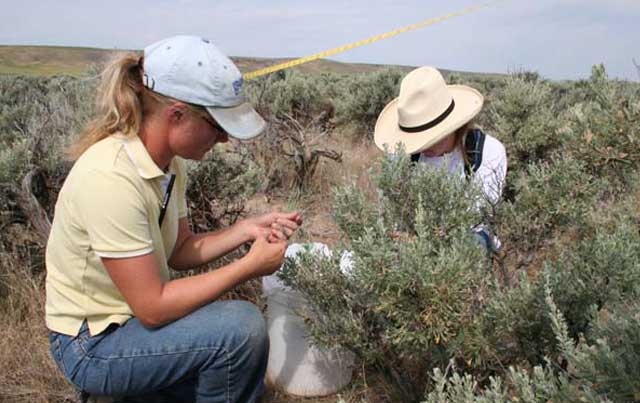 The first step in renewing a BLM grazing permit is for the agency to conduct a rangeland health assessment, checking on the health of plants, wildlife, water quality and other resources in a grazing allotment.

Public grazing allotments are critical to the overall grazing operation — they’ve been an integral part of ranching in the West since the turn of the century — but nowadays, ranchers are finding that the renewal process for BLM grazing permits is becoming much more extensive and time-consuming.

To qualify to graze livestock on public lands, ranchers must first obtain a special use permit. Grazing permits have to be renewed every 10 years, as required by federal law.

Codie Martin, assistant field manager for the BLM in the Twin Falls District, explains the multi-step grazing permit renewal process, which can take well over a year or more.

“It starts with an application when the permit has expired,” Martin says, “And then the next step is we go out to the field with an interdisciplinary team comprised of a rangeland resource specialist, botanist, archaeologist, wildlife biologist, hydrologist,  and they go out and do a rangeland health assessment to determine the condition and see if it’s functioning properly.”

All of the information from the BLM specialists is summarized in a land health assessment report. “Basically, the report indicates whether that grazing allotment is meeting Idaho standards and guidelines, or not, and if it’s not, whether that was caused by livestock grazing,” Martin says.

The next step in the renewal process is a more detailed report called an environmental assessment (EA), a report required by the National Environmental Policy Act.

“Basically, in the environmental assessment, we analyze a range of alternatives, from existing use to less use or no grazing, and it analyzes the impacts of livestock grazing on all of the other resources out there on BLM land,” Martin says.

The EA recommends a course of action based on staff input and public comment, and then the BLM field manager makes a final decision to renew the grazing permit, modify it or recommend some other action. At this point, the EA can be appealed by any interested party, including environmentalists, livestock permittees or other public interest groups. 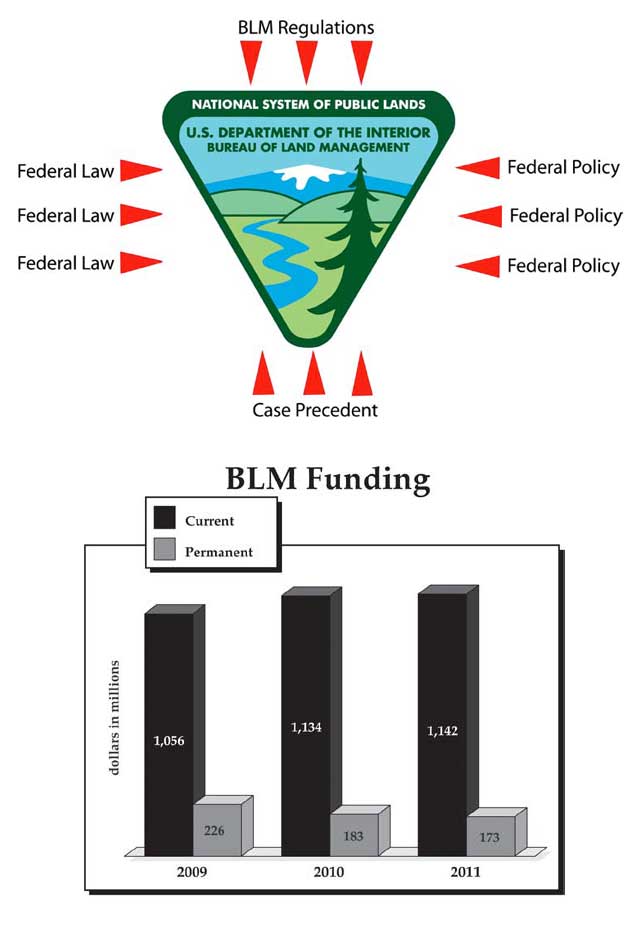 In the last two years, 27 BLM grazing permit decisions have been appealed in Idaho. Plus, 12 lawsuits were filed in federal court in the last four years over BLM grazing decisions or BLM management plans.

“Because of the litigation, our process takes longer, we have to gather better data, and we have to do a better job of measuring cumulative effects,” says Mike Courtney, manager of the BLM Field Office in Burley. “We’re kind of in a box, with regulations, laws, policy and case precedent being the sides of the box, and every time we get sued and win or lose, the shape of the box changes a little bit. And lately, it’s been shrinking.”

“The people who are dragging the BLM into court are wasting a lot of time and money, and they’re accomplishing nothing,” Peavey says, while providing a tour of his ranch. “They’re an impediment to good grazing practices, really.”

Peavey explains. “Range conservationists that the BLM hires are college graduates, and they’re trained in how to improve the range and how to create a rangeland that can sustain itself,” he says. “We’ve lost all of that. Because the BLM is tied up in court, they don’t have the money to fight the lawsuits and do the monitoring. Even if you have a situation where you have a bad grazing practice, you can’t change it.”

BLM officials agree that appeals and lawsuits are slowing the process down with permit renewals. But asking Congress for more money to fix those issues isn’t going to happen, Courtney says. “We could always say we need more staff and budget, but we’re not going to get it.”

Peavey says that ranchers can help their own cause and that of the BLM by monitoring range conditions on their own.  “We’re going to start doing our own monitoring, by hiring credible people who have gone to school in range science to see how the land is reacting from year to year,” Peavey says. 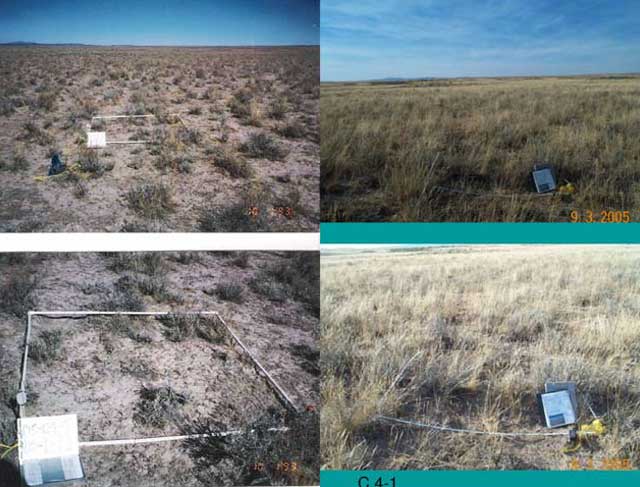 BLM officials encourage ranchers to do their own monitoring to help document rangeland condition and health.

Courtney encourages ranchers to do monitoring work, particularly with photos. “I think the biggest help is photos,” he says. “We can collect a lot of data and argue about what it means, but when you’re looking at a photo of a place that’s bad and a photo of the same place that’s good, and you can say, here’s how I changed my management to get here, that’s hard to argue with. And I think we’re doing a better job of using those photos in our documents.” 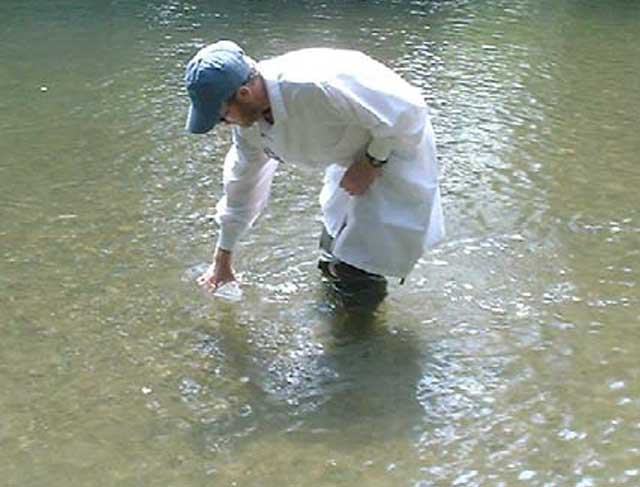 The BLM tests water quality in streams to check on the impacts of livestock grazing.

The BLM also does plant transects to document rangeland health. “One of the things we do is a point intercept transect,” Martin says. “We usually do 100 points. We drop the point down and we measure the height of grasses, forbs. We want to make sure we have enough habitat for nesting sage grouse, and winter habitat for sage grouse.”

BLM range conservationists regularly review grazing systems with permittees to look for ways to improve management, Martin says.  “It might be things like changing the season of use, rest rotation, moving water away from a resource of concern, or installing new range improvements such as fences, water facilities for better distribution, things like that,” he says.

Martin has seen a lot of improvements occur in his career. “I feel like I can come out here and make a difference,” he says. “I can work with a permittee, these guys who are making a living off this land, while still trying to maintain natural ecosystems and make sure things are being taken care of for future generations and other users.” 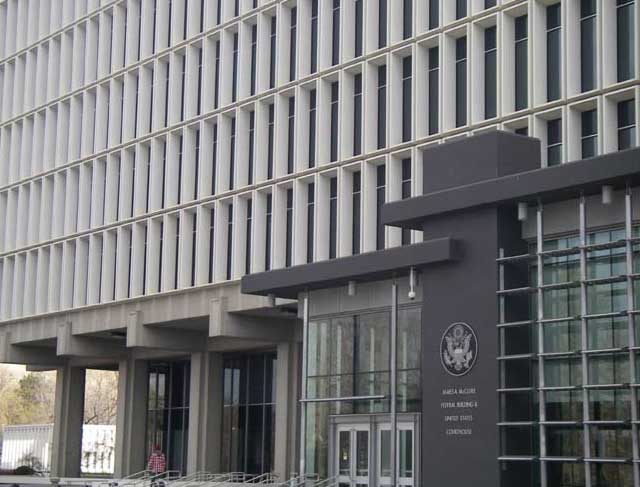 The BLM has been sued 12 times in the last 4 years over grazing decisions or BLM management plans.

The BLM’s Mike Courtney believes the BLM can defend its decisions by doing a thorough job. “If you look back at case precedent and where we’ve won and where we’ve lost, we have an ability to maneuver through the NEPA process and write decisions that we can defend. And that’s why it takes so long.

“I think we gather data in a scientifically sound way; we process that data in a sound way. In litigation there’s always a debate about how that data was used, but by and large, I think we do a pretty good job,” Courtney continues. ” From what I see, we have pretty healthy rangelands. The permittees are more astute and aware because of all the litigation, and I think they do a better job. Their livelihood depends on the health of their allotments. So I think, long term, we’re going to be in good shape.”