In fact, 23 years after wolves were reintroduced to Idaho beginning in 1995, federal authorities responded to a record 113 different sheep and cattle ranches in the 2018 state fiscal year to perform necropsies on wolf-livestock kills, where livestock kills were confirmed, and 217 ranch properties to investigate wolf kills overall, officials said. Both of those numbers set records. 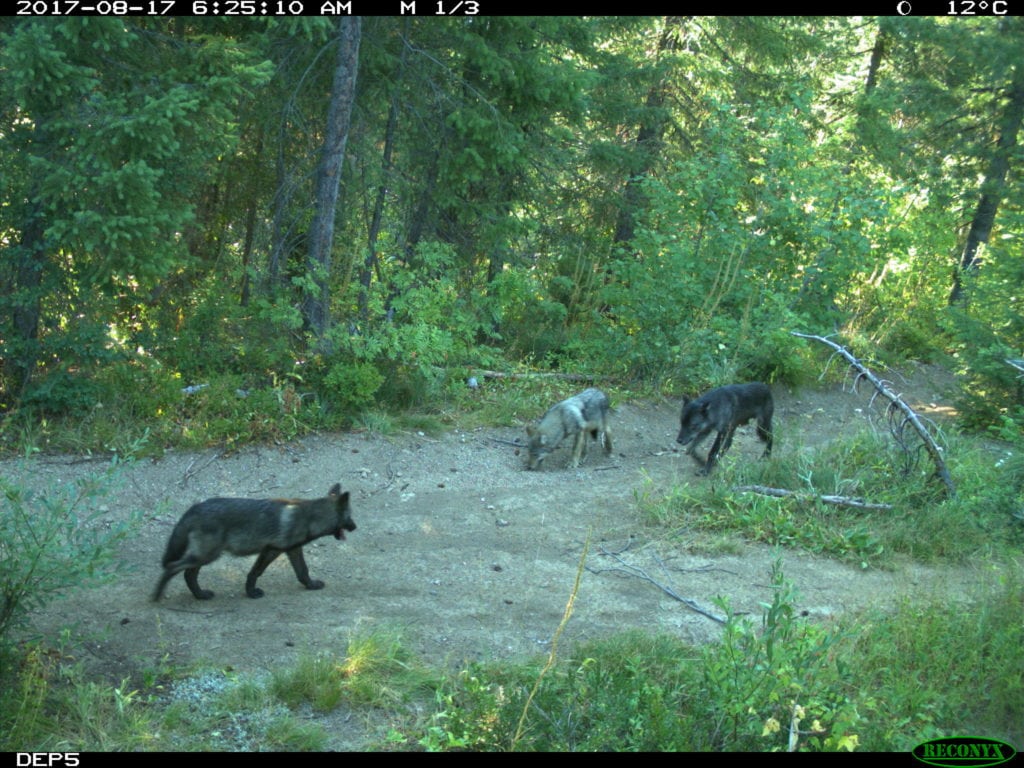 Wolves captured by a remote camera in Idaho (Courtesy IDFG)

“This is going to be a busy summer,” said Todd Grimm, Idaho State Director of federal APHIS Wildlife Services. “There seems to be greater awareness of cattle and sheep producers that the potential is there that wolves are coming into more conflict with livestock.”

While environmental groups complained last week about Wildlife Services killing wolves in response to the sheep kills in July, officials with the Idaho Rangeland Resource Commission noted that Wildlife Services was simply doing its job.

“We appreciate that Wildlife Services was able to respond quickly to a situation where wolves were repeatedly killing sheep over a multi-day period,” said Carey rancher John Peavey, an IRRC board member. “It’s been federal and state policy since Day 1 to control wolves when they prey on livestock. Idaho Fish and Game signed off on the control actions, as it does for all of those situations.”

“We need to keep wolf numbers down to a manageable level, and that takes persistent diligence by all concerned to work on this chronic issue,” Peavey continued. “Wolves are here to stay. But we need to keep them as wild as possible to ensure they’re eating wild game such as moose, elk and deer, like they’re supposed to do. Once they start killing livestock, they need to removed, because we know they’ll go out and kill livestock again.”

With at least 80 to 100 packs of wolves living in Idaho, wolves essentially occupy the entire state north of Interstate 84, and wolf populations are expected to continue growing, according to Idaho Department of Fish and Game officials. Wolves have expanded from Idaho into Washington and Oregon and they’re spreading into California as well. DNA evidence also indicates that wolves freely travel back into Idaho from Montana, Wyoming, Washington and Oregon.

Mark Henslee, who runs Salmon Falls Land and Livestock with his brother Mike, said they had six guard dogs protecting one band of sheep that was preyed upon by wolves in the July incidents. The normal standard is two guard dogs per band of sheep to ward off coyotes, black bears and mountain lions. The Henslees had noise-makers and strobe lights set up at night around the sheep in hopes of preventing wolf kills.

“I don’t know what more we can do,” Henslee said. “We haven’t had any problems in several years. But with as many wolves as we have in Idaho, you’re going to get hit somewhere, sometime.”

Indeed, since wolf populations soared to more than 1,000 animals by 2009, wolves have killed more than 700 cattle and 550 sheep in Idaho, impacting a total of 412 different ranchers statewide.

Lemhi, Custer, Valley, Idaho and Elmore counties have “chronic livestock depredation” issues, according to state and federal officials. Last year, the number of confirmed wolf depredations in Valley County more than doubled from 17 to 38 after Cascade rancher Phil Davis and IRRC staff met with ranchers to discuss the different kinds of depredation that can take place. Davis has had at least one mother cow killed by wolves in which there was no outward signs of trauma on the exterior of the animal – until a necropsy was performed by Wildlife Services – and then wolf bite marks and hemorrhages proved that it was a wolf kill.

Davis, who has had more than 60 wolf kills on the family’s private land since the mid-1990s, was surprised by the incident. “That’s the real sickening part about this, they say they’re not surplus killers, they don’t kill for sport, what do you call this?” Davis said. “Of our six depredations in 2017, three of them were full-grown cows. So they’re getting more bold, more adept at it, and they’re killing cows, not just calves now.”

If ranchers suspect that wolves have killed their livestock, they should call federal APHIS Wildlife Services to report the incident, 208-378-5631, and request a local trapper to investigate. Or, call your local IDFG office.

Ranchers who have confirmed livestock losses should contact Josh Uriarte at the Governor’s Office of Species Conservation to request compensation funds and assistance with federal paperwork, 208-332-1556 or Joshua.uriarte@osc.idaho.gov. 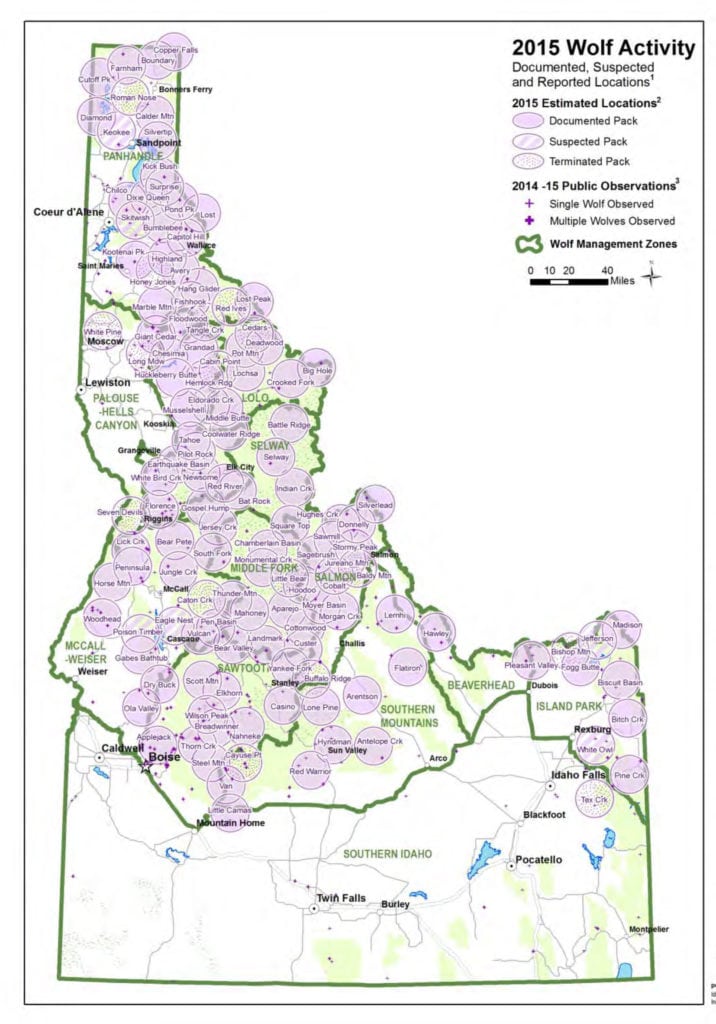 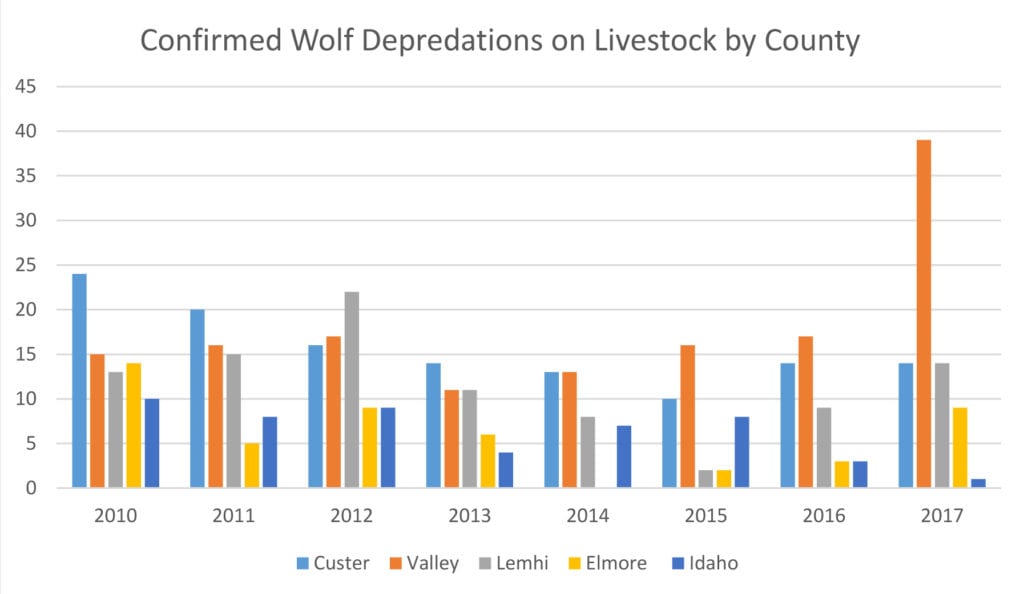