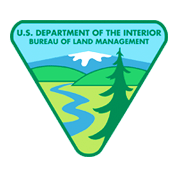 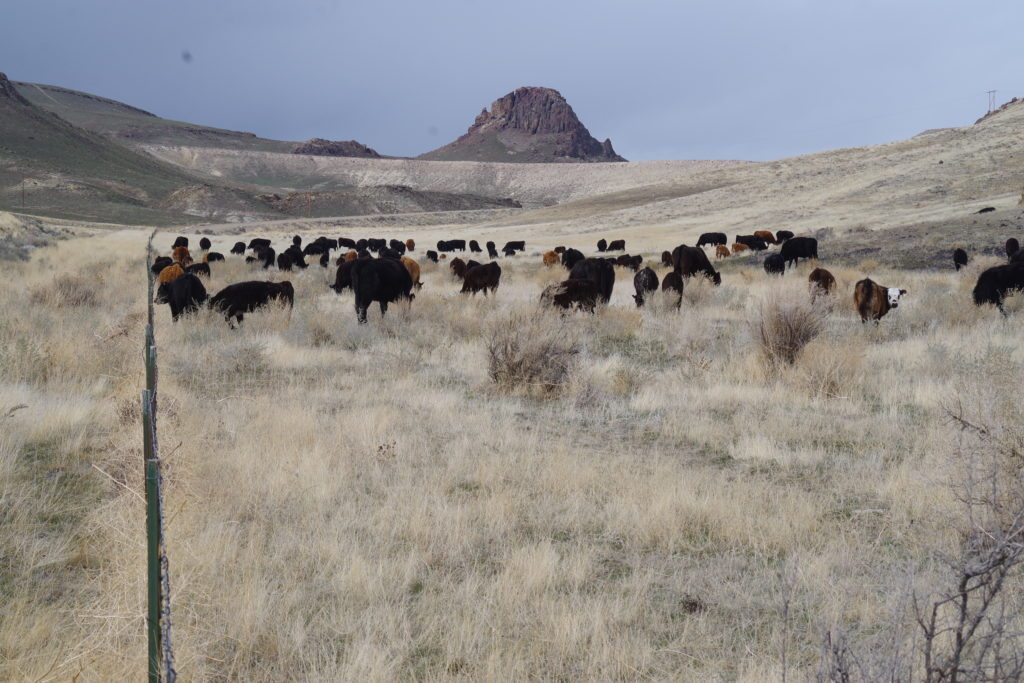 Cattle graze on cheatgrass to create a firebreak at the base of the Owyhee Mountains.

BOISE – The Bureau of Land Management has begun implementing an experimental targeted grazing project aimed at reducing fuels and associated fire risk and protecting rehabilitation efforts within the Soda Fire zone.  Participating local ranchers will be grazing livestock along 36 miles of Owyhee Front roadways from approximately Marsing to Murphy from now through June.

This targeted grazing effort is part of the larger Soda Fuel Breaks project designed to reduce fuels, specifically annual grasses such as cheatgrass.  The purpose of this is provide firefighters a better opportunity to prevent wildfires from burning a landscape that is still recovering three years after the 443-square-mile wildfire.

“We’ve made important gains in rehabilitating the area burned in the Soda Fire with the help of many partners,” said BLM Boise District Manager Lara Douglas. “Targeted grazing allows us to experiment with a new tool to protect those gains, while at the same time supporting traditional land uses.”

The Idaho Rangeland Resources Commission (IRRC) is partnering with the BLM to raise awareness of the targeted grazing efforts with both the local community and visiting recreational users who may see livestock on roads.

“We are pleased to see the targeted grazing project moving forward,” said Gretchen Hyde, executive director of the Idaho Rangeland Resources Commission.  “Ranchers are excited about helping the BLM achieve their objectives with the fuel breaks.  We feel it makes sense to graze off the cheatgrass in a timely manner, when it’s palatable to livestock and before it becomes a fire hazard.”

IRRC officials have contacted off-road vehicle recreation groups to give them a heads-up that cattle will be grazing along the Owyhee Front this spring as part of the experimental project.  The BLM has posted road signs in the project area to inform and educate recreation users and the general public about the project.

The goal of this targeted grazing project is to reduce vegetation to a height of 2 inches or less for 200 feet on both sides of the selected roads by late June, prior to peak fire season.  Should a fire come through the area later, flame lengths will be greatly reduced, making fire suppression much safer and more effective.

“Fuel breaks are a tremendous asset for firefighting in the Owyhees,” said Acting BLM Owyhee Field Manager Lance Okeson.  “By creating a solid anchor point with an extensive fire break at the foot of the Owyhees, we go a long way toward protecting multiple-use sage-steppe habitat for wildlife, which we’ve worked so hard to restore after the Soda Fire.”

The BLM manages more than 245 million acres of public land located primarily in 12 Western states, including Alaska. The BLM also administers 700 million acres of sub-surface mineral estate throughout the nation. The agency’s mission is to sustain the health, diversity, and productivity of America’s public lands for the use and enjoyment of present and future generations. Diverse activities authorized on these lands generated $75 billion in sales of goods and services throughout the American economy in fiscal year 2016—more than any other agency in the Department of the Interior. These activities supported more than 372,000 jobs.