Like many ranchers, Mayfield rancher Jeff Lord watches for opportunities to improve the public range where his cattle graze.

Following the 280,000-acre Pony-Elk Complex wildfires in 2013, Lords partnered with state and federal agencies to assist with range-rehabilitation projects in the Danskin Mountains. 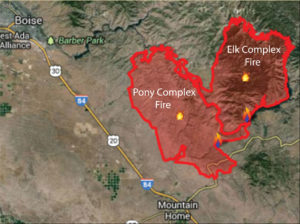 Wildfires can be tough on the landscape and cause economic hardship. But after the fires die out, there’s a chance to replant and start anew. That’s a big priority for the Idaho Department of Lands, the BLM and the Forest Service, too.

The agencies spent more than $6.5 million on rehab and restoration projects following the wildfires.

Timely and extensive seeding activities, combined with a string of good winters and spring rains, plus well-managed grazing, are helping rangelands in the Danskin Mountains rebound nicely, officials say.

The Lord Ranch is located just north of Mayfield, east of Boise. He runs cattle on private, state and federal range in the Danskin Mountains.

“Turned out to be a pretty good project, and everybody’s pretty happy with it,” Lord says. “I’m not saying it’s perfect, but it looks pretty damn good. Pretty significant improvement.” 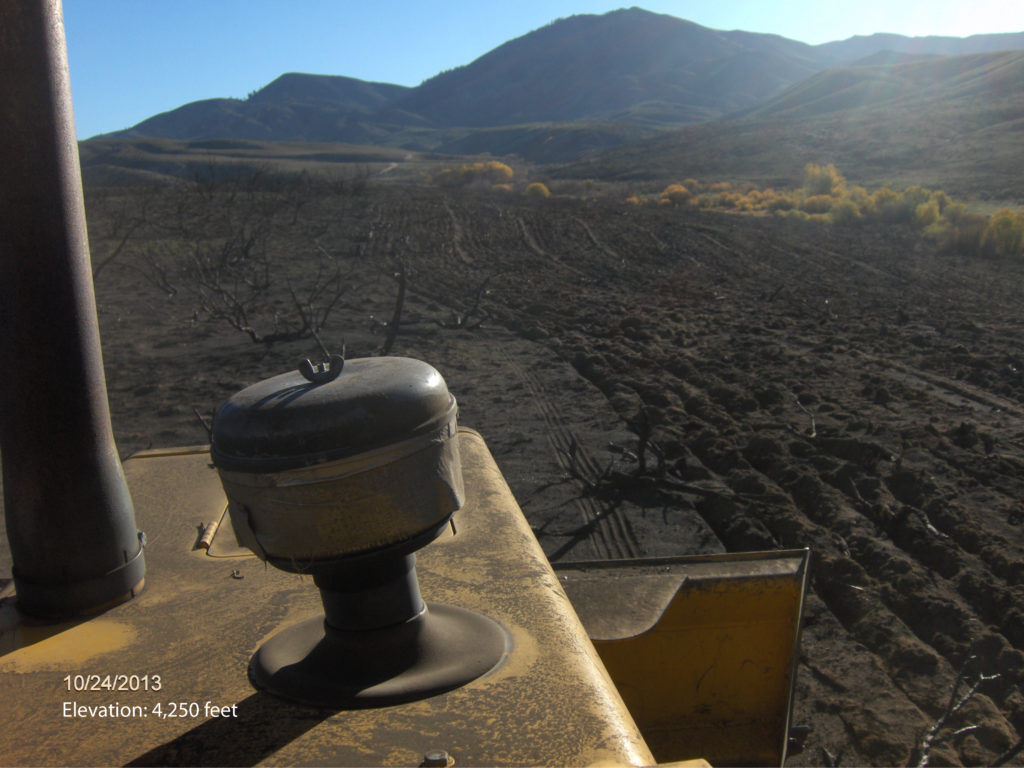 Jeff Lord takes a pic of drill-seeding state land in the fall of 2013 from the seat of his tractor.

“I think this area looks fantastic after the fires,” adds Cindy Lancaster, range management specialist for the Boise National Forest. “It’s been six years since the Pony complex fires came through. Quite a variety of plant species have come back.”

Lord and Lancaster remember how cooked the soil looked after the Pony-Elk Complex fire. Fortunately, the burn severity to soils was rated low to moderate.

The Life on the Range crew toured the Danskins with Lord and Lancaster last June as part of an ongoing series on rangeland restoration projects following the Pony and Elk complex fires.

At Stop #1, we looked at a drill-seeding on state land.

“We saw the opportunity to reseed it,” Lord explains. “I provided the dozer and the fuel, and the labor, the BLM provided rangeland drills, state determined the mix, and NRCS paid for the mix. It was just totally black. Very few skeletons around here. Very hot, very clean burn. Really easy to drill.”

Lord might say it was easy, but he actually finished drill-seeding in the snow as winter was coming on. 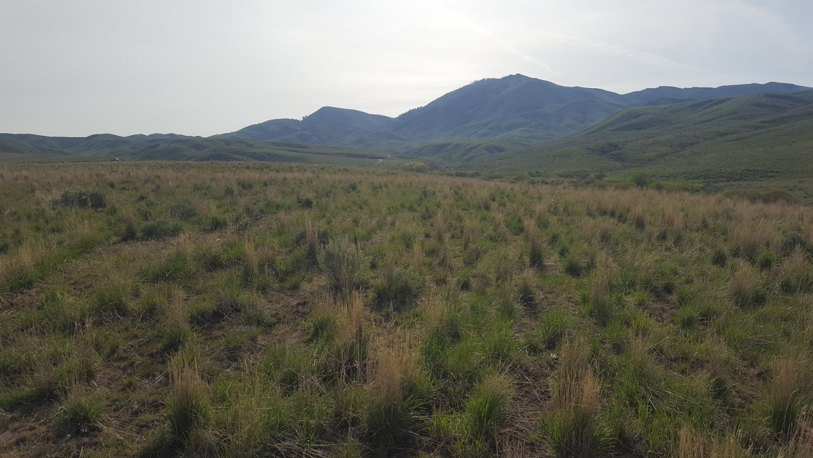 “We had a phenomenal fall, I came out of here in the snow after it rained for a week, doesn’t help the drilling process, but it helps the growing process,” he says with a grin. “We came back the next spring, wet cool spring, seeding did really well, we could see that it was recovering rapidly. We were able to come back on here after one growing season. It was perfect conditions.”

Since that seeding got established, plant diversity on the site has increased, Lord’s cattle have plenty to eat, and wildlife graze on it year-round.

Vegetative monitoring shows the site produced 165 pounds of forage per acre before the fires, and now it’s producing 800-900 pounds per acre, officials said.

“It’s two or three times as productive as it ever was before,” Lord says. “We’ve used it every year since then. We come in on the 1st of June, spend 2-3 weeks here, and then we move on.” 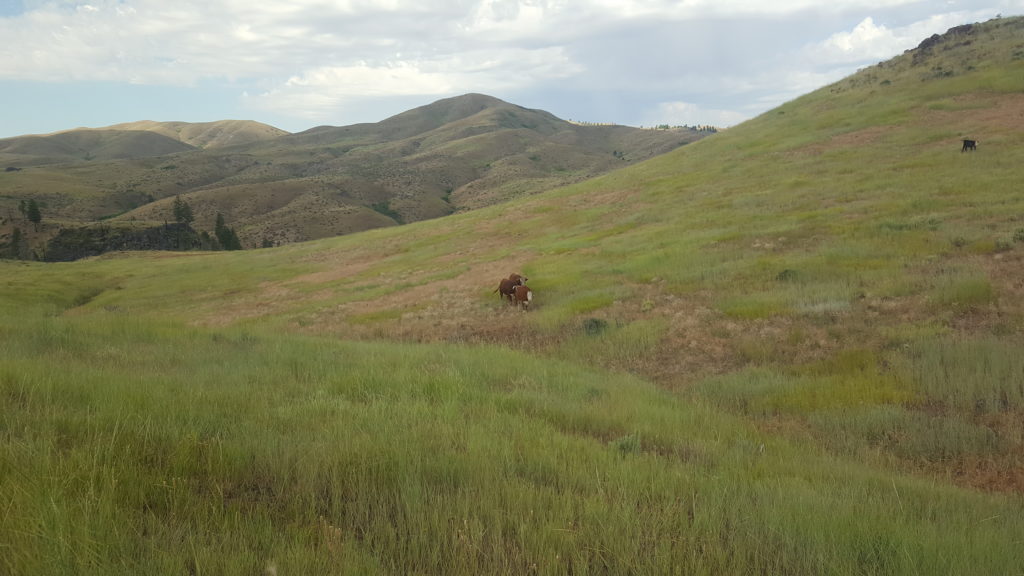 At Stop #2, we looked at a side-by-side area in Long Gulch where the Boise National Forest did an aerial seeding in 1992 following the Foothills Fire, and an area where Lords did a drill-seeding on state land in 2014.

“I was a real no-go guy on aerial seeding. I thought it was a waste of money,” Lord says. “If you can rangeland drill, year after year, it’s been proven that that’s better.”

That’s how a lifelong farmer and rancher would look at things. But seeing is believing. 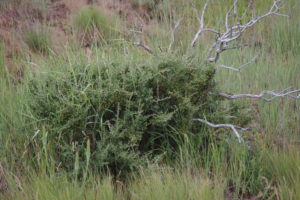 Bitterbrush and sagebrush were coming back in a big way via aerial seeding and natural regeneration post-fire.

“That residual aerial seeding … it kind of hit a perfect storm. The seeding just took off and exploded,” Lord says. “I was convinced I was going to have one of those pictures where this is what I did on state land, and they did this, and you can see from the picture behind me that I lost all of my credibility on that.”

Adds Lancaster, “It’s interesting to me. I’m very happy with how it’s come back.”

Numerous sagebrush and bitterbrush plants also are growing up from the seedings and natural regeneration – just seven years after the wildfire.

“We come in here in July when it’s hot,” Lord says. “It’s got solid introduced perennial grasses, it’s fully mature when we come in here and graze it, then we get off it, and it has a chance to recover.” 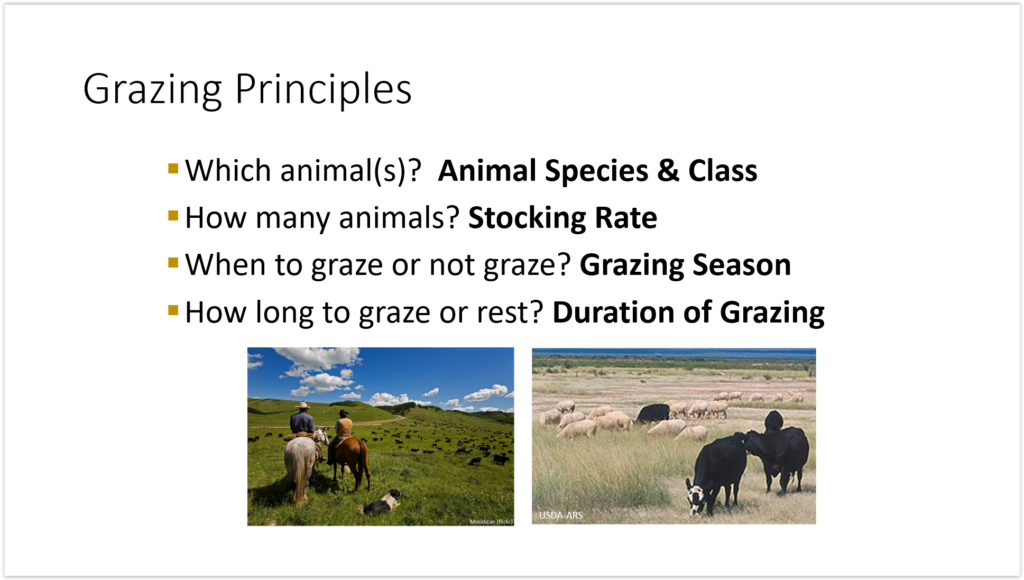 This is where Lords pays attention to best grazing practices to conserve the range, referring to a range-management mentor, University of Idaho professor of range ecology, Karen Launchbaugh.

“It’s all about timing, intensity, duration,” he says, quoting Professor Launchbaugh. “So we graze it at the right time of year, duration is appropriate. Intensity – the trick there, is how many cattle do you get on it to get the utilization right, and get off after a short time.”

In Stop #3, Lord showed us a 20-acre patch of land where he drill-seeded native bluebunch wheatgrass and Idaho fescue in the Danskins. He didn’t think the seeding would survive.

“Right on front of me, you can see the drill row where I planted bluebunch wheatgrass,” he says. “The seed was donated by BLM, bluebunch wheatgrass and Idaho fescue. I’ve never tried to grow native perennials before, I couldn’t get permission to plant anything else, so I thought well, I’m going to find out if I can grow it. 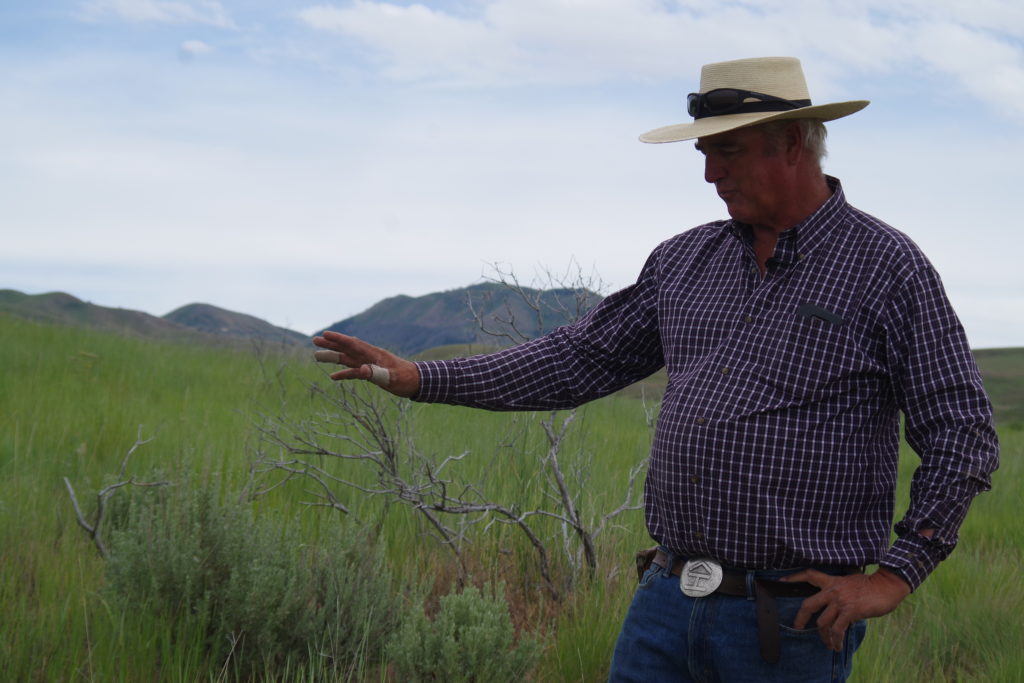 “And we were just shocked. Tons of recovery here.”

Ultimately, he’s pleased with not only assisting in restoring rangelands in the Danskins, but also creating better habitat for birds and wildlife.

“Habitat is what you really have to look at,” Lord says. “Too many times, people on all sides aren’t thinking about what’s best for the land, they’re thinking about their personal agendas. But this is an exception to that. This is an example where everybody worked together.”

Pony-Elk complex fires were the largest in the U.S. in August 2013, NASA report: https://earthobservatory.nasa.gov/images/81841/lightning-fires-in-central-idaho