Each spring, about 80 to 100 sage grouse come to mate on a large flat in the upper Pahsimeroi River Valley, near Challis.

After mating season, the hens raise their broods on state and federal land in the Donkey Hills and take them across a dirt road into a spacious wet meadow on private ranchland to raise their young. 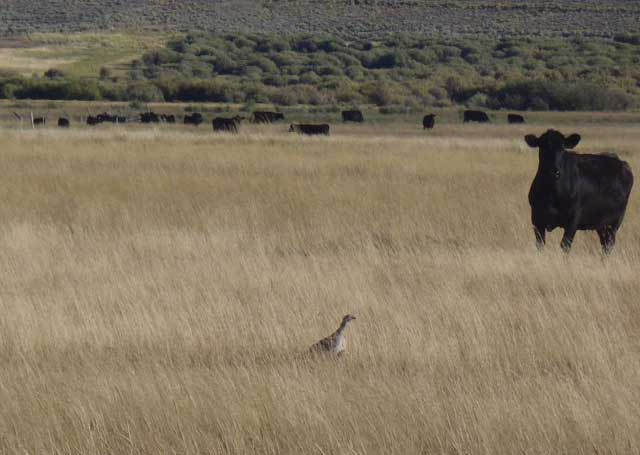 A sage grouse shares the Goldberg Meadow with cattle in late summer. Earlier in the year, the cows are kept away from the meadow so sage grouse broods and other wildlife can thrive. (Photo courtesy NRCS)

The Goldburg Meadow belongs to rancher Tom Page of Big Creek Ranches, who is making a number of improvements on the property to benefit sage grouse and other wildlife such as curlews and antelope.

A new livestock management plan delays the time when cattle move into the meadow,  leaving it available for sage grouse and other wildlife at a critical time of year.  He’s also installed 10,000 feet of wildlife-friendly fence around the perimeter of the property.

“The fence itself, to be wildlife friendly, is 42 inches high, 12 inches between top wire and 2nd wire, and the bottom wire is 16 inches from the ground surface, to allow antelope to go underneath it,” she says. “We also marked 10,000 feet of the top wire with sage grouse fence-markers, made out of vinyl siding, and they are spaced at 3′ apart.” 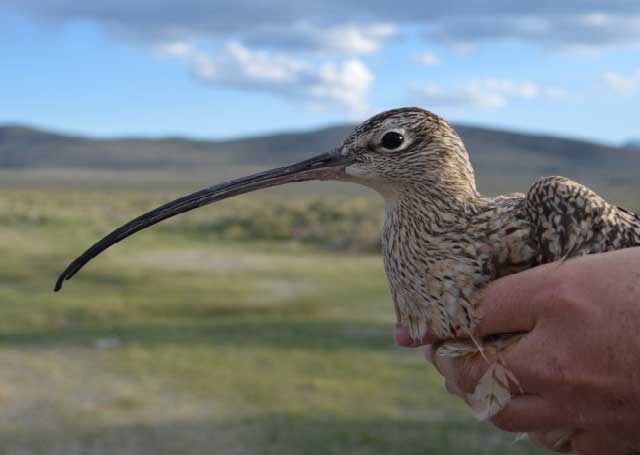 Curlews also are thriving in the Goldburg Meadow in the springtime.

The reflective markers on the top wire are the product of University of Idaho graduate student Bryan Stevens’ work. “It’s been documented that fence strikes are a significant risk to sage grouse mortality, so these markers increase the visibility of that top wire,” she says.

Rancher Tom Page has a deep background in land conservation work. You might say he’s a conservationist first, and a rancher second. In the late 2000s, he bought several ranches in the Pahsimeroi Valley because of the conservation opportunities that exist in the area. 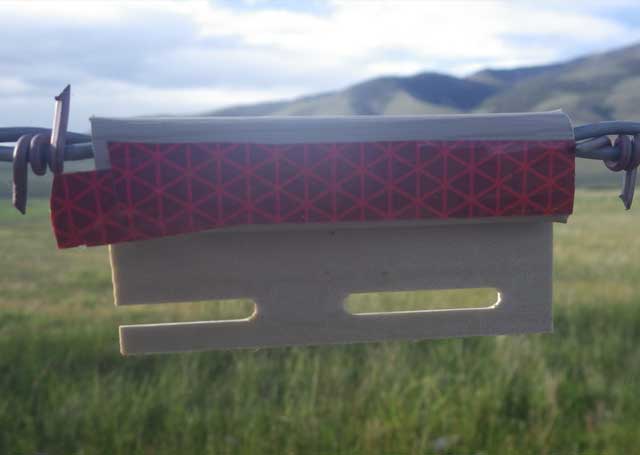 “One of the things that the upper Salmon had, that a lot of different areas didn’t have, was this nucleus of a lot agencies that are doing work there, plus a lot of the NGO’s —  Trout Unlimited and The Nature Conservancy — and you have interesting legislation because of salmon and steelhead that are listed under the Endangered Species Act,” Page says. “There were a lot of pieces in place to do conservation on a pretty large scale.”

He’s working on multiple projects to benefit sage grouse in partnership with the NRCS as part of the Sage Grouse Initiative (SGI). He’s also working on conservation projects to improve water flows for endangered salmon and steelhead. 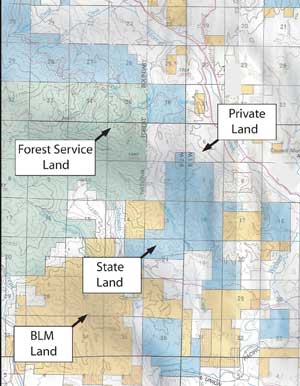 Tom Page is a big advocate of “All Lands Management,” a concept in which cattle management prescriptions can flow from one ownership to another.

“Right now, it’s easier to do conservation on private lands, quite frankly,” he says.

“I like also that the SGI program works effectively with the federal lands  and state agencies as well, because there’s so much different land ownership in this area that if you had a program that only works like this … it’s hard to make it work up here.”

“I like also that the SGI program works effectively with the federal lands  and state agencies as well, because there’s so much different land ownership in this area that if you had a program that only works like this … it’s hard to make it work up here.”

Page is a big supporter of “All Lands Management” where you manage multiple ownerships as a whole. That way, initiatives to benefit fish, wildlife and rangelands can occur seamlessly from private lands to public lands.

Conservation initiatives to benefit sage grouse and wildlife in the Goldburg Meadow are a perfect example of how All Lands Management works. Page keeps his cattle grazing on state land grazing allotments above the private meadow in the spring — when the wildlife are raising young — and then he uses solar fence to set up multiple pastures inside the meadow to manage livestock grazing after the cattle move in.

The results are looking good so far. 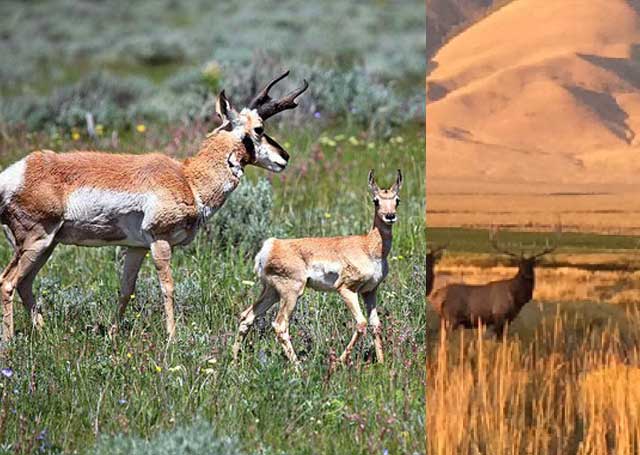 Elk and antelope like hanging out in the Goldburg Meadow.

“The more I’m up here, the more little things I see happen that are pretty neat,” Page says. “For instance, the antelope didn’t used to fawn here. I’ve seen that. I’ve seen more and more elk show up in here. And we’re seeing more curlews, too.  Just spend time up here, and you realize it’s pretty awesome.”

By fencing off a spring in the Goldburg Meadow, Page is seeing more sage grouse using the area, too.

“This spring, Grave Springs, had not run prior to 2010 for about 30 years,” Page says. “The sage grouse have loved it in here in the last couple of years. This is one of the spots where you can almost always find them late in the summer.  I’ve had days when I’ve seen 30 or 40; sometimes eight or 10.” 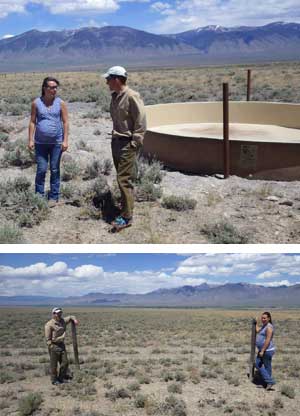 Top, Rosana Rieth of NRCS and Rancher Tom Page check out a new stock-water tank and well that Page developed on his Grouse Creek property to keep cattle on the uplands and away from the Pahsimeroi River during the fall salmon spawning season. Above, Page and Rieth frame an old sheep fence that Page is tearing out to remove barriers for cattle and wildlife adjacent to a BLM grazing allotment.

About 15 miles down-valley, Page teamed up with the NRCS and SGI to remove 29,000 feet of old sheep fence on the 475-acre Grouse Creek ranch property. This is another example of the “All Lands Management” concept. The private parcel is surrounded by a 35,000-acre BLM grazing allotment.

“So the project does a couple of things,” Page says. “Taking the fence out, obviously, is good for sage grouse with a lek nearby. But also, operationally, it will allow this private land, well and tank to be used by the permittees.”

By developing the water source for livestock, it will keep the cattle grazing in the uplands in the fall. This will keep cattle away from the Pahsimeroi River when the salmon are spawning.

“It was easiest to do this on private land than it was to attempt it on BLM land,” Page says, noting the lengthy permitting requirements involved in siting a project like that on BLM land. “By taking the fence out, as the cattle come off the Forest Service allotments and drift this way, by having the tank here and no fence, they’ll utilize this far better.”

Page expects to donate the 475-acre Grouse Creek property to the Lemhi Regional Land Trust in 2015, but he will retain the grazing privileges. He also has finalized three conservation easements with The Nature Conservancy regarding the management of his ranch properties in the Pahsimeroi Valley, and he’s working on a fourth conservation easement with NRCS regarding the Goldburg property. The easements codify conservation measures that have been implemented so they continue in perpetuity.

“I think the easements will yield changes that we’ve already started to institute,” Page sayus. “The on-the-ground stuff like changing a fence, putting in a new head gate, or creating more water efficiency, I see those differences big-time. You sort of need five to 10 years after you do them to see if we get success.”

Big Creek Ranches is one of 10 members of the Central Idaho Rangelands Network, an ad hoc group of conservation-minded ranchers in Central Idaho. Page sees the network as being helpful in pushing for more conservation gains and innovative management on federal lands. 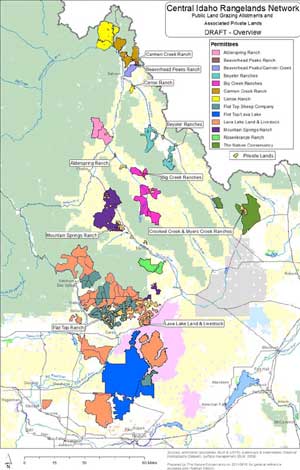 “OK, so we do all of this great stuff on private lands,” he says, “and it’s integrated with all of the state and BLM, but if we don’t have a sense for how the state and the BLM are going to operated in the future, is that a really-good long-term investment in private lands and managing them well?”

The network of ranchers collectively control about 80,000 acres of private land and 1.5 million acres of state and federal land.

“I think one of the things we have going for us is strength in numbers,” Page says. “If you have nine guys who have done really good stuff on their private lands, and they control over 1 million acres of federal and state grazing permits, to say, “Hey we support this collectively.” I think the agencies, they listen more.”